A Hollywood Star Calls for America to Kick Trump Out of Office - Via a Coordinated, Total Economic Shutdown 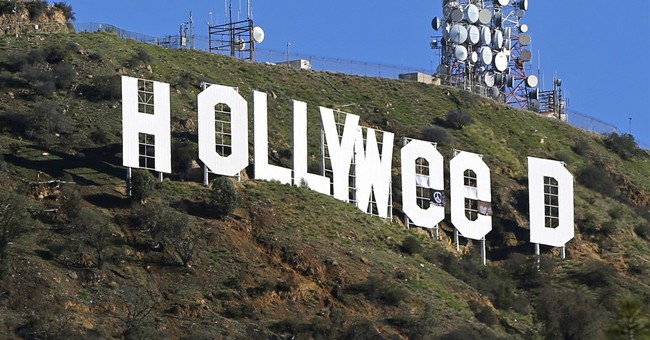 FILE – In this Jan. 1, 2017, file photo, the famed Hollywood sign is seen altered to read “HOLLYWeeD,” in Los Angeles. Los Angeles police said in a statement that 30-year-old Zachary Cole Fernandez was arrested Monday, Jan. 9, 2017, in connection with the vandalism. Police say Fernandez turned himself in with his attorney and was booked on suspicion of misdemeanor trespassing. (AP Photo/Damian Dovarganes, File)

A major Hollywoodite is calling for all concerned citizens to unite in protest in March.

Ornamented with the hashtag #RESIST, Patricia Arquette — star of True Romance (a great movie, by the way) — explained it thusly:

“On Monday, March 2nd, there is an Economic Shutdown. #Shutitdown. It’s easy.”

So how do we do that easy thing? Like this:

“Do not spend any money on anything anywhere.”

“Our goal is to cause a $238.2 billion dollar blip on the federal government’s records.”

Arquette posted images of tweets, which described the shutdown as a way to create a “1-day ripple in the US GDP.” That same Twitter user said in another post: “Our goal is $238.2 billion, the equivalent to one day of the US GDP.”

It’s unclear who that person is but their bio claims “Ret. Federal Reserve Board.” Arquette appeared to see the economic shutdown information after musician David Crosby retweeted that user.

What follows is his/her thorough explanation:

“AMERICANS: If you want to remove Trump, there is one way to do it. On March 2, 2020 we’ll do the economic shutdown from 12:01 a.m. to 11:59 p.m. Don’t buy anything, anywhere, spend no money. If you have autopays, leave them alone. If you have a mortgage due, pay it the day before. The nation’s daily GDP is $238.2 billion. We won’t hit that, but we can wake up the politicians & the government will know. Several small businesses have told me they’ll open, but they personally won’t spend any money. Tweet, FB, call, E-mail your House Reps & Senators & tell them you’re participating. Then we’ll do another one in April, May, June, July, August, September & October. There is only one thing Trump & the GOP understand; that is money. This will not cause us to go into a recession, but it will slow the economy down. The US is the most powerful country in the world. We can do this. It will show the GOP that Americans are coming together & we’re demanding changes starting with the removal of Trump. Remember: Economic Shutdown, don’t buy anything on March 2nd. Emergencies excepted.”

AMERICANS: If you want to remove Trump, there is one way to do it. On March 2, 2020 we'll do the economic shutdown from 12:01 a.m. to 11:59 p.m. Don't buy anything, anywhere, spend no money. If you have autopays, leave them alone. If you have a mortgage due pay it the day before.

Back to Patricia, not all the Instagram comments were positive:

–“This has a real chance to be the dumbest thing ever. Don’t be proud of that either. #dumbass #maga #trump2020”

–“Your lack of education and any deep thought are shining brightly fool (accompanied by the turd emoji).”

–“You are #crazy to preach this #jobkiller [of] an idea. You are a washed up #spoiledrotten #delusional celebrity. How about #resisthollywood”

There were a few “bubble” remarks as well.

With all respect to Patricia — who I absolutely love — and other would-be revolutionaries, there’s no way in the world Americans are going to come together, for any reason at all, and withhold nearly 250 billion of their hard-earned dollars.

Secondly, Americans have all that money to spend because the economy is doing well — a reason to not want change.

Thirdly, America voted Trump in, at a time when they had no idea what he might do. If an election was held on March 2nd, he’d win again. And not liking the President doesn’t mean there are enough likeminded folks to change who’s in the Oval Office via massive non-electoral dictate. There ain’t.

While some anti-Trump rallyers are decrying the state of the union, there’s a whole world out there that’s fine with it. And on March 2nd, they’ll be using their money for the reasons they worked so hard to acquire it: to take care of themselves and their families.

Meanwhile, it seems to me, there’s really nothing to #RESIST — Trump was voted in as President, a reality that doesn’t depend on anyone’s acceptance.

Similarly, for me, there’s nothing to “resist” about Patricia — I don’t need to join her mission in order to admire her work. And if you haven’t seen True Romance, I highly recommend it.

She was also fantastic in later episodes of Boardwalk Empire, starring the great Steve Buscemi. If those aren’t your cup of tea, consider her in Adam Sandler’s Little Nicky.

Anyway, D-Day is coming. If some aligned against the President have their way, a bunch of people will hold on to their cash. But here’s my prediction: For the vast majority of any who keep from forking over their dough that Monday, they’ll double their spending on Tuesday. Within at most three days, they’ll have made up for what they didn’t spend. And so will the U.S.

Not even in Hollywood.

Bend It Like Beckham? Soccer Player Receives a Half-Decade Suspension for Savagely Biting His Cupless Opponent

Jon Voight Manhandles Monolithic Hollywood: In Less Than 100 Seconds, He Delivers His Own State of the Union – and Praises Trump’s