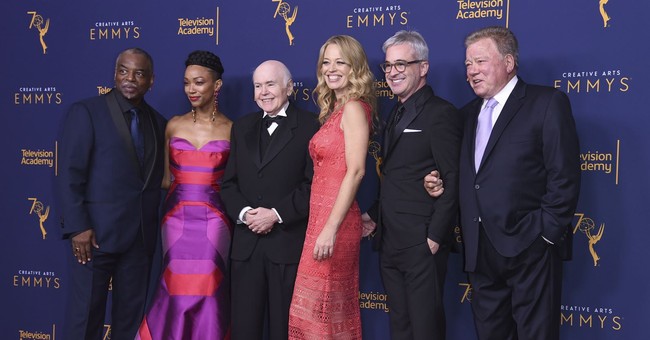 LeVar Burton, from left, Sonequa Martin-Green, Walter Koenig, Jeri Ryan, Alex Kurtzman and William Shatner pose in the press room after accepting the Governors Award for “Star Trek” during night one of the Creative Arts Emmy Awards at The Microsoft Theater on Saturday, Sept. 8, 2018, in Los Angeles. (Photo by Richard Shotwell/Invision/AP)

Star Trek’s Chekov is down on the Trump folk.

While speaking to Salon Monday, legendary Trek actor Walter Koenig — Pavel Chekov from the original series and its related films — called this current state of the nation “a particularly heinous moment in American history.”

A huge reason: Trump-centric “vitriol.” In fact, the utopian future imagined by Gene Roddenberry provides an escape of sorts from POTUS’s treachery:

“The state of the world is dreadful. It depresses me to no end. Star Trek is a welcome respite from the infamy of the Trump administration and all the problems we are living with.”

And it’s not just the Commander-in-Chief, but his supporters:

“I think this is a particularly heinous moment in American history with Donald Trump. This is not only because of a few individuals who now have control of the government but that there is so much support for them.”

Does Trump and a handful of others “have control of the government”?

Either way, it appears that you and the Leader of the Free World are willing to give up the good stuff to fulfill the visions of hellfire:

“There’s so much vitriol, discontent and anger. These people are willing to sacrifice the good things in our culture and in our life to support evil things. We as a country and a culture have not gotten to a positive place of progress from which we are not willing to retreat from.”

To Walter, it’s a forgone conclusion, it seems, that we all recognize the good guys — like the last guy:

“It just goes on and on. We have the good folks, the people that we believe in. For example, when Barack Obama became president, I thought to myself, ‘My God. We have really turned a corner. I am so proud to live to see this happen.’”

But then it all got messed up:

“And then we have Donald Trump. There is a certain despair that follows me, that haunts me, because we’re still doing the same things.”

But don’t worry — we’ll be rid of this wave soon enough:

“If we do not have hope, then we’re surrendering. Then we’re giving up. Hope may be temporary. It may last for five years or 10 years. We are driven to make things better. We have that dream to make a better world.”

Chekov isn’t the only one dunking on The Donald. As noted by The Daily Wire, Trek icon Sir Patrick Stewart told Variety the new Star Trek: Picard is a reflection of this current darkness:

“In a way, the world of Next Generation had been too perfect and too protected. It was the Enterprise. It was a safe world of respect and communication and care and, sometimes, fun. [The new show is] me responding to the world of Brexit and Trump and feeling, ‘Why hasn’t the Federation changed? Why hasn’t Starfleet changed?’ Maybe they’re not as reliable and trustworthy as we all thought.”

Variety looked to affirm the mess — it referenced a need for “calm in anxious times.”

These days, Next Generation-style sophistication is out the window.

Want more Trek trouncing Trump? George Takei — the franchise’s Sulu — has got ya more than covered.

In November, he asked:

“Imagine: The November 2020 election is over, and Trump has lost. And yet, he signals that he does not intend to leave office. Will you take to the streets, as people around the world have done, to preserve our democracy?”

Imagine: The November 2020 election is over, and Trump has lost. And yet, he signals that he does not intend to leave office. Will you take to the streets, as people around the world have done, to preserve our democracy?

Holy Cripes, the World is Changing – Rashida Dumped All Over Hillary (Video). But Then it Changed Back

Everyone Who Hates Trump, Hold On to Your Hats: Someone Who Works Closely with Him Reveals a Man You Haven’t Heard About

Trust Her, She’s Not a Doctor: Elizabeth Warren Masterminds the Coronavirus, So Get out Your Unicycles and Pedal to the Cure