In the most recent round of violent protests that have rocked Greece, a group of aggrieved Communist party members went up onto the Acropolis and hung banners from the massive rock. “Down with Dictatorship” they proclaimed (in English as well as in Greek for the benefit of the western media and/or relevant parties in London and Washington, D.C.). 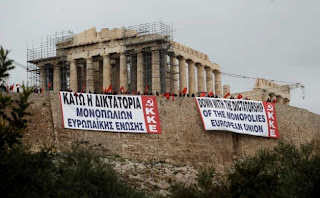 The message was not particularly subtle: Here, in the birthplace of democracy, Greeks would once again stand up to their oppressors and claim their ancient freedoms. At the very feet of the Parthenon they made their stand, with the ruins of the classical past providing witness.

The juxtaposition between the “birthplace of democracy” and Greece’s current budget woes has been echoed in the media, illustrated with video of Athenians torching Starbucks and Cinnabon. What this analysis fails to recognize is that the contemporary Greeks are rejecting their own heritage as they riot not for freedom, but against it.

The Parthenon has been caught up in this irony, as it has been in so many previous conflicts. Originally constructed as a monument to the successful–and near miraculous–defeat of the Persian empire by the Delian League in the early 5th century BC, the monument became the symbol of the small but doughty Athenian democracy that has been the touchstone for subsequent attempts at free governance. Rome, Venice, Florence, Holland, Great Britain and the United States have in turn claimed classical Athens as an ideological ancestor. Rose-colored glasses notwithstanding, the Parthenon represents the best of the western tradition, the urge towards political freedom that enables prosperity and culture.

Alas, the Parthenon today is but a shadow of its former self. While it survived for centuries in the post-classical world as a church and then a mosque, it was blown up in 1687 in an accident rather similar to the one that destroyed the Attikon theater in Athens over the weekend. The precarious ruin that is the contemporary Parthenon is undergoing a restoration in which each block of marble is removed, studied, and replaced in the archaeological equivalent of Humpty Dumpty.

The philosophical legacy of the culture that produced the Parthenon appears to be in similar tatters. According to Pericles, the building’s patron, the strength of Athens was its self-sufficiency:

Again, we are contrary to most men in matter of bounty. For we purchase our friends not by receiving but by bestowing benefits. And he that bestoweth a good turn is ever the most constant friend because he will not lose the thanks due unto him from him whom he bestowed it on. Whereas the friendship of him that oweth a benefit is dull and flat, as knowing his benefit not to be taken for a favour but for a debt.

In other words, free men should never aspire to handouts, or embrace the dull and flat dead end that is debt. It is ironic indeed that the Parthenon now stands over the banners demanding benefits be bestowed on the Greeks. The enemy is no longer the invading Persians or rival Spartans, but rather “the monopolies” and the European Union who threaten to deny the favours decried by Pericles.

The Parthenon is fragile–not just the beleagured, damaged structure itself, but also the aspirational ideal it has come to represent. Those who believe independence is still worth pursuing should take note of its inglorious appropriation by the forces of dependence in Athens. New Parthenons in Philadelphia and Nashville attest to the influence this structure has had over our democracy. The original may well be beyond saving at this point, but we can preserve its legacy.

Peter Doocy and Jean-Pierre Get Into Heated Exchange Once Again
Townhall
A Twitter user posted CHANI's career benefits and people have questions … and jokes
Twitchy
Kari Lake Drops the Hammer on Liz Cheney After Pathetic Attack
Redstate
CNN to Be Sold to Fox News? That Would Be Hilarious
PJ Media