#YallQaeda is the clever hashtag the left were using Sunday night (in addition to #oregonunderattack) to throw fits of pique and demand summary executions of the armed militia members in Oregon occupying a federal government shack in the woods over the weekend. You know, because the left takes it so seriously.

If you’re not up to speed, here is a summary. On Saturday, there was a protest in Oregon over ranchers who are being sent back to jail because some judge decided they didn’t prison enough yet for a couple of small fires that damaged some precious federal government-owned grass. From that peaceful protest, a few protesters, who were armed, occupied an empty building likewise owned by the federal government that is the headquarters for key national security asset known as Malheur National Wildlife Refuge Strategic Command And Tactical Nuclear Deer Population Control Bunker, hereafter referred to as “the shack.”

Reports over the weekend have placed the number of men who “took over” the empty building at anywhere from less than ten to over 150, though if you look at the picture below, 150 is harder to swallow than a cheek full of chaw. 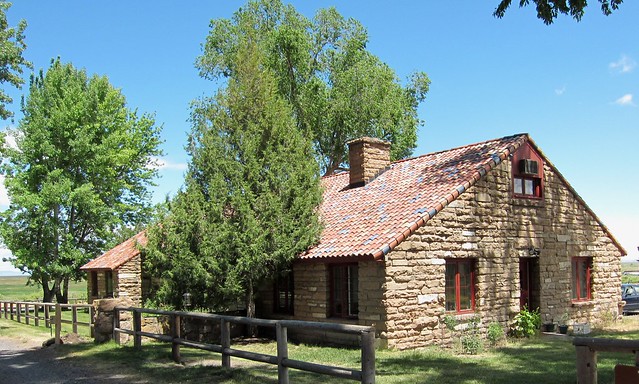 Still, whatever the numbers, no one has been shot nor has anything been set on fire, although the mainstream media cites “reports” that some of the militia-members (which is how the men referred to themselves, we are told) have vowed that they are prepared to kill or be killed in defense of their strong belief in remaining in the shack.

If it seems like this is a minimizing of what is taking place, I would only say that it really isn’t, and even if it was, if I may paraphrase: every reaction has an equal and opposite reaction reaction. And that of the left has been nothing short of spectacularly “over” on the reaction scale.

As an example, let’s start out by taking it right to eleven.

That is a very real headline from the International Business Times. “Armed militia insurgency“?? Fam. For real? In some places in America, a few rednecks with rifles in a government building is called “a weekday.”

Totally fine with a massive use of deadly force in Oregon to take out Ammon Bundy. #OregonUnderAttack pic.twitter.com/A9F90qnBaW

That tweet was sent at one in the morning Sunday morning. Mere hours after the armed rotary club started hanging out at the park. Hours. And straight to “hey let’s throw them in a mass grave and get ready for church.”

This was not a unique sentiment. The glee, the absolute savoring of the moment by the left was so thick and hot I cut a few patties off it and made burgers. They are beside themselves. And of course we know why. It was Samuel L. Jackson who gave up the game only a week or so ago when he gave voice to the left’s angst:

“And I can’t even tell you how much that day the thing that happened in San Bernardino — I was in Hawaii — how much I really wanted that to just be another, you know, crazy white dude, and not really some Muslims …”

They want that so bad because they can’t stand the idea of having to take sides against an enemy of America who doesn’t have a convenient (R) after their name. “Oh if only a white person would just blow themselves up at an embassy ONE TIME.” When news broke that some dudes with some guns were on the inside of a building, leftists couldn’t wait to take to Twitter and compare tumescence. And thus engorged with blood they lust for more.

The best summary I’ve seen was the following from Twitter:

Catching up on twitter, I guess the hot center-left, progressive opinion of the day is that the federal gov't should slaughter trespassers

I couldn’t have said it better myself.

PERSPECTIVE BREAK
Revisiting a less hysterical reality for a moment, a local reporter who was on the scene (as opposed to say, Jonathan Chait, who was merely engaging in long-distance pillow talk) said on Twitter that he spent a lot of time at the “calm, quiet” scene where there were “no signs of damage” “How’d they get in?” he adds. “They found a ‘stack of keys.'”

One of the most timeless and stirring cries of any insurgency in history is, of course, “hey y’all, I found some keys next to this cooler!”

As Jazz Shaw noted at Hot Air, part of the reason for the hateporn fest among our intellectual superiors is the involvement of the Bundy family. The Bundy ranch incident, or as the left remembers it, “the greatest Civil War battle America ever fought”, was similarly a time when liberals flocked to social media to declare that profiling was over and the jihad was a lamb compared to the wolf of American right wing nutjobs, as you may recall.

You may also recall that no one was shot or set on fire there, either.

Liberals in the media have called for and demanded to know why there isn’t a massive government intervention here. They explain that the National Guard was called in to Ferguson and Baltimore – where shootings, lootings, fires, and assaults actually did, you may even further recall, take place – but somehow fail to bring up all the times they were totally against massive government intervention, such as in Ferguson and Baltimore.

Still, it is not a situation without danger. One hopes this sort-of standoff will end peacefully and without gunfire. (At the time of this writing, about 1 a.m Monday, nothing has changed.) One hopes those who engage in civil disobedience are prepared for the consequences of that action. Given the temperament and beliefs some of the men in the facility may hold, this is not a guarantee.

One also hopes that people will realize the two ranchers being cruelly and unusually mistreated by a no-doubt activist judge have nothing to do with the occupation of the government building and seem to have every intention of returning to jail for their arbitrary new prison sentences peacefully and on time.

But one, and by one I mean myself, sincerely hopes people don’t forget the absolute bloodlust of the left and their insane overreactions to the situation in Oregon. Which reminds me, they had one other Very Serious hashtag they were using overnight to express their deep and dear desire for bloodshed: #VanillaISIS. Because it’s white people terrorism, get it? Ha ha! LIKE THE RAPPER.

See this is deadly serious, you guys. And lefties are deadly serious people who think seriously about serous things and whatever.


PERSPECTIVE BREAK
I suggest reading this article from Hot Air’s Taylor Millard. A good reminder to take news reports and Twitter descriptions with a grain of salt. Or, you know, a spoonful.

Finally, I urge you to note on left blogs and left Tweets the ceaseless, earnest, angry demands that the militia members be referred to as “terrorists.” I ask you to note this because these are the same people who scoff at the idea that using the word matters when it comes to Obama talking about incidents such as San Bernardino, Fort Hood, or Chattanooga.