Democrat Candidates and Issues Have Left Their Voters Behind. One Graph From @ezraklein Shows Why.

Candidates and issues, naturally, follow the money. It was my unscientific opinion throughout the Obama Administration that their politicians and policy were to the left of 85% of the electorate, and as we will see the results of the November election seem to validate that estimate.

Ezra Klein wrote an article at Vox.com in July 2014 with the clumsy title “A stunning graph on how money polarizes politics.” I blogged about it here; in the aftermath of Tuesday’s election, it’s worth revisiting (but not linking).

Ezra pointed out that fewer than four percent of voters contribute to political campaigns, and only 1/2 of one percent exceed the Federal reporting limit of $200. He used the graph below to demonstrate that the bulk of the money flows from political extremes.

Note that the “liberal” peak of donors is considerably narrower, and several points more extreme, compared with the “conservative” peak.

Graph #1 represents the 96% who only vote. It’s something like a bell-shaped curve skewed leftward. To compare it with the money donor graphs, I colored it orange and superimposed it on graphs #2 and #3. I also added a vertical dotted line to indicate zero, “neutral” on the issues. (The charts are slightly blurry because the originals are not perfectly registered.) 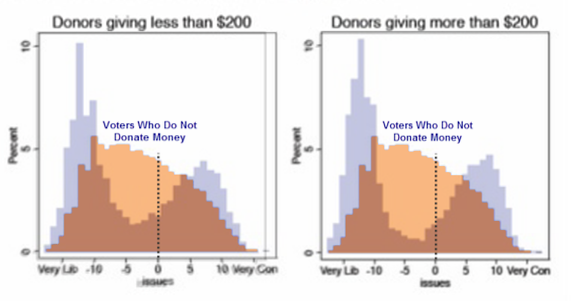 Peak Liberal Cash (especially in the big-donor graph on the right) is the domain of George Soros, Tom Steyer, Silicon Valley, trust fund babies, leftist academics and media elites. On this scale, its center of mass scores about -13 vs. -5 or so for the typical (non-donor) voter. In fact, the gaping chasm between radical left-wing money and their average voter is quite startling.

On the right-hand side, Peak Conservative Cash is about +8 to +9 vs. +5 for the voters. A gap, yes, but not too dramatic.

Imagine a slightly left of center voter, say -2 or -3 points on this scale. Maybe he/she is liberal on social issues but more centrist on economic and military policy. Given the skewed and extreme positions of Democratic money/candidates/policy, it’s easy to see that the message on the right may have more appeal.

The Democratic Party correctly judges that it lost its grip on the working class, “hidden” Trump voter. (Pssst — he/she’s hiding in plain sight, right in the big orange gaps in the graphs above.) The Dems’ response is to consider Keith Ellison for party chair and to let Lena Dunham and John Oliver represent the party in cultural outreach. This should be fun. Pass the popcorn.