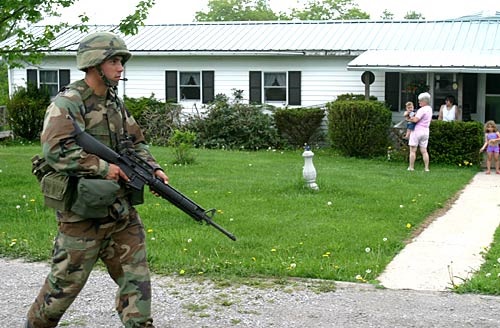 Earlier this week, I wrote an article about how school shootings could lead us to the creation of a nationalized police force. In that piece, I documented how groups like the Congressional Black Caucus and race-baiting activists like Al Sharpton teamed up with Barack Obama to lay the foundation for the federal government to assume power over local police using the DOJ and a Police Czar.

Always willing to use the color of a person’s skin as a basis for creating policy, Obama had some limited success in moving the country toward a police state, but he stopped short of using America’s armed forces to accomplish his goals. However, if a professor of philosophy at De Paul University in Chicago has his way, Donald Trump may end up going where Barack Obama has never gone before.

In a public plea to Trump, published at TheHill.com, Jason D. Hill—whose specialties as a professor include ethics, social and political philosophy, and the philosophy of education and race theory—wants to bring an end to “genocide among black Americans” in Chicago.

To do this, Hill wants Trump to send in the military to “quiet our streets and restore safety to at-risk neighborhoods.” Hill is suggesting that Trump “use his powers to suspend the Posse Comitatus Act” to free up the military resources “necessary to stem the violence overrunning Chicago.”

“I implore you to use your powers to suspend the dated Posse Comitatus Act, which unfairly limits your ability to use domestic militarization to respond to crises, and send in the resources necessary to stem the violence overrunning Chicago.

“Posse Comitatus makes no mention of the use of the militia, the National Guard, the Navy or the Marines. You can suspend this law and send in the forces necessary to quiet our streets and restore safety to at-risk neighborhoods.”

The Posse Comitatus Act is a federal law signed in 1878 by Pres. Rutherford B. Hayes, designed to limit the power of the federal government to use the military to enforce domestic policies within the US. Though updated since its inception, and even though there’ve been a few tweaks since 911, the original intent of the act remains in effect.

Can Trump override PCA? Yes and no. It can be suspended for things like natural disasters and terrorist attacks, but it can’t be overridden for the purpose of enforcing state laws. This question is secondary, however, to the disturbing suggestion that we create a militarized home front.

By the way, Trump has already shown a willingness to use federal power to deal with gun violence in Chicago.

Besides being inconsistent with the values of liberty and freedom we enjoy as a Constitutional Republic, Hill’s request perpetuates a growing acceptance in America that we should voluntarily surrender our Constitutional rights to the federal government in exchange for safety.

Additionally, Hill holds a position of power as a teacher where he is free to spread Democratic-Socialist ideals such as this to the next generation—a situation made more dangerous by Washington politicians who have made destroying the Constitution standard operating procedure in order to increase their power over us.