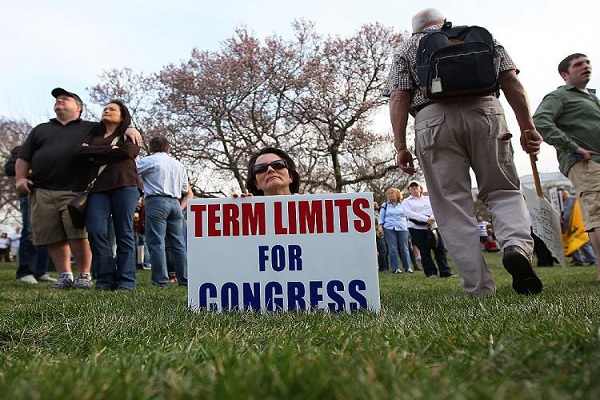 As the approaching Blue Tsunami reaches Category 5 levels the closer we get to the November election, and with the GOP election year playbook failing to keep them from being wiped out, the party formerly known as Republican is pulling out all the stops in a last-ditch effort to save itself from total annihilation.

To date, the only “winning” accomplishments Trump and the GOP have to offer is Neil Gorsuch, tax cuts, and the budget-busting Omnibus passed a few months ago. However, with Neil Gorsuch’s recent vote overturning a law that allowed for the deportation of immigrants convicted of violent crimes, and with Planned Parenthood, Obamacare, and sanctuary cities all getting a payday from the Omnibus, voters aren’t buying what the swamp is selling any longer.

With their playbook failing them, Trump and the GOP are joining hands with the newly formed Trumpservatives to offer a new set of campaign promises they never intend to keep.

Trump and Trumpservative Mark Meadows have recently expressed their support for Congressional term limits, an issue that conservatives have been advocating since the days of the Republican Contract With America in 1994.

I recently had a terrific meeting with a bipartisan group of freshman lawmakers who feel very strongly in favor of Congressional term limits. I gave them my full support and endorsement for their efforts. #DrainTheSwamp

Our founders never intended Congress to be a career–part of why Washington has become so dysfunctional is the shift away from this principle. Congressional term limits would do wonders toward addressing the problem.

By the way, the CWA was also supposed to subject Congress to the same laws as the rest of us and add a balanced budget amendment to the Constitution. Just sayin’ . . .

Now, you may be wondering why a supporter of the Convention of States project—such as I am—isn’t doing somersaults over this proposal since it’s one of the goals of the COS. Well, as I just pointed out with the Contract with America, we’ve heard promises like this before from Washington politicians, but when push comes to shove, it goes nowhere.

The simple fact of the matter is that this is an easy promise for Republicans to make because they know they’ll never have to put their vote where their mouth is. A Constitutional Amendment is required to make term limits a reality, and there aren’t enough votes from members of Congress, who benefit under the current situation, to pass such an amendment.

One of the freshmen lawmakers Trump met with is proposing a bill to get the term limits ball rolling, but it fails to meet the objective because it grandfathers in sitting members of Congress, meaning that the swamp can stay as long as it wants. It would be decades before we’d see the benefits of term limits under this proposal, and by then, it will likely be too late.

As we witnessed with the Contract With America, leaving it up to Washington politicians to do what’s right to get America on track will fail; they simply have too much to lose in the way of perks and kickbacks under the current scenario.

Only by taking the power away from Congress and returning it back to “We The People” will we see our Constitutional Republic saved.