For about a week now, we’ve been following the saga of the MiGs-for-Ukraine program.

Poland, it seems, came up with the idea of transferring MiG and Sukhoi aircraft flown by Poland, Slovakia, and Bulgaria to Ukraine. Here is how I describe it in Did Blinken Put Poland Outside NATO Protection if It Transfers New Fighter Aircraft to Ukraine?

After the Russian invasion of Ukraine, former Warsaw Pact countries who are all too familiar with the fraternal leadership of Russia were quick off the mark to supply Ukraine with weapons and supplies to allow them to resist Russia. Some countries put together a plan to provide the Ukrainian Air Force with 70 additional fighter or attack aircraft: 56 MiG-29s from Poland (28 aircraft), Slovakia (12), and Bulgaria (16), and 14 Su-25s from Bulgaria.

The plan was for the aircraft to be ferried to an airbase in Poland, where they would be married up with Ukrainian pilots and flown home. I have some questions about the whole plan. The Western MiGs and Sukhois are not off-the-assembly-line aircraft. They have Western avionics, and their powerplants have been upgraded. As such, they are not the same aircraft operated by the Ukrainian Air Force. I haven’t read any authoritative account of how the Ukrainians plan to maintain these aircraft, and one can’t help but wonder if the plan isn’t to service them in Poland, fly them to a base in Ukraine, run a few missions there, and return to Poland. Last Wednesday, it looked like the whole deal was breaking down. Read the whole story at Transfer of NATO Aircraft to Ukraine Falls Through as Zelensky Resumes His Campaign for a No-Fly Zone.

As it turned out, the deal didn’t break down because it was impractical; it broke down due to the behind-the-scenes machinations of the Biden junta, see Revealed: The Real Reason That Deal to Send Fighter Jets to Ukraine Fell Through.

Once the word leaked out that Biden was the stumbling block, the State Department got out of the way. On Sunday, Secretary of State Anthony Blinken announced that the US was fine with the transfer but did so in a curious way.

Let’s take a moment here to consider what Putin has said. He has declared that an attack on Russian forces coming from any country outside Ukraine will result in Russia considering that as “participation in the armed conflict.”  This quote is in the context of the possible NATO no-fly zone, but here is a guy who claims he wants to “denazify” a country literally headed by a Jewish guy.

In my interpretation, Blinken just told Poland, “You’re on your own, Scooter.” He said you are free to send aircraft to Ukraine, but it is not part of any NATO operation.

Suppose Putin interprets aircraft ferrying from Poland to Ukraine as an imminent attack on Russian forces and lobs a missile or three at the airbase. Would we consider that as triggering the mutual defense provisions of Article 5 of the North Atlantic Treaty?

Well, it looks like the Poles smelled the same rat. Earlier on Tuesday, the Polish government announced it would send their MiG-29s to Ramstein AFB, Germany, and let the US arrange the delivery.

!!! The "Republic of Poland, after consultations between the President and the Goverment, are ready to deploy – immediately and free of charge – all their MIG-29 jets to the Rammstein Air Base and place them at the disposal of the Government of the USA." https://t.co/6NF0Lg8Hak

This is important: Poland's PM suggests a decision to give Ukraine fighter planes (to man its own no-fly zone against Russia) should be a NATO one. He says it's why Poland is ready to move its MiG-29 jets to a US base in Germany "but we're not ready to make any moves on our own"

This seems to have come as a shock to the Department of Defense.

The Pentagon rejected a surprise announcement from Poland that it would give the United States its MiG-29 fighter jets for use by Ukraine. A transfer of the MiGs to Ukraine is fraught with complications and could further inflame tensions with Russia.https://t.co/FN5TxBB60w 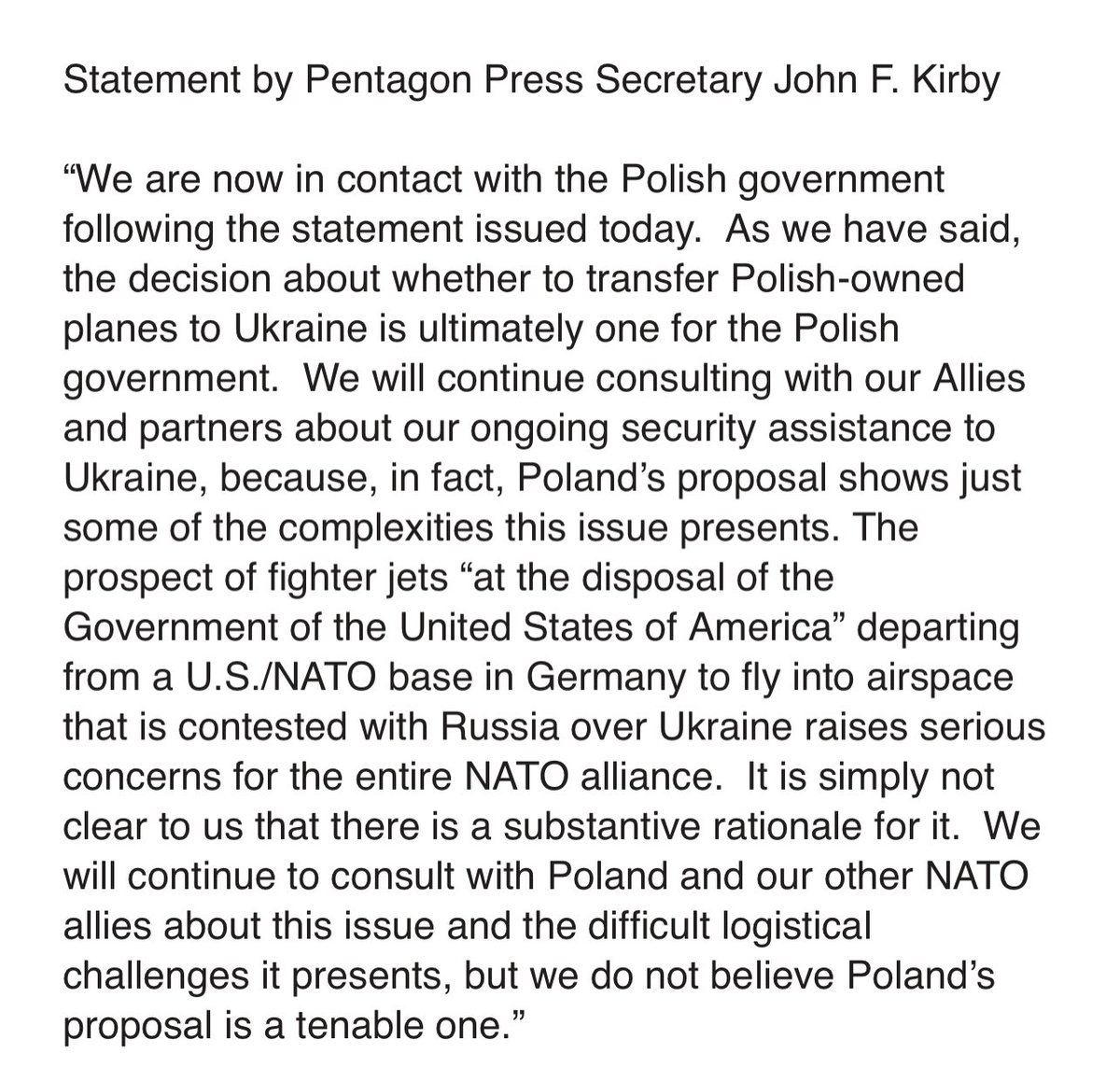 So now we’re back to where we were when the idea was first hatched.

In fact, the Biden junta is being revealed by House Democrats as being at least as duplicitous as we thought. Not only was the White House trying to sandbag the deal and leave Poland holding the bag, the whole “Interagency” was mobilized against it, too.

New: Even before the Pentagon nixed the plan to get Polish MiGs to Ukraine via Ramstein, House Intel cmte members wrote to Jake Sullivan with concerns about “reported impediments NSC associated with the delivery & the NSC's decision on whether/how to backfill the resulting loss” pic.twitter.com/o8VXK6208d

Personally, I can’t see any way these aircraft get to Ukraine without undergoing some disassembly and being sent by rail.

LA Times Op-Ed: I Don't Know About All These Blacks Owning Guns
Townhall
Allow Kamala Harris to explain what the SCOTUS abortion ruling 'means for the life of your son'
Twitchy
France's Emmanuel Macron Drops Truth on Joe Biden About His Insane Energy Policies
Redstate
'Top Gun' Hits Over $1 Billion and the Left Is Going Crazy: Here’s Why
PJ Media