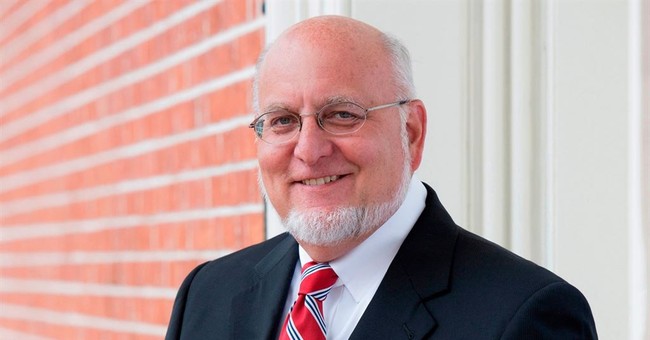 FILE – This undated file photo provided by the University of Maryland School of Medicine in March 2018 shows Dr. Robert Redfield Jr. The government is paying Redfield $375,000 a year to run the Atlanta-based CDC, U.S. officials confirmed in April 2018, nearly twice what his predecessor made and far more than other recent past directors. On Monday, April 30, 2018, HHS officials said Redfield had asked for a pay reduction because the topic had become a distraction.(Tracey Brown/University of Maryland School of Medicine via AP, File)

CDC Director Robert Redfield gave an interview to the Washington Post on the Wuhan virus panic and he made it clear, as have other so-called public health authorities that these people really have no intention of letting us getting back to our lives and they have willing allies in the national media.

Even as states move ahead with plans to reopen their economies, the director of the Centers for Disease Control and Prevention warned Tuesday that a second wave of the novel coronavirus will be far more dire because it is likely to coincide with the start of flu season.

“There’s a possibility that the assault of the virus on our nation next winter will actually be even more difficult than the one we just went through,” CDC Director Robert Redfield said in an interview with The Washington Post. “And when I’ve said this to others, they kind of put their head back, they don’t understand what I mean.”

“We’re going to have the flu epidemic and the coronavirus epidemic at the same time,” he said.

Having two simultaneous respiratory outbreaks would put unimaginable strain on the health-care system, he said. The first wave of covid-19, the disease caused by the coronavirus, has already killed more than 42,000 people across the country. It has overwhelmed hospitals and revealed gaping shortages in test kits, ventilators and protective equipment for health-care workers.

Seasonality, explained: What warm weather could mean for the novel coronavirus
President Trump has said warm weather could slow the spread of the novel coronavirus, but experts explain it’s too early to know if the virus is seasonal. (John Farrell, Elyse Samuels/The Washington Post)
In a wide-ranging interview, Redfield said federal and state officials need to use the coming months to prepare for what lies ahead. As stay-at-home orders are lifted, officials need to stress the continued importance of social distancing, he said. They also need to massively scale up their ability to identify the infected through testing and find everyone they interact with through contact tracing. Doing so prevents new cases from becoming larger outbreaks.

Asked about protests against stay-at-home orders and calls on states to be “liberated” from restrictions, Redfield said: “It’s not helpful.” The president himself has tweeted encouragements of such protests, urging followers to “LIBERATE MINNESOTA!” and “LIBERATE MICHIGAN!”

First, let’s strip away some of the bullsh** the Washington Post is trying to peddle. Even the worst hit state (at least according to its own numbers which are highly suspect), New York, was never short of hospital beds, respirators, ICU beds, or staff. In fact, the major overflow facilities represented by the hospital ship, USNS Comfort, and the Javits Center have seen only a handful of patients. Across the country, the number of deaths is at record lows. Below is a data table from my post If Wuhan Virus Is So Bad, Why Are Deaths So Low?

This is the same data graphed

NOTE: the last week’s data from this year drops precipitously because the data were only 58% complete when I downloaded the dataset. The x axis is not labeled because I’m too lazy to manually insert the labels, they are available on the table.

By itself, this is no big deal. There is no human intervention that is going to eradicate the Wuhan virus, it is part of the North American ecosystem forever. Of course, there is going to be a ‘second wave’ and a ‘third wave’ and a ‘fourth wave’ and an ‘nth wave.’ But this statement does not exist in a vacuum. Let’ go back a couple of days to an interview given by Dr. Anthony Fauci of the National Center for Allergy and Infectious Diseases and one of the key architects of the national response to the Wuhan virus (read Dr. Fauci Decides He Is Galactic Commander and Warns That Protests Will Delay Reopening the Country). In that post, I cover his statements to the effect than an early opening would create a larger ‘second wave.’ But there are two other equally important points. First, the tests being bought from all sources, like the 500,000 my own RINO governor purchased from South Korea, aren’t terribly reliable. As the entire strategy for opening the country is predicated on widespread testing, this seems important. The other point was that there is no evidence that having had and survived Wuhan (which is probably something that 99+% of the people with it do) gives you any immunity. That is entirely consistent with the finding of more than 30 mutations of Wuhan virus, the corollary to that being that there will be no vaccine for this virus.

So, no immunity and no vaccine. What does that mean? It means the people who foisted this disaster upon us are going to try to make us go through lockdown and ‘social distancing’ and all that other crap again in November and again in March. Forever. They have to push for that because if there is a ‘second wave,’ which there will be, and we don’t shutdown again, then they are going to have to answer some very tough questions as to why we did it this time. And they don’t have any answer to that beyond