The Tea Parties Have Spawned a Cargo Cult

The legacy media have paid undue attention to Occupy Wall Street (OWS) over the last month, as compared with the early tea parties. New media, on the other hand, have gone nuts over the relatively small, union-led anti-business protests. Unsurprisingly, many analyses of the two groups have tried to find commonality between them.

Except for superficial mimicry, despite politicians claiming otherwise the two groups are almost nothing alike, and the Occupy movement is doomed to failure.

James Sinclair made a valiant effort at a comparison and contrast, but failed miserably because of invalid assumptions. He assumed that the tea parties are as he describes them (emphasis added):

Both are popular uprisings against powerful-but-nebulous entities believed to be responsible for America’s economic struggles. Both are defined not by easily-identified leaders, but by the sum total of countless unique viewpoints, and thus are not capable of articulating their goals with any cohesiveness or specificity (nor should they be expected to). And both movements, to borrow the classification scheme created by Bill O’Reilly, are teeming with both pinheads and patriots.

Yet the tea parties rose not in response to the machinations of nebulous entities, but to counter the direct and specific threat to our nation posed by the bipartisan response to the 2008 fiscal crisis, and were triggered by the toxic flood of legislative sewage spewing out of the Marxist House, Senate, and President.

The tea parties arose spontaneously, and not as a planned event backed by groups with long histories of agitation.

The leaderless nature of the tea parties is a misconstruction; the tea parties were not and are not leaderless, but each is led by one or more people who organized the rallies.  The movement as a whole refused to become organized, in part because they knew that any leader would be demonized by the left. Also, these people are fiercely independent by nature. Just getting them to join together at the local level is trick enough.

The Occupy movement — with its spiritual roots in the thumb-sucking support group industry —  has taken that a step further to try to be truly leaderless. But it’s a cargo cult of leaderlessness, as if competing with the tea parties to be the most tea partiesque.

With a focus on consensus, one group even ostracized their organizer for attempting to lead them. But that may be simply a symptom of impending doom, like advertising for homeless to join and then discovering that some homeless people are that way because no one else wants them around, either.

The result will be either quickly dissipating groups of squabblers, unsure of their intermediate goals and unsure how to focus, or it will turn into a real mob.  My guess is the former, but if Congress would only pass the American Jobs Act, funding for the groups could doubtless be found and some real direct action taken.

The focus of the tea parties was clear: our government was spending too much, which would eventually lead to higher taxes for us and our children. The spending was and continues to be so outrageous and so unlike anything ever before in human history that tea partiers knew their own generation could not repay it.

Speaker after speaker in the early days rose to say the same thing: Washington was spending too much on items that were unnecessary.

The idea that tea parties are teeming with pinheads is silly. Sure, there is the Heal Maxim of Public Speaking: Everyone has at least one really great idea that becomes horribly comedic when spoken into a microphone.

But the tea parties are full of patriots, not pinheads. Except for the rare exception, they are people looking not to advance themselves but to save a nation. The underlying desire is to preserve the nation and culture in which we grew up to pass to our children and grandchildren.

The tea parties were a spontaneous reaction to rapid change. OWS shows up three years after TARP and the bailouts and claims to be a reaction to those events? It’s ridiculous. With the union involvement and small numbers, OWS has all the hallmarks of an Obama campaign stunt.

The Venn diagram Sinclair produced has made the rounds, and people seem to have accepted it without noticing that it’s incorrect. The tea parties and OWS are not upset at different things. They are upset at the same thing — crony capitalism. But their reaction to seeing it reveals just how different the two groups are. 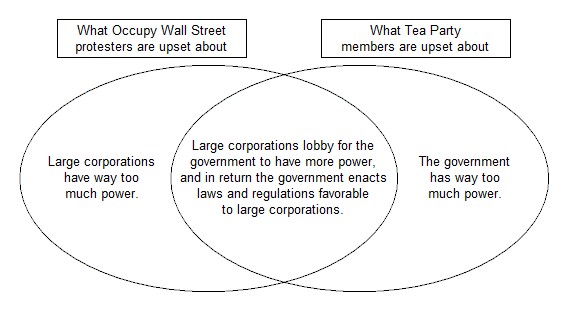 The reason that distinction is important, and the reason I’m writing this, is that the myth of similarity between OWS and the tea parties is rooted in the belief that they’re really just saying the same thing. They aren’t.

It would be better if he square labels said “What OWS protesters believe” or “What Tea Partiers take from it”.

Let’s take a look inside that common area, at the cycle that includes corporate lobbying, government action, and corporate profit.

When the groups are shown the cycle, they see either corporations with too much power or government out of control. Tea partiers generally don’t mind corporate profit, since they know that is economic growth. Occupiers have a general trust of government power.

The tea parties want to clean up government and to limit its distortion of the free market.  OWS want to clean up capitalism, to end what they see as corporate control over government. Actually many in the movement believe that capitalism cannot be cleaned up, and want to replace our current market economy with one based on sharing, equal outcomes, and participation trophies.

The typical OWS protester is sure that the problem with crony capitalism is corporate control of the government, and that what is needed is direct action against the corporations.

But no matter how successful OWS becomes at attacking corporate power, a competitor will always arise to make its mark on government.

Businesses are involved in crony capitalism because government has the power to affect them. Government regulations are so difficult to follow in most industries that in order to gain a foothold, companies need full-time lobbyists to help in the formation of regulations — or to gain advantage over their competitors, one of the hallmarks of cronyism. Companies too small to afford a lobbyist have to make do with their industry lobby, a move which is often in conflict with their interests.

Restated, there is no way to interrupt the cycle at any point except by limiting government power. OWS would like to limit corporate lobbying, but that’s an impossible task (even if it were constitutional).

Some in OWS would like government to increase regulations on business. However, any increase in government power will only allow those currently controlling it, to the extent that they do, to continue to do so. Every increase in government adds to its complexity and to the ability of those who control it to benefit. The bigger it gets, the more pressing the need for a business to carve out exceptions for its particular operation. The more complex it gets, the easier it is for larger businesses to find their carve-out.

Even specific reforms targeting cronyism are unlikely to improve the situation unless government itself shrinks appreciably. As long as government holds the power to regulate businesses, it will also hold the power to favor one over the other. That power will be used.

The answer to the problem of bailouts and crony capitalism, then, is as the tea parties have been saying all along: smaller government that focuses on its Constitutional role.

The left saw the tea parties, and their electoral success, and tried to mimic the superficial features: leaderless groups of citizens in public protest. They saw the protests in Tunisia,  Egypt, and Libya, and dared believe their conditions in America were on par with those faced by people who would self-immolate just to send a cry of help.