On a Personal Note: Pringle

Author’s note: Much as I enjoy writing about politics, legal issues, and the news of the day, sometimes my writing comes from a more personal place. One thing I’m certain is no respecter of party lines is love for a good dog story. And I do mean a good dog. Originally published here:

It’s been exactly one month since we had to put my sweet boy down. I’ve thought many times since about coming to this space to write about him but somehow always found a reason to avoid it. I haven’t been ready to do this because I know where it’s going to take me, emotionally. And I haven’t been ready for that – for a multitude of reasons, not the least of which is overlap with my Dad’s seriously declining health. Call it denial; call it self-preservation. Whatever it is, it’s been a month and, ready or not, I owe this to Pringle.

I did my research before we got him. I knew I wanted a rescue dog — not a puppy. I was a single mom with a full-time job and often away from the house for 10-12 hours at a time. I was also fairly certain I wanted a golden retriever. Given their sweet disposition, I figured a golden would be the right fit for my daughter and me.

I checked out a few pet adoption sites and saw some cute dogs but none that really stood out. I heard about Dirk’s Golden Fund and went online to check them out. They had photos of several dogs, all of whom were adorable and, I thought, worthy of consideration. And then there was this guy: 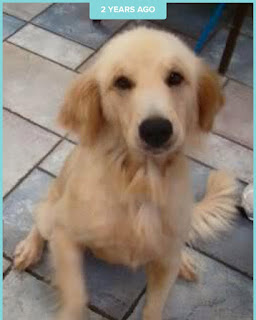 He looked…a bit scruffy. Forlorn even. His “story” was compelling. He was two years old. Per the website, he’d been dropped off by a breeder who’d deemed him “too small and too ugly” to breed. What an idiot. I paid a visit to Dirk’s Fund that weekend and saw several of their doggies – including the little scruffy dude who’d been on my mind since I first saw his photo. He seemed very sweet. I brought my daughter back to meet him – she fell in love – and so did he. That settled it.

We brought Pringle home and he soon adapted to life with two girls and three cats. 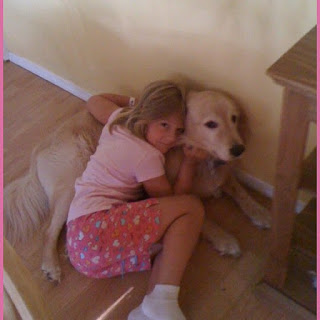 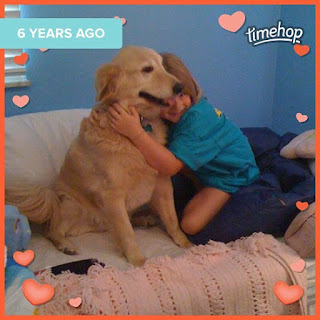 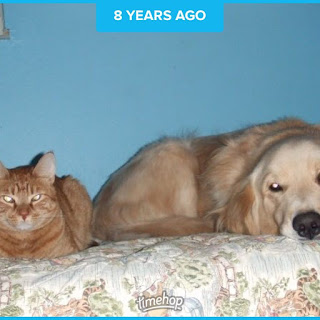 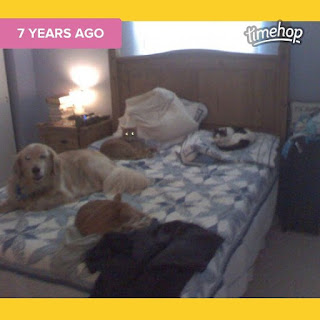 He loved to go for walks around our neighborhood. 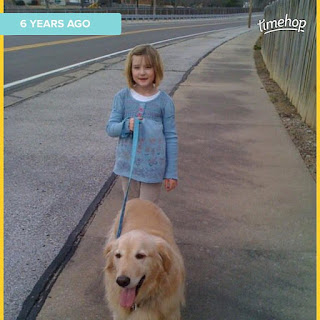 And he adored our big back yard – especially when it was filled with snow. 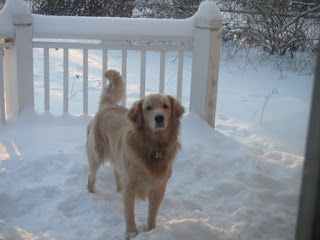 (Remember that stupid breeder who called him ugly?!)

When we moved to St. Peters five years ago, he found another back yard to love. 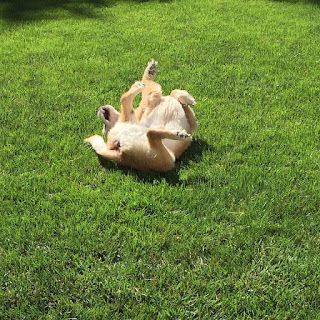 And we were close to a park, which made for lots of great walks and frolics. 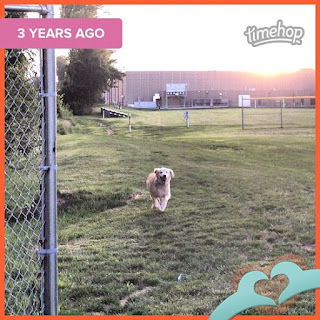 There were even more girls to love (and spoil him silly). 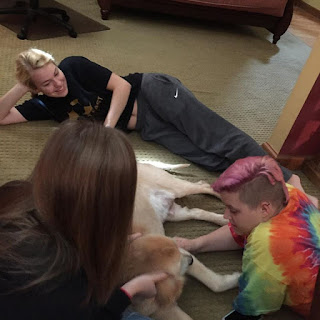 And my beau – who he clearly thought hung the moon. I’m not going to pretend the fact that my beau was the easiest mark for snacks and treats didn’t play a small role in that. 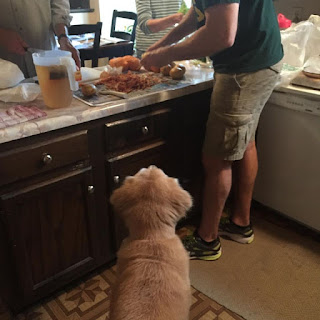 But he loved him over and above the treats. 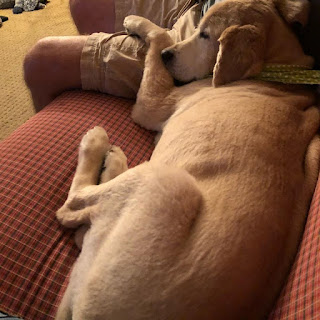 Pringle was a happy dog. He had a spectacular smile. 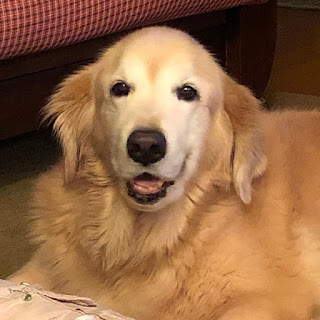 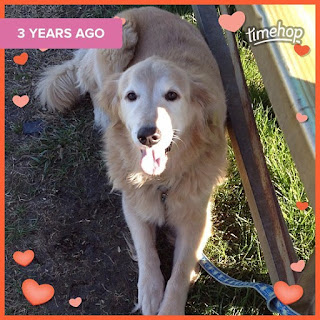 I don’t know that I ever got a picture of it but he had this goofy look he’d give you where he’d bare his teeth in an exaggerated grin. And he knew how to have fun. 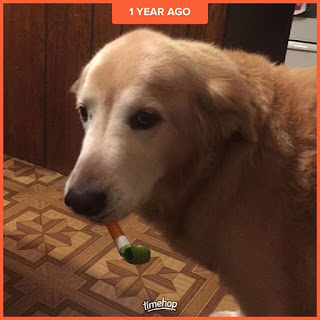 But he also had his more serious moments. 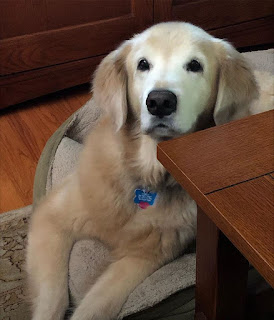 Though a retriever, he wasn’t much for playing fetch. You’d throw the ball and he’d go get it. Once. That was enough of that. His retriever instincts were primarily evident in that he couldn’t stand to greet you without a toy (present) in his mouth. Usually, it was a stuffed animal. But if he couldn’t find one fast enough as you were coming through the door, he’d snag a dish towel as a backup. It was so important for him that you know he was a GOOD BOY.

And he was. He was such a good boy. As I alluded earlier, there were often times when I had to be gone for 10, even 12 hours. And he’d wait patiently until I got home, then run outside to do his business. In all the years we had him, I can count on one hand the number of times he had an “accident.” And he never chewed or destroyed anything other than, occasionally, one of his toys — and even that was over a long stretch of time.

He’d bark when people and dogs passed by “his” house or yard. And studiously ignore other dogs when they returned the favor as he passed by theirs. He’d howl at tornado sirens. And he belched. Like a frat boy who’d just shotgunned a beer.

He loved to be petted and had THE softest fur on the planet. And the sweetest face. Even as he got older, people would often ask if he was a puppy. My (annoying) nickname for him was “baby seal face.”

As I said, he was such a good boy. Except for that one time he got a wild hair while we were visiting the beau’s aunt and uncle and ran off for the afternoon/night. It was a large piece of property — some wooded, some fields. And there were cows on neighboring farms which I felt like were what initially caught his interest and lured him away. We searched high and low for him. Called and called. Listened for the jingle of his collar. Went knocking on doors at the neighboring farms and properties. All to no avail. We had to leave without him and it nearly killed me. I was certain he was lost for good. But he returned to their house, tired and muddy, at 2:00 AM with a neighbor’s dog. They let him in and he ate all the cat’s food. And looked appropriately contrite when we came back to get him the next day. 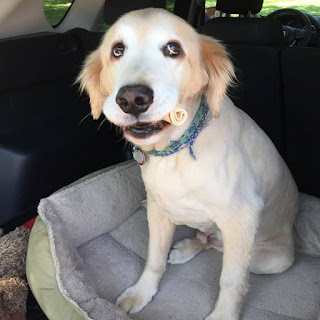 Oh, how I wished he could talk that day – to tell us of his adventures.

But Pringle didn’t really need a human voice to tell us how he felt. He had very expressive eyes and a way of letting you know what he needed or wanted most of the time.

In the last few months, he needed to rest more. He couldn’t really go for walks — not very long ones anyway. And the stairs became a challenge. Sometimes, we’d play this game where we’d do several laps around the house together and THEN trot up the stairs. A few times, I had to resort to carrying him up them. He may have been on the small side for a golden, but carrying 65 pounds of dog up stairs was no easy feat.

I did, too. When we learned he had fluid around his heart in July, we knew the prognosis wasn’t rosy. But he bounced back from that and did pretty well for a time. In fact, I’d just taken him in for a check-up in early October, and he was doing well. Then my daughter called me one evening while I was still at work and said he’d gotten sick and seemed lethargic.

He seemed…okay…when I got home. But he didn’t really want to eat much. I was able to entice him with some of my own food. (Pretty hard for a dog to say no to Steak-Um, I imagine.) It was nice out, so I grabbed a glass of wine and sat out on the deck with him. He sat and then laid next to my chair while I softly patted his head and scritched his ears. He sighed a time or two. I’d like to think with contentment.

I took him to the vet the next day. They had to keep him to run the tests. The vet called with the news after they’d drained the fluid off again — his heart was in bad shape. It was probably time to let him go. I broke the news to my daughter (and broke my heart in the process.) She and I drove to the vet’s office and the beau met us there to say his goodbye. We patted and hugged our sweet Pringle and told him over and over what a good boy he was. We cried. And then cried some more. And then he was gone. Quickly and peacefully. He took a part of my heart with him.

My sweet, sweet boy gave us 11 plus years of unconditional love. He was a constant for me even when other parts of my life were a mess. He was a true friend; a sweet, fur-faced angel.

I’ve kept his bed next to mine. His stuffed animals — Mr. Racoon, Moosie, the Sloth, Ellie, and a few others — occupy it now. Sometimes, I imagine him there, too. I hear a collar jingle, a soft sigh. And I whisper softly, “You are missed, my sweet boy.” 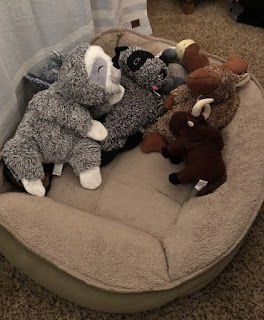