Singer Meredith Brooks to Alyssa Milano: Biden's Touchy-Feely Nature Is Disturbing, so Why Do You Support Him? 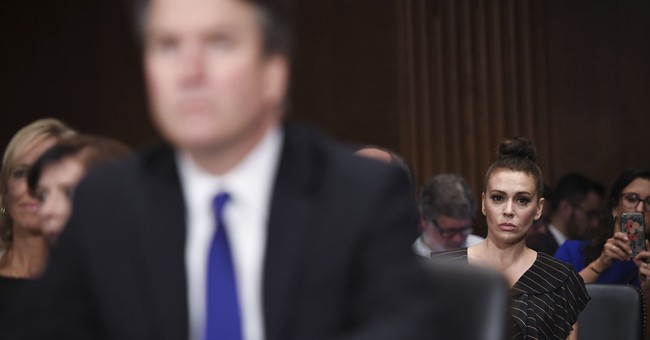 As I wrote earlier, there is no end to the hypocrisy on display by Democrats and the mainstream media regarding their treatment of the sexual misconduct and assault allegations against 2020 Democratic presidential candidate Joe Biden versus the ones against then-Supreme Court nominee Judge Brett Kavanuangh.

Actress and Joe Biden supporter Alyssa Milano is another Democratic hypocrite who has fallen in line with the rest on this issue, as my RedState colleague Brandon Morse reported earlier this month. Milano actually had the audacity to make a video at the time explaining why it was supposedly not inconsistent to declare Kavanaugh guilty without evidence and yet believe Joe Biden deserved the benefit of the doubt and due process:

There is something to the idea that people are going to weaponize #metoo for political gain. Just look at the replies here and look to see who those accounts are supporting in the primary. There always needs to be a thorough vetting of accusations.

Milano’s double standards caught the attention of singer Meredith Brooks, who addressed the actress directly in recent series of tweets:

Not good enough come on girl you have to start trusting your instincts. Everyone but you can see the history, pictures, videos??? Maybe he's not guilty but for you to endorse him without investigation Remember #BelieveWomen ?

When she didn’t get a response, Brooks kept after Milano:

Where are all the #MeToo supporters? https://t.co/fBqQrxhbwc

Finally, Brooks talked about how she was molested as a child and recognized the signs:

⁦⁦@Alyssa_Milano⁩ as a child victim of molestation this curdles my blood I’ve never spoken about this before but I have no choice now. You need to wake up ⁦@rosemcgowan⁩ ⁦⁦@robbystarbuck⁩ pic.twitter.com/jR3CnD09Ex

I don’t know if Brooks has ever said that publicly before, but it was a pretty powerful statement.

Brooks also explained to a Twitter user why she felt it was important to come forward with her story at this time:

But has Milano, who is so passionate about believing all women except when it interferes with her political goals, responded to Brooks? Nope. At least not on Twitter, anyway.

What an absolute fraud.