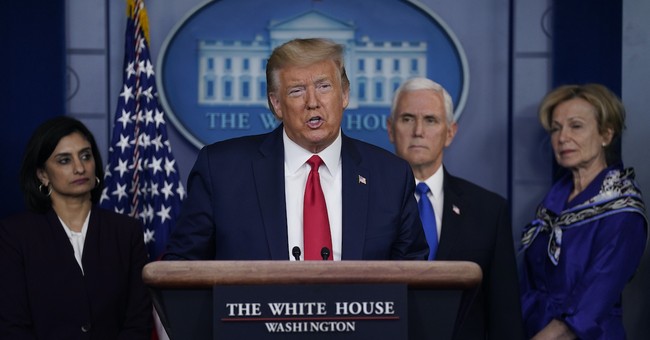 Another day, another media claim about President Trump’s handling of the Wuhan coronavirus crisis debunked.

Over the last few days, the mainstream media have rushed to “fact check” recent claims made by Trump that companies like 3M and Ford would be starting immediately on producing critical supplies and equipment our nation’s hospitals and doctors’ offices need in the fight against the virus.

The Associated Press was among the news outlets that pushed back:

DETROIT — President Donald Trump is falsely asserting how quickly automakers including GM, Ford and Tesla can manufacture ventilators to help fill an acute U.S. shortage of the medical equipment for coronavirus patients.

Ford and GM have yet to start production, and it would take them months, if not longer, to begin production, if it’s even possible.

A look at the claim:

TRUMP: “Ford, General Motors and Tesla are being given the go ahead to make ventilators and other metal products, FAST! @fema Go for it auto execs, lets see how good you are?” — tweet Sunday.

TRUMP, on addressing a shortage of ventilators: “General Motors, Ford, so many companies — I had three calls yesterday directly, without having to institute like: `You will do this’ — these companies are making them right now.” — briefing Saturday.

Here was the AP’s verdict:

THE FACTS: No automaker is anywhere close to making medical gear such as ventilators and remain months away — if not longer. Nor do the car companies need the president’s permission to move forward.

Forbes was one of many media outlets that uncritically echoed the AP’s reporting.

The problem with these “reports” is that they’re not true, as Ford confirmed today:

Face shields will be out the door starting this week:

Hi Dennis. We anticipate delivering the first 1,000 plastic face shields this week to hospitals in the Detroit area. We look to continue delivering more face shields and we’re working to increase production with GE Healthcare and 3M of their products. We’ll give updates as we go.

Respirators and ventilators will be in production at an accelerated rate just as soon as they can get approval:

Hi Robert. Once approved by the proper health agencies, we'll initially start at a pace equal to 1,000 disposable respirators per month but will quickly grow production as fast as possible by leveraging our network of 3D-printing partners.

Here's what we know so far: First 75k face shields will be delivered this week. Executives said "days to weeks" as far as respirators & CEO Jim Hackett said they'll be ramping up ventilator production between now and June.

Here’s more, from the AutoNews piece:

Ford also is partnering with GE Healthcare to expand production of a simplified version of GE’s ventilator design. Ford said the ventilators could be produced at a Ford manufacturing site in addition to a GE location.

Ford CEO Jim Hackett, speaking on “CBS This Morning,” said the automaker was targeting “hundreds of thousands” of ventilators and would ramp up production between now and June.

Elon Musk said last week that his crew was already on it regarding ventilators and other equipment:

Elon Musk has said about 1,200 ventilators are expected to be ready for distribution in the U.S. this week, an effort that could help medical experts treat severe cases of COVID-19.

The Tesla boss said on Saturday that he had discussed engineering “state of the art” ventilators with Medtronic, an Ireland-based healthcare firm that mainly serves the U.S. market. His company sent out tens of thousands of N95 respirator masks to states impacted by the novel coronavirus over the weekend, and Musk has promised more protective medical equipment is now imminent.

Last week, Musk confirmed he was “working on” production of ventilators that could help states that are suffering from a shortage of the equipment, used to help patients’ breathing.

Here’s a good rule of thumb when you read national media reports that give you worst-case-scenario projections on medical supplies and outcomes: Always question the source.