Whenever the issue of songwriting royalties arises, the most common reaction is “Wait a second – the federal government sets music royalty rates?”

“The bipartisan act addresses music licensing and royalty legislation, among other issues related to music rights…..

“The legislation includes a number of components, including payments to songwriters and artists for pre-1972 recordings, as well as increased compensation for works played on streaming services….” 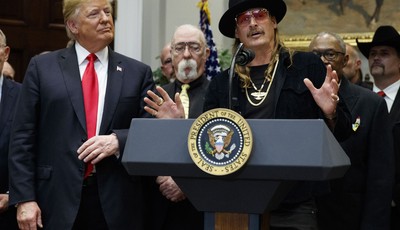 And it has always been thus.

As a retired musician – who wrote the stuff I performed – I always found this to be…unusual.

And I ain’t alone.  This from another conservative songwriter (though he may not be retired):

“To the dismay of composers like me, there is no true free market in the songwriting realm. However, for the past 77 years, consent decrees have created some semblance of a market pricing structure that has protected both songwriters and small businesses from monopolistic abuse.”

So sure, as a lone, unknown songwriter – I would have little leverage negotiating with Big Music.

But you know where the power differential between me and Big Music is even more acutely amplified?  In Washington, D.C.

With government setting how and how much musicians get compensated – it goes from a private party negotiation…to a contest to see who can best lobby and bribe government for crony favors.

So yes, this new law makes some real improvements.  But Big Music is already looking to…work around it – and secure extra-legal crony advantages.  Like – getting rid of the consent decrees.

Congress and the Department of Justice Must Stand Up to the Corporate Music Mafia:

“(T)he federal government put them under consent decrees in the 1940s: to ensure that the music collectives provide establishments with licenses to their entire collections at fair market rates, with a rate court handling all disagreements. These settlements have significantly helped in stopping their practice of charging rates that might make sense for their bottom lines but don’t make sense for anyone else, not even the songwriters they allege to protect.”

“Among the points that Sen. Lee subtly made to Makan Delrahim, the Assistant Attorney General of the DOJ’s Antitrust Division, is why in the world is the Justice Department seemingly focusing its review of 1,300 legacy antitrust judgments on the binding agreements that restrain the American Society of Composers, Authors, and Publishers (ASCAP) and Broadcast Music Inc. (BMI), which conservative songwriter Matt Fitzgibbons calls ‘two of the most anti-free market institutions in history?’

“Of course, in his typical statesman-like demeanor, the Utah senator didn’t quite phrase his inquiry this pointedly, but his message was clear: while it’s never a bad idea to review the regulatory state, honing in on the ASCAP and BMI judgments seems wholly unnecessary.”

And keeping the consent decrees in place – is the rarest of DC animals.  It is a Bipartisan:

“‘We ask that the Justice Department not move to terminate the ASCAP and BMI decrees without first having worked with Congress to establish an alternative framework to govern the marketplace for music works’ public performance rights in the absence of the decrees,’ four Senators wrote in a letter to Delrahim.

“They said such a ‘destabilization’ of the music marketplace would undermine efforts to pass the Music Modernization Act (S. 2334), which includes an array of copyright law updates impacting how songwriters, artists and other copyright owners are paid.

I stand with all of these Bipartisans.  And to the Trump Administration I proffer the immortal words of play producer Martin Gabel:

“Don’t just do something – stand there.”

Leave the music royalty consent decrees – exactly where and as they are.