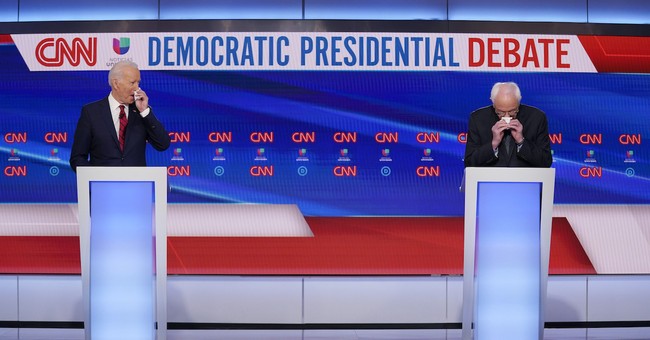 The two elderly Democratic presidential candidates battled it out in a debate on CNN on Sunday.

There was a lot of focus immediately on what the candidates would do in the face of the Wuhan coronavirus.

The very first question of the debate from Jake Tapper concerned it, “What would you say to the American people who are confronting this new reality?”

Biden’s words in response were okay, but it was his physical actions that prompted comment, sounding hoarse and then coughing into this hand.

Video of Biden coughing while answering a question about the coronavirus within minutes of the CNN debate starting. pic.twitter.com/hLmezArlGw

JOE BIDEN: First of all, my heart goes out to those [cough] who have already lost someone or those suffering from the virus. This is bigger than any one of us. This calls for a national rally for everybody move together. And I laid out in detail what I would do were I president today. Go to joebiden.Com. I laid it out in significant detail [cough].

Biden also claimed that since the recommendations had come down he hasn’t been touching his face. But he touched his face just before saying that and touched his face multiple times in the debate.

Biden about coronavirus: I make sure I don’t touch my face.. seconds after touching his face when saying “knock on wood”

So, Biden says he is no longer touching his face, right after he…touches his face? pic.twitter.com/Xcjlwd4FQi

As we reported last night Biden also had issues with memory and confusion, mixing up the H1N1, calling it N1H1 as well as confusing the swine flu and the Wuhan coronavirus.

Sanders also was coughing and sniffling too.