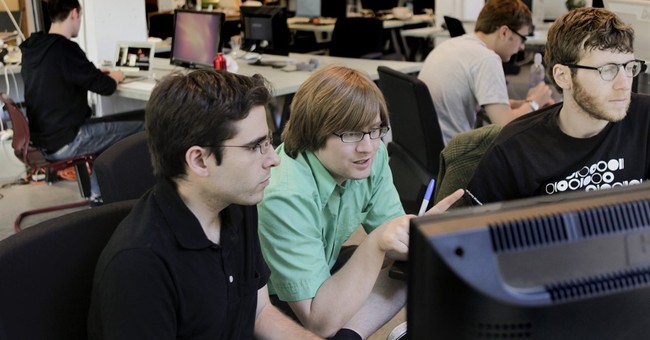 FILE – In this July 29, 2011, file photo, from left, Aaron Parecki, Patrick Arlt, and Kyle Drake work in the Portland Incubator Experiment offices, in the Pearl District in Portland. The Portland Incubator Experiment, more commonly known as PIE, is ad firm Wieden Kennedy’s effort to nurture startups. It’s not always easy to transition from a corporate environment to running your own shop. But you can take certain steps before quitting your current job to make sure you’re ready for the unique pressures of entrepreneurship. (Ross William Hamilton/The Oregonian via AP, File)

There is no shortage of articles floating around these days about LIFE AFTER CORONAVIRUS. Although we’ve been in lockdowns for the better part of two months (with some states set to extend deadlines) we’ve already seen a massive societal shift that is manifesting itself in a myriad of ways. From tv commercials to online church to our new love of Zoom — the COVID life is the new normal for now. We have no idea how many of these “shifts” will be permanent and what will fall away once we get back to a world without a pandemic crisis. Will churchgoers ever feel comfortable going back to packed services, hugging each other, and shaking hands with strangers every week? Will people return to their brick and mortar businesses or will America become even more dependent on at-home workers? Will more people choose to homeschool? Will fewer people choose to homeschool?

There are all kinds of questions worth asking. Very serious health concerns aside, it will be fascinating to watch America resettle all the pieces and see where they land. The data, charts, and graphs that will come out of all will be a nerd’s ultimate fantasy realized.

I kind of liked pre-COVID America and I hope most things eventually settle back into our “old” normal. But there is one thing that I sincerely hope COVID has destroyed forever…the open office plan.

Sometime in the last decade or so someone decided that cubicles were too impersonal. I actually think that “someone” was Hollywood. Like most of our silliest ideas, open office plans were borne from the minds of desperate, dreaming artists who at one point or another had to take a boring-ass desk job to make ends meet while they were writing the next Citizen Kane. While they were cooped up in a sterile office building, choking on neckties and stale coffee, staring at the soul-crushing walls of their cubicles as they tried to look busy they were also dreaming. They were wishing for a life filled with art, creativity, fame…connection. That’s what they really wanted and really it’s what every artist of every kind is working toward…connection of some sort. Cubicles don’t make for great connections but they do make for hilarious scripts. Office Space is still a masterpiece. It also set the tone for a slew of films of all genres lampooning or thrashing office culture as soul-crushing, defeating black hole of dreams. No one who enters ever comes out again. Because Americans take a lot of our cues about the world around us from Hollywood, we began thinking office culture was indeed the problem. Of course, it wasn’t. The problem was a bunch of writers mistaking their mentality for that of everyone else around them – for assuming that America’s office workers were no more than a bunch of losers who gave up on their dreams too soon.

Regardless, America got the idea that cubicles were a scourge and then the millennials of the Google era decided that they could make an office culture that was far better than that of their parents and grandparents. So they got rid of cubicles and ushered in the era of the open office.

In case you’ve never had the pleasure of actually working in an open office plan, let me explain it. They take out all the walls -except the bosses’ walls. The bosses are the only people who get walls. Bosses and bathrooms. Everyone else gets the luxury of CONNECTION. Then they take out all the cubicles and replace them with connected desks like the kind you had in elementary school. Sometimes those desks have a small corkboard perched in front of the worker so they can have space for their post-its and whatnot but never do they block your view of the person sitting on the other side looking right at you. Any little space to hide or find a private corner is occupied by beanbag chairs, large couches, plants…anything that prevents someone from finding a little privacy. Often, even the kitchens are open. It isn’t uncommon to see a kitchen that is just a part of the common workspace. So while you’re sitting at your desk listening to your neighbor’s tummy rumble you can also listen to Kathy from accounting slurping down her Lean Cuisine shrimp linguine. The idea was to remove those sterile walls of office culture and make it more like the arts culture, where people work closely and organically.

The result was a horror-show of confusion, resentment, and lowered productivity. You know that saying, “Good fences make good neighbors”? Well, it turns out that is very true. I temped in an open office space once and what I saw there was worse than the Hollywood-ized office culture of movies like Office Space. Far from engendering closeness, it acted to drive people further from each other.

Lack of any walls meant lack of any privacy. We may think because we’re not the type to watch porn at work (I honestly can’t believe people actually do that. Grow up, America!) that we don’t need that much privacy but think about all the things you do in a day very quickly when no one is watching. You eat that ill-advised onion ring tower for lunch and then belch up the aroma later in a smelly but satisfying burp. You scratch your butt or adjust your bra. You pick your nose. You think about someone who makes you smile…or makes you frown.

Not only that, but you use your walls to whisper secrets to co-worker/friends. You have a quick chat about the latest Netflix show without disturbing 40 other people. When you get stuck on a work problem you fold a paper airplane, scroll through Reddit, or simply stare off into space for a few minutes for some stress relief. When you get up from your desk, 40 people don’t see you and judge you, wondering if you’re going to the bathroom or for a secret smoke break.

In fact, the only way to get any type of minimal privacy was to get up and go to the bathroom (so the bathrooms were always full) or to put on headphones. 100% of the people in that space had on headphones. It was the last shred of privacy they could find — the kind that comes when you can’t hear anything else. So, instead of connecting with each other, these people were willfully cutting each other off. They didn’t talk because all conversation is heard by everyone else. They didn’t laugh over a shared work experience or something funny they overheard because there was nothing to hear. Everyone had earbuds in. They didn’t have any comradery. It was clear that we all resented having to be so close to each other. It felt like being treated like children…like children at their elementary school desk.

Which, ironically is what most of Hollywood is made up of. Adults who experienced some trauma in their lives that kept them in the mental headspace of a child. It’s why they’re so good at imagining things and so terrible at real life.

The whole thing was a mess. It squelched creative thinking because everyone was too occupied with restraining themselves in ways that aren’t natural. They never developed the rapport they needed to strengthen work relationships. They never got to know each other and no one could really personalize their space so it never felt welcoming. It was and is abject disaster.

Now with post-COVID life fast approaching, the “experts” are telling us that buildings may need to look at better designs that encourage increased space between employees and limit close-space interactions. Better designs like…cubicles?

If what comes out of this pandemic is a ban on the open office concept than I’d say that’s one hell of a silver lining.

Kill the open office concept. Set it on fire and the salt the ground.