You Know What We Need Right Now? Locusts. 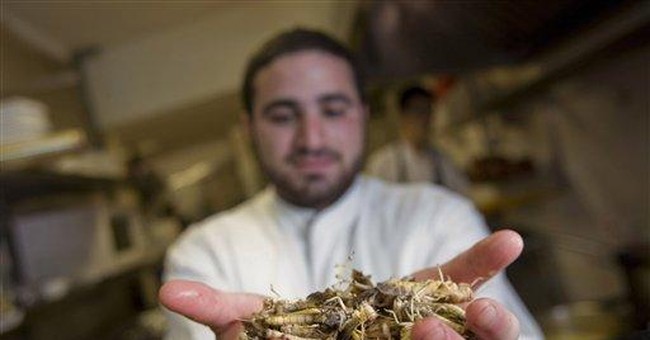 In this photo taken on July 22, 2010, an Israeli cook displays locusts during a kosher meal in a restaurant in Jerusalem. The men behind a unique six-hour eating marathon in Jerusalem want diners to know two things about locusts: First, they taste great stir-fried, and second, they’re kosher. (AP Photo/Olivier Fitoussi)

An earthquake in Utah. A worldwide pandemic (one might even call it a plague). Drought in Australia. Surely, you had to know that this was coming.

Many of you are religious, and most of you who are religious are at least partly aware of events described in the Bible. You must have figured, like I did, that locusts were the next one up. And it’s apparently going to be pretty bad.

Climate change created unprecedented conditions for the locusts to breed in the usually barren desert of the Arabian gulf, according to experts, and the insects were then able to spread through Yemen, where civil war has devastated the ability to control locust populations.

It was Cyclone Mekunu, which struck in 2018, that allowed several generations of desert locusts the moist sand and vegetation to thrive in the desert between Saudi Arabia, Yemen and Oman known as the Empty Quarter, breeding and forming into crop-devouring swarms, said Keith Cressman, locust forecasting expert for the UN’s Food and Agriculture Organization (FAO).

“That’s fine, that’s quite good in itself, but just about when those conditions are drying out and the breeding is coming to an end, a second cyclone came to the area,” he said.

“That allowed the conditions to continue to be favourable and another generation of breeding, so instead of increasing 400-fold, they increased 8,000-fold.

“Usually a cyclone brings favourable conditions for about six months and then the habitat dries out, and so it’s not favourable for reproduction and they die and migrate.”

So, yeah. There is an unprecedented swarm of locusts about to get stirred up in northern Africa? That’s not troublesome at all or anything like. I’m sure things are going to be just fine. Just in case, though, if you are the praying type, maybe say an extra prayer for the people in northern Africa, because a plague of locusts is not a good thing for any society. It will decimate food supplies and cause untold havoc.

And, all of the (probably) religious coincidence aside, this could not come at a worse time in the world. The novel coronavirus is wreaking untold havoc across the globe and we’re never going to be sure of the true damage because nations like Iran and China will never tell us. They will never acknowledge the failures of their own governments in stopping the Wuhan virus. They will never let the world know they are weakened.

And because of China’s negligence – and, yes, it is nothing short of negligence – millions the world over will end up infected and thousands will die because of it. A swarm of locusts could be manageable, though barely, in places like Yemen and Somali. But, because the world is also dealing with the effects of the Wuhan virus, if there is a major outbreak in those countries, starvation won’t be the only issue. What’s worse is that COVID-19 would slow down aid coming into the country, because every other nation is also fighting it.

The deaths across the globe from the Wuhan virus, both direct and indirect (as in the case of this locust swarm) should be hung around China’s neck. The Chinese communist party has to be held accountable for this. Of course, it gets much harder for that blame to be properly assigned, when our own American media is dead set on pushing out China’s propaganda in an effort to “resist” Donald Trump.