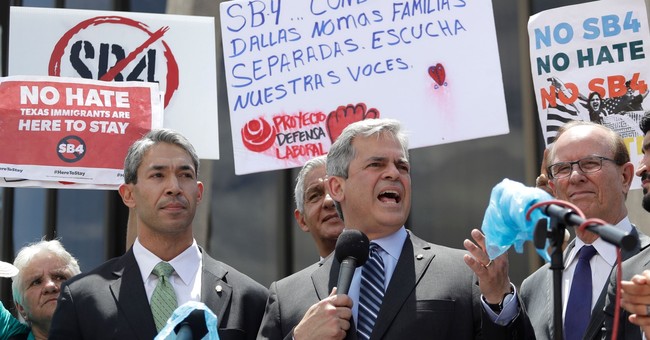 FILE – In this Monday, June 26, 2017 file photo, Austin, Texas Mayor Steve Adler, center, stands with San Antonio Mayor Ron Nirenberg, left, as he speaks to protesters at a rally in San Antonio outside of the Federal Courthouse to oppose a new Texas “sanctuary cities” bill that aligns with the president’s tougher stance on illegal immigration. The census, undertaken every 10 years, uses the number of total residents _ not citizens _ to allot seats in the U.S. House of Representatives to each state. “If we don’t count all the people who live in our city _ all the residents we have _ it could mean that our community doesn’t get our fair share of moneys or aid,” says Adler. (AP Photo/Eric Gay)

Just when you thought the Coronavirus snitching outbreak couldn’t get any worse, the societal virus continues to spread. Austin Mayor Steve Adler decided to channel his inner Kim Jong Un on Monday when he announced an extension of the city’s shelter-in-place orders.

But it was the decision to urge Austinites to rat out their neighbors that raised eyebrows. As you might imagine, the Karens of the city took Adler’s exhortation to heart.

The mayor declared that the updated version of the order, which mandated the closure of non-essential businesses and the implementation of social distancing practices, would now require residents to wear face masks when they go out in public. The new order extends the restrictions to May 8.

According to the Mayor, the city will impose penalties against those caught in public without wearing the face coverings. These punishments could include fines of up to $1,000 and even jail time. Travis County Judge Sarah Eckhart, who was with the Mayor during the announcement, said: “There certainly will be enforcement if we do not see a community-wide embrace of social distancing and appropriate masking.” She added, “If we see really egregious violations that are threatening community health, we will certainly enforce.”

Adler then stated that they are hoping for Austinites to “self-police,” and affirmed that “these kinds of orders carry with them criminal penalties and the force of law.” At this point, he urged residents to report those who are not complying with the order. “If you see violations in the community, construction sites, restaurants, it’d be good to call 311 and let the city and the county know that that’s happening.”

Austin 311 is a non-emergency contact line for the city. It is normally used to report fallen trees, malfunctioning traffic lights, and other such issues. But residents don’t only have to call the line to report activity — they can even use the Austin 311 app. Just as we have seen in Kentucky, many people are using the app to rat out their neighbors.

Here are some of the reports people have made on the app:

“There is a large group of 10 or more people in my neighbor’s front yard.”

“Ongoing basketball games, I have been noticing almost every afternoon people are violating the social distancing guidelines and playing basketball in large groups around 5pm at [a local park]”

“Two workers for DPR sitting together.”

“There is a group of people … that are being disruptive and not adhering to social distancing or stay at home orders.”

“People are not keeping social distancing of 6ft and are not wearing face coverings at Domain Central Park.”

These are only a small sample of the reports being sent by Austin residents through the app.

This isn’t to say that social distancing isn’t important — it has helped to curb the spread of COVID-19. However, the cities and states encouraging this behavior could easily create a culture of distrust. Imagine being in a neighborhood with people who are willing to potentially have you arrested because you forgot to wear a face mask outdoors. It doesn’t exactly make for the type of environment anyone would want to live in, does it?

While this isn’t exactly creating an American version of North Korea, it does have similarities to the culture that is fostered by totalitarian governments. The notion that people could be subject to fines and arrest for doing work on a roof is disturbing. But what is even more problematic is the willingness of many to comply with the Mayor’s request.

The outbreak has caused several societal changes in America. But this particular paradigm is one that we should not embrace. As President Trump said, we cannot let the cure become worse than the disease itself.