France leading the way in helping Iraqi Christians. Will America step up?

In a previous post, I wrote about how France was taking the lead on responding to the humanitarian crisis that is the plight of Christians in Iraq.* Recently, France24, the country’s official international news station (like the BBC World Service, RT, or Deutsche Welle), posted a segment (in English) on the country’s efforts to settle the Iraqi Christians to whom it has granted asylum. You can watch the full segment there, but here’s the most important part:

It is a national disgrace that we, as world’s beacon of freedom, have not been the ones leading the way on this issue. As Ed West over Britain’s The Spectator notes in a piece condemning the silence in both America and his own country:

As I argued in my little book on the subject, Britain and America have done nothing to help the region’s religious minorities, and indeed have worsened their plight. Britain’s betrayal of Christians in Iraq – whose grandfathers fought alongside us in two wars – is one of the most shameful episodes of our recent history, perhaps the greatest since the betrayal of Poland in 1944; the difference being that there was arguably nothing we could do to help Poland, while there’s quite a fair bit we (by which I mean Britain and the US) could do in Iraq. The Christian stronghold in that country is centred on the Nineveh Plains, just outside Mosul, where villagers are currently awaiting the arrival of the Sunni extremists – the same group, remember, who carried out the appalling October 31, 2010 Baghdad church massacre.

Not far away is the territory of the Kurds, our allies, who now look likely to achieve independence from Iraq, and with considerably more territory than they previously had. With the help of the Kurds we could protect Iraq’s minorities concentrated in that region, a region of breathtaking religious and cultural diversity – it’s just that no one in the American or British governments cares.

Even in the wake of the beheadings of two American journalists, the Obama administration has taken no major actions against ISIS, as my colleague streiff notes. Instead, we see him dragging his feet. The State Department is even refusing to say that we are at war with ISIS. Meanwhile, the President himself is sending conflicting signals about just what the US should do with ISIS. As Jonathan Karl at ABC News notes:

At first, the president offered what seemed to be an unambiguous goal.  “The bottom line is this:  Our objective is clear and that is to degrade and destroy ISIL so it is no longer a threat,” he said.

“Our objective is to make sure they aren’t an ongoing threat to the region,” he said.

Then, in response to another question, he seemed to backtrack even further:  “We know that if we are joined by the international community, we can continue to shrink ISIL’s sphere of influence, its effectiveness, its military capability to the point where it is a manageable problem.”

Those two ideas cannot co-exist in a strategy. You cannot destroy something by making it “a manageable problem”. What’s even worse is that the President appears to think that the latter is the best America can do, and it’s unfortunate that such thoughts tend to become reality in the realm of politics and international affairs.

As for Iraq’s Christians, America’s policies concerning them have been similarly lacking. To their credit, Senators Rob Portman (R-OH) and Debbie Stabenow (D-MI) have managed to get a resolution to pass the Senate with substantial bipartisan support “[e]xpressing the sense of the Senate on the current situation in Iraq and the urgent need to protect religious minorities from persecution from the Sunni Islamist insurgent and terrorist group the Islamic State, formerly known as the Islamic State of Iraq and the Levant (ISIL), as it expands its control over areas in northwestern Iraq.” A resolution is not policy, though. We need action.

Meanwhile, we see an outbreak of sanity in, of all places, California. State Senator Joel Anderson, a Republican from the San Diego area, has been leading the charge. He authored SJR-17 and got it to pass the State Assembly. As a press release from his office explains it:

SJR 17 would urge President Obama to expedite visa processing for Iraq’s minority groups and lift quotas on Iraqi Christian refugees to streamline the process of accepting them into the United States.

SJR 17 also urges Congress to pass House Resolution 663 and the State Department to work with the Chaldean community in the US, the Kurdistan Regional Government, the Iraqi central government, and other neighboring countries to secure safe havens for Iraqi’s fleeing persecution.

“Today we took another step in addressing this urgent need to protect religious minorities, including Iraqi Christians, from persecution by the Islamist State in Iraq and Syria,” said Senator Anderson. “I am proud California is now on record urging the President to recognize this humanitarian crisis.  We cannot allow the Islamic State of Iraq and Syria to continue this genocide.”

From here, it goes onto President Obama and the United States Congress. The United States has a history of taking in refugees, as we have seen with the exiles from Cuba and the Vietnamese boat people. I do not think it is an overstatement to say that the situation faced by Iraq’s Christians is even more dire than that of the refugees from either of those countries. The United States would do well to turn the suggestions from State Sen. Anderson’s resolution into official policy.

Still, we cannot stop at merely taking in refugees. Our policies need to be more comprehensive. Over at The Week, Michael Brendan Dougherty makes some more good suggestions:

The U.S. has sent arms to Iraq to aid its fight against extremist groups. And the U.S. still sends over $1 billion in foreign aid. As such, America could premise some of this aid, or even an increase, on the government doing a better or more vigorous job of protecting religious minorities in Iraq. Of course, this may not be the most important or effective means of assisting persecuted Christians. And in fact, Iraq has rejected some extra forms of foreign assistance, fearing it makes the new regime look like a puppet.

So the U.S. should look for ways to provide direct monetary and diplomatic assistance to neighboring states in the region where persecuted Iraqis are seeking refuge, perhaps even going so far as to directly assist in the emerging centers of authority in Kurdistan, where some refugees have sought protection from ISIS, and which continues to prove itself capable of maintaining some order and security.

Finally, it is incumbent upon us to develop a comprehensive military strategy to fight the Islamic State. We cannot settle for piecemeal actions. We need to understand that ISIS is at war with us, and whether we like it or not, we will have to confront this belligerent and aggressive group on the battlefield. In fact, as another of my colleagues Bill S says, “ISIS is a clear and present danger that must be completely eradicated.” (Emphasis mine). This quote from Senator Portman sums it up well:

“It is deeply unsettling that the President of the United States does not have a strategy to address a clear threat to the United States and its allies and interests in the Middle East, especially one we’ve known about for a long time. The President’s ISIS strategy is long overdue. As we wait for the President to develop a strategy to combat ISIS, the danger to our national security, our allies, and innocent people across the region will only continue to get worse. As we’ve seen in Syria, Iraq, Ukraine, and elsewhere, the absence of U.S. leadership and a comprehensive strategy to address global challenges carries significant consequences for U.S. interests and global stability.”

We cannot stand by and watch this genocide of Iraq’s Christians. America must make protecting them one of the highest priorities of our foreign policy in the Middle East, and in particular, I believe we must move forward on granting refugee status to those that see it and bring them here, at least until ISIS has been defeated.

*=The featured image for this post, in case you are wondering, depicts French Foreign Minister (in the center) standing with some Iraqi Christians he was greeting as they debarked a plane. 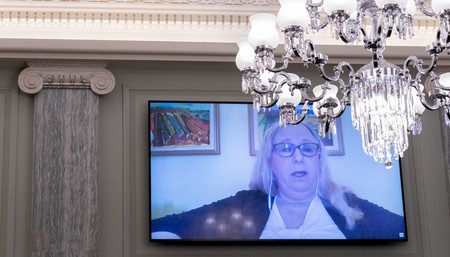 Meet the Press Host Made a Comment About a Key Biden Promise...And Liberals Had a Meltdown
Townhall
Report: Lawyers convince Trump not to pardon himself, his kids, or anyone involved in Capitol rally
HotAir
Richard Grenell straightens out what's 'gasoline to a fire' and a danger to democracy
Twitchy
Biden Cannot Legally Get Us Back Into the Paris Climate Accords; Here's Why
PJ Media