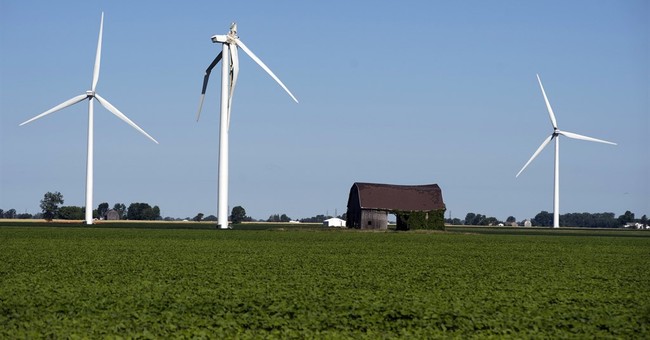 A broken wind turbine, center, in Nextera Energy’s Tuscola Bay Wind Farm sits idle in a farm field near the intersection of North Gera and Hack Roads in Blumfield Township in the northeast corner of Saginaw County on Tuesday, June 27, 2017. According to Nextera, the turbine broke Monday, June 26 and they are going to repair the damage. (Jeff Schrier/The Saginaw News via AP)

Across the world, governments dealing with the COVID-19 pandemic are putting aside their concerns about the purported “existential threat” of climate change to focus on the urgent and actual threat the coronavirus poses to human health and the economy.

Everywhere, world leaders supposedly committed to fighting climate change as the gravest threat facing human civilization and the environment, are jettisoning climate policies in the hopes of both reducing the damage to their economies from the COVID-19 shutdown and speeding the recovery once the pandemic subsides.

In the United States, led by Speaker of the House, Nancy Pelosi (D-CA), Democrats tried to take advantage of the coronavirus crisis to pack the third coronavirus relief bill with a grab-bag of special interest mandates and subsidies, including pushing restrictions on carbon emissions from airlines and extending subsidies for wind and solar power beyond their current expiration dates.

President Trump and the Republican leadership in the Senate would not be extorted, and in the end, Democrats showed the true depth of their fear of climate change by removing all climate and green energy related proposals from the bill. They fought harder for extra funding for arts and humanities programs, performance halls, and museums than they did for climate policies. Millions of dollars of pork for concerts and plays mostly attended by their relatively wealthy donors was packed into the bill with absolutely nothing for climate.

Across the pond, the European Union is wavering on its climate policies in the wake of the COVID-19 pandemic.

The Polish government has said the coronavirus will make it even more difficult to achieve any of the European Union’s (EU) current and proposed climate goals.

“As a consequence of this crisis our economies will be weaker, companies will not have enough funds to invest, completion of some important energy projects may be delayed or even suspended,” Poland’s climate ministry told Reuters. “[A]chievement of our climate goals will be even more difficult because of them.”

Poland is far from alone. In a speech in the State Parliament in Munich on March 19, Marcus Soder, minister president of the German state of Bavaria, asked the federal government to suspend Germany’s electricity tax and EEG levy, a 6.88 ¢/kWh surcharge paid by electricity consumers. He noted German consumers and industries expect to pay €23.9 billion in green energy levies alone in 2020, amounting to approximately 280 euros per average household.

“Europe should forget about the Green Deal now and focus on the coronavirus instead,” Babi told reporters on March 16.

Babis’s call for scrapping deeper emission cuts was echoed by Jan Zahradil, vice chair of the European Parliament’s Committee on International Trade, who said in a tweet, the crisis means climate plans should be reconsidered. “No post-virus economy in Europe will be able to handle it, it’s too expensive,” Zahradil tweeted.

Even UN Secretary-General António Guterres, just months after declaring the climate crisis an emergency at UN summits in September 2019 and December 2019, now says the COVID-19 pandemic is the world’s top priority. In an unprecedented mid-March online press conference Guterres said action on climate change would have to be delayed because all the UN’s resources and programs would be directed at tackling the pandemic.

If the Green New Deal and other policies and programs proposed to fight climate change would really create good paying jobs and generate economic growth, now would be the perfect time for a fresh start with a new green economy! However, the Green New Deal would do the opposite.

Instead, governments around the globe are ignoring and abandoning climate change policies in favor of stimulus measures to combat the economic devastation wreaked by the virus.

In good economic times, it is easy for politicians to push green fairy tales. But, as the current coronavirus crisis demonstrates, support for these green dreams plummet when reality is a nightmare rife with economic turbulence and social instability courtesy of a virus that emanated from Communist China, one of the most repressive and pollution-heavy civilizations the world has ever witnessed.

H. Sterling Burnett, Ph.D. ([email protected]) is a senior fellow on energy and the environment at The Heartland Institute, a nonpartisan, nonprofit research center headquartered in Arlington Heights, Illinois.