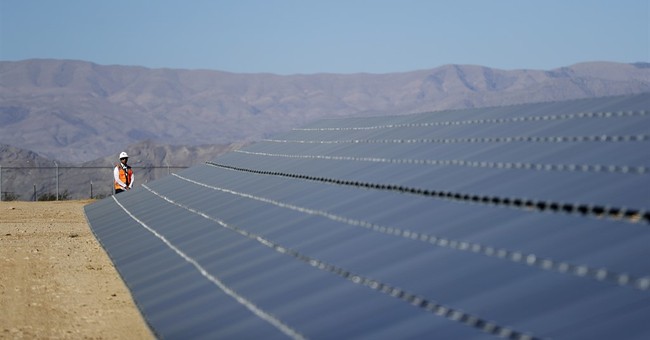 A man stands at the end of a solar panel array as Secretary of the Interior Sally Jewell tours a solar project site, Thursday, Sept. 15, 2016, on the Moapa River Indian Reservation about 40 miles northeast of Las Vegas. Jewell was making her third stop on a tour of renewable energy sites around the country. (AP Photo/John Locher)

In an amazing display of political tone-deafness, in the midst of the COVID 19 pandemic, Wired magazine has devoted an entire issue to “How We Will Solve the Climate Crisis.” The issue comes out even as governments around the world are scrapping climate commitments, cutting subsidies to green energy, and focusing on fighting the coronavirus, first and foremost.

Even UN Secretary-General António Guterres recognizes the purported “existential” threat posed by climate change has been trumped by the very real destruction the coronavirus is wreaking upon peoples’ lives and livelihoods. In a  mid-March online press conference, Guterres admitted action on climate change would have to be delayed as all the UN’s resources and programs would be directed at tackling the pandemic.

Multiple independent analyses have concluded a carbon dioxide tax would cost jobs and reduce economic growth. For instance, a 2014 Heritage Foundation report found that a $37 per ton carbon tax would lead to a loss of more than $2.5 trillion in aggregate gross domestic product by 2030 or more than $21,000 in income loss per family. In addition, a carbon tax would destroy more than 500,000 jobs in manufacturing and more than one million total jobs by 2030. Moreover, analysis of the carbon dioxide tax Wired discusses indicates it would raise gasoline prices 44 cents per gallon and would cause natural gas and coal prices to skyrocket by 62 percent and 330 percent, respectively.

Of course, the article fails to mention that the burden of a carbon dioxide tax would fall most heavily on the poor, minorities, and those on fixed incomes who spend a greater percentage of their incomes on energy and energy-intensive goods and services than relatively wealthy households.

Nor would it be revenue-neutral for government in any real sense because portions of the tax would have to be diverted to government bureaucracies to measure and monitor carbon dioxide emissions, collect the appropriate tax, police against fraud, and cut the checks.

Wired says the carbon dioxide tax would reduce U.S. emissions by an estimated 63 percent by 2050—still far from carbon neutral. Yet even Wired acknowledges, this won’t truly dent carbon dioxide levels unless other countries impose similar carbon dioxide taxes within their borders. As former Secretary of State John Kerry noted in a December 2015 speech to the UN Framework Convention on Climate Change, “If we [the United States] somehow eliminated all of our domestic greenhouse-gas emissions, guess what — that still wouldn’t be enough to offset the carbon pollution coming from the rest of the world.”

Racking up three strikes, and thus it should be out, past experience shows the carbon dioxide tax is not a political winner, either. Over the past year, protests and riots erupted in several countries as the public vocally and sometimes violently rejected taxes imposed by their governments on energy use to fight climate change.

In other countries, the public’s response was less volatile but no less effective. In 2014, Australia became the first Western nation to repeal its carbon dioxide tax after the government that imposed the deeply unpopular $25 per ton tax was replaced. Soon after, the new government repealed the tax.

And in the United States, in the 2018 mid-term elections, Republicans who had supported carbon dioxide taxes took a drubbing in the election with more than half of the GOP members of the Climate Solutions Caucus losing their seats, including caucus co-founder, Carlos Curbelo (R-FL).

Even in good economic times, a carbon dioxide tax is a loser. In the current COVID-19 crisis, it would be a disaster, perpetuating our already beleaguered economy, making it one of the worst ideas possible.

H. Sterling Burnett, Ph.D. ([email protected]) is a senior fellow on energy and the environment at The Heartland Institute, a nonpartisan, nonprofit research center headquartered in Arlington Heights, Illinois