Good for the Southern Baptist Convention 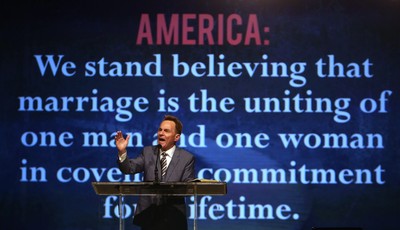 It is refreshing to see virtually all the past still-living leaders of the Southern Baptist Convention join their current leader in taking a principled stand against gay marriage.

Regardless of what the Supreme Court decides, churches need to speak forcefully on Biblical teachings and this is one.

I hope preachers who have been wavering and refusing to speak up might now be emboldened by the largest Protestant denomination in America speaking with moral clarity.

More of this please.

As Southern Baptist Christians, we are committed to Biblical faith and ethics. As a result, this body of Believers stands on the authority of Scripture and God’s Truth as central to our lives.

What the Bible says about marriage is clear, definitive and unchanging. We affirm biblical, traditional, natural marriage as the uniting of one man and one woman in covenant commitment for a lifetime. The Scriptures’ teaching on marriage is not negotiable. We stake our lives upon the Word of God and the testimony of Jesus.

Consequently, we will not accept, nor adhere to, any legal redefinition of marriage issued by any political or judicial body including the United States Supreme Court. We will not recognize same-sex “marriages”, our churches will not host same-sex ceremonies, and we will not perform such ceremonies.

While we affirm our love for all people, including those struggling with same-sex attraction, we cannot and will not affirm the moral acceptability of homosexual behavior or any behavior that deviates from God’s design for marriage. We also believe religious freedom is at stake within this critical issue – that our first duty is to love and obey God, not man.

Therefore, we strongly encourage all Southern Baptist pastors, leaders, educators, and churches to openly reject any mandated legal definition of marriage and to use their influence to affirm God’s design for life and relationships. As the nation’s largest non-Catholic denomination with over 16 million members, we stake our very lives and future on the Truth of God’s Word.

We also join together to support those who stand for natural marriage in the corporate world, the marketplace, education, entertainment, media and elsewhere with our prayers and influence, and resources.

Why the Media Is About to Run Away From the Texas Synagogue Hostage Story
Townhall
Who. They. REALLY. Are --> Arlington Public Schools Comms. Dir. ACCIDENTALLY sends email crapping on The Daily Caller TO writer at The Daily Caller
Twitchy
Fed up Manager Shows How It’s Done After Gillibrand Flouts NY’s Mask Rules in His Restaurant
Redstate
The Morning Briefing: Democrats Remain Disturbingly Fond of Islamic Terrorists
PJ Media