The Reason for the Delay in COVID Tests? Contamination at the CDC Lab 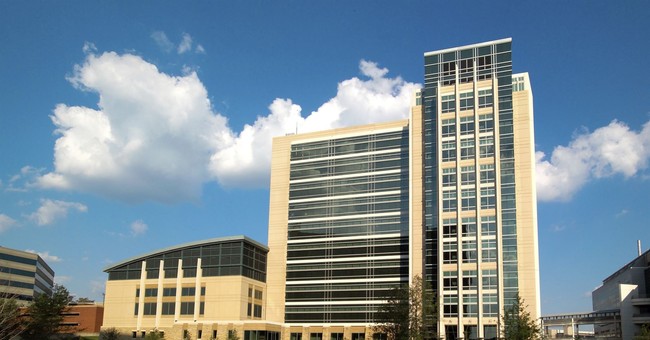 This Sep. 9, 2005, photo provided by the Center for Disease Control and Prevention shows the then newly constructed 11-story Emerging Infectious Diseases Laboratory located at the CDC’s Roybal campus in Atlanta. Thirteen years after building the state-of-the-art lab for the world’s most dangerous germs, the nation’s top public health agency is asking for more than $400 million to build a new one. CDC is asking Congress for the money. Its officials say the current lab building in Atlanta is quickly wearing down, and cannot be upgraded without shutting down the facility for years. (Center for Disease Control and Prevention via AP)

Rabid anti-Trumper Joe Scarborough noticed the U.S. ranked 38th on COVID-19 tests per person and couldn’t pass up the opportunity to bash the President over it. He wrote, “The most economically, scientifically, and technologically advanced country on the planet is ranked 38th in tests per person. Donald Trump had to work hard to screw up such a massive advantage. His trust in China lost months, as did his belief COVID-19 would magically go away.”

In fact, many of us had wondered why test kits seemed to be a scarce commodity early on. Scarborough is correct, there were problems during the month of February with the rollout of the tests. But he is wrong to blame the delay on Trump. He may want to direct his anger at the Centers for Disease Control and Prevention (CDC).

The most economically, scientifically, and technologically advanced country on the planet is ranked 38th in tests per person. Donald Trump had to work hard to screw up such a massive advantage. His trust in China lost months, as did his belief COVID-19 would magically go away. https://t.co/2jkbagnu3N

The issues with the CDC lost us about a month. On January 12, China published the genetic sequence of the coronavirus and the CDC went to work to create a test.

The Washington Post published a detailed article over the weekend which explained what went wrong (the full article can be viewed here.)

Those familiar with the events said the design efforts were led by Stephen Lindstrom, an accomplished respiratory virus specialist who was a co-inventor of seven earlier CDC tests for strains of the flu…

The test kits featured two components that focused on separate regions of the virus’s genome, a standard approach. However, the CDC also outfitted the kits with a third component, a pan-coronavirus segment. That addition sought to identify a wider family of coronaviruses, of which covid-19 is the most recent strain to be observed in humans. Tests that were being developed abroad under sponsorship from the World Health Organization did not include this extra feature.

It was the addition of the third component, which was unnecessary anyway, that was responsible for the problems. The CDC decided to manufacture the tests in-house. Scientists with knowledge of the matter told The Post that, “the CDC facilities that assembled the kits violated sound manufacturing practices, resulting in contamination” of the reagent used in the third (unnecessary) component of the test. The contaminated reagent caused the third component to show a false-positive result even though the labs were using highly purified water rather than patient samples. The Post explains:

In the fourth week of January, the CDC shipped out the kits to more than two dozen public health labs scattered across the country, from Albany, N.Y., to Richmond, Calif…

The labs were instructed by the CDC to demonstrate that the test would work before analyzing samples from patients.

But when those facilities began using the kits to analyze a negative control sample — highly purified water supplied by each lab and free of any genetic material — the tests wrongly signaled the presence of the coronavirus.

The first two components of the tests could have actually been used to begin testing on people, but as per the CDC, the test had “to be used as designed.”

The first public hint of trouble with the test came during a Feb. 12 press briefing in which the CDC’s Nancy Messonnier mentioned unspecified “issues” bedeviling the public health labs. At the time, most American clinics and hospitals remained unable to test for the coronavirus…

“We think that the issue at the states can be explained by one reagent that isn’t performing as it should consistently, and that’s why we are remanufacturing that reagent,” she said.

At the public health labs, officials struggled to figure out what was wrong. Some labs determined that the test would work without the third component. But under the CDC’s emergency instructions, health officials had to use the test as it had been designed.

Individuals “familiar with these events” told The Post that the CDC had not provided the FDA with a “satisfactory explanation” for the delay and the virus was spreading. Calls for the test were skyrocketing. On February 23, Timothy Stenzel, a top FDA official for regulating diagnostic devices used for medical treatment, traveled to Atlanta to meet with the CDC’s scientists to find out what was going on.

Stenzel learned that the problems were “caused by the CDC’s manufacturing, not the design.”

The FDA on Feb. 26 informed the CDC by email that the labs could begin testing samples while skipping the third component.

Iowa-based Integrated DNA Technologies began to manufacture the test kits and all has gone smoothly.

In the news briefing, Messonnier also said that the CDC had “established that the third component . . . was the cause of the inconclusive results” and “can be excluded from testing without affecting accuracy,” she said.

Messonnier said nothing about the FDA’s recommendation that CDC stop making the test kits in-house.

“We are working as quickly as we can to get CDC test kits to state and local public health authorities,” Messonnier said. “To date, our strategies have been largely successful.”

On February 29, the CDC announced the first coronavirus death in the U.S.  They issued a statement that read, “Preliminary information raises the level of concern about the immediate threat of COVID-19 for certain communities in the United States.”

We can all understand human error. What’s harder to understand is why the CDC was not forthcoming with the FDA. They had made some serious mistakes, but they hadn’t committed a crime. Perhaps, as many scientists and government health officials have anonymously confirmed to The Post, “the CDC violated its own laboratory standards in making the kits. The substandard practices exposed the kits to contamination.”

Still, this was and continues to be a national emergency. America was desperate for those tests and the CDC was worried about their reputation.

The CDC knew that the first two components of the test were working properly. The third component, which had been contaminated, was not required. Other countries didn’t feel the need for the refinement that the third component was intended to provide. America needed a test. Do I have COVID-19 or not? Yes or no?

When the CDC discovered the contamination issue, they could easily have told labs, ‘Okay go ahead and use the first two parts of the test kit. That’s really all you need anyway.’ What were they doing for a month while the disease was spreading across the country? Why did they not dispense with their emergency instructions that the test had to be used as designed?

Thankfully, the FDA overruled them. Two questions. What took them so long? And why didn’t the FDA relax their own prohibitive approval requirements so that private laboratories could move forward with tests of their own?

This was a bureaucratic nightmare.

And, in the end, it was the private sector that saved the day.