New NIH, CDC Study Finds Virus Can 'Remain Infectious in Droplets in the Air for Hours' 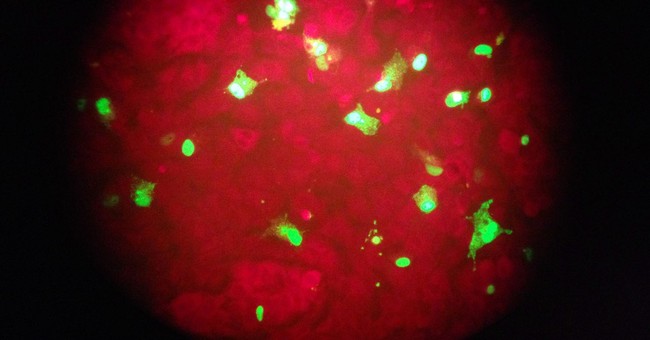 FILE – In this Feb. 26, 2015 photo taken through the eyepiece of a microscope, human cells infected with the flu virus glow green under light from a fluorescence microscope at a laboratory in Seattle. The U.S. government estimates that 80,000 Americans died of flu and flu complications in the winter of 2017-2018 – the highest flu-related death toll in at least four decades. (AP Photo/Ted S. Warren)

A new study published in the New England Journal of Medicine conducted by scientists from the National Institute of Health (NIH), CDC, UCLA, and Princeton University “found the coronavirus can remain infectious in droplets in the air for hours and surfaces for days.”

The NIH reports, “The scientists found that severe acute respiratory syndrome coronavirus 2 (SARS-CoV-2) was detectable in aerosols for up to three hours, up to four hours on copper, up to 24 hours on cardboard and up to two to three days on plastic and stainless steel.”

Long before the Coronavirus changed life as we know it, we’ve been told that coughing and sneezing can spread colds and viruses. That’s easy enough to understand. And ever since it became the main topic of conversation, we’ve heard that it can dwell on surfaces for days.

But this is the first time we’ve heard that it can “remain infectious in droplets in the air for hours.” In fact, this study found that the virus can live for at least three hours in aerosols.

Reuters highlighted some of the scientists’ specific findings:

In terms of half-life, the research team found that it takes about 66 minutes for half the virus particles to lose function if they are in an aerosol droplet.

That means that after another hour and six minutes, three quarters of the virus particles will be essentially inactivated but 25% will still be viable.

The amount of viable virus at the end of the third hour will be down to 12.5%, according to the research led by Neeltje van Doremalen of the NIAID’s Montana facility at Rocky Mountain Laboratories.

On stainless steel, it takes 5 hours 38 minutes for half of the virus particles to become inactive. On plastic, the half-life is 6 hours 49 minutes, researchers found.

On cardboard, the half-life was about three and a half hours, but the researchers said there was a lot of variability in those results “so we advise caution” interpreting that number.

The shortest survival time was on copper, where half the virus became inactivated within 46 minutes.

According to the CDC, that the disease is spread through respiratory droplets produced when an infected person coughs or sneezes. These droplets can land in the mouths or noses of people who are nearby or possibly be inhaled into the lungs.”

The results provide key information about the stability of SARS-CoV-2, which causes COVID-19 disease, and suggests that people may acquire the virus through the air and after touching contaminated objects.

Hospitals have long been recognized as breeding grounds for germs. We’ve all known people who have picked up infections during hospital stays.

On Saturday, an 82-year-old woman with advanced emphysema became the first person to die of the coronavirus in the state of New York. She had been admitted to a Brooklyn Hospital on March 3 and officials say she contracted the virus inside the facility.

In fact, thirty of the U.S. coronavirus deaths have occurred at one facility, the Life Care Center in Kirkland, Washington.

It will be a challenge for hospitals to maintain the standards of cleanliness required to eradicate this virus, but they must try. It might mean hiring additional personnel to stay on top of disinfecting frequently touched surfaces such as door handles, elevator buttons, light switches, etc. But this level of deep cleaning will go a long way in preventing healthcare workers, patients, and visitors from contracting the virus. Finally, they should take measures to refresh the air as much as possible.

State of the Union Highlights Reel
Townhall
AWKWARD! Watch Rep. Byron Donalds paint former Twitter execs into quite a corner
Twitchy
Biden Blithely Admits One of Documents FBI Seized Is From 1974 in Troubling PBS Interview
Redstate
BREAKING: James O’Keefe Put on Leave at Project Veritas. Has There Been a Coup?
PJ Media