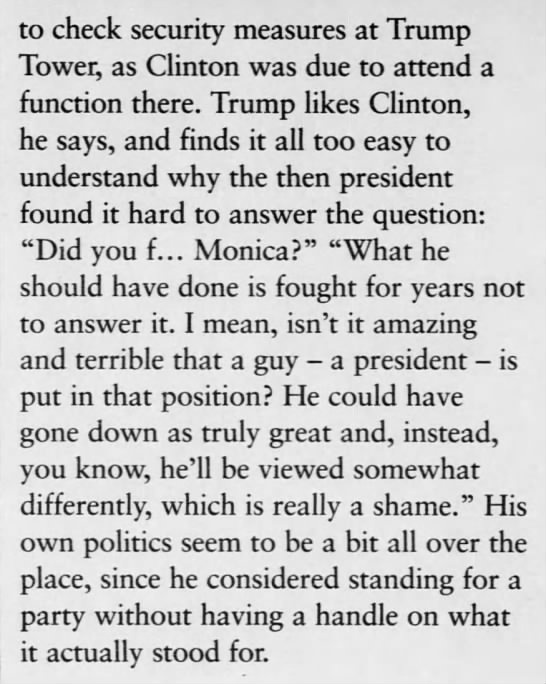 This excerpt is from an article published in an Australian newspaper, The Sydney Morning Herald, 3 February 2001. Read the full article here.

Dear Republican Presidential Candidate, Bill Clinton’s presidency would never have been history’s shining example of greatness, even without his Lewinsky affair, subsequent lie to Congress under oath and impeachment. A quick search of RedState will more than adequately tell that story.

The revelations from the newspaper clipping are distinctly troubling from the mind, then unabashedly from the mouth of an American presidential candidate. If Trump had not repeatedly proven his inability to respect the means to an end, his comment could be brushed off as unremarkable, inappropriate at the time, or hyperbole.

Is it Trump’s antipathy toward the women who were victimized by his friend Bill or maybe it’s just Trump’s instinctive response to lie if the truth will stand in the way of winning or both?

Today is National Chewing Gum Day. When the first National Chewing Gum Day was celebrated remains unanswered. However, the first known evidence of chewing gum was picked off the ground at a Finland archaeological site in 2007. Although the owner of the gum is unknown, tooth impressions were found that may aid their CSI team. It’s been determined to be around 5,000 years old and made from bark tar.

Even chewing gum has a sordid past. An article from an 1891 Indiana newspaper implies that little girls were addicted to chewing the sweet sticky stuff and that if the rumors were true, it was because their gum was tainted with opium. The self-identified “Goshen Democrat” expressed more frustration at an attempt by the ladies to stop alcohol consumption than whether chewing gum was corrupting their youth.

Democratic Strategists Acknowledge Grim Reality: Kamala Harris May 'Do More Harm Than Good'
Townhall
A gay rights activist explains why the CDC's Provincetown study may be fatally flawed
Twitchy
Texas Democrats Finally Begin to Realize They Are Screwed
Redstate
The Day the Petty Tyranny of Nancy Pelosi Was Brought Down
PJ Media