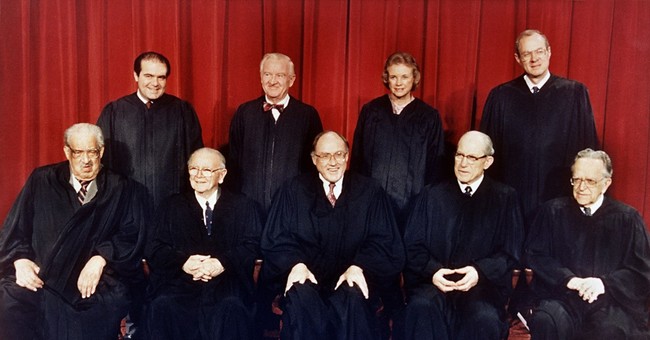 William Brennan is to liberals what Antonin Scalia is to conservatives when it comes to the Supreme Court- an icon.  This year marked the 50th anniversary of what Brennan calls his “best decision” ever.  He described it as “injecting passion” into an area where “rationality” had led the law astray.  Of course, he is ignorant of the fact that “sterile rationality” is the very guardrail that defines legal interpretations.  Passion is the purview of politicians, not judges.

March marked the 50th anniversary of the decision in Goldberg vs. Kelly.  To recall the details of the case, Kelly was a recipient of welfare benefits under both federal and state law.  A caseworker became suspicious that Kelly was ineligible for the benefits and met the person face-to-face after which it was determined that Kelly was ineligible. He was then sent a letter advising him of the decision where he could, with counsel if necessary, dispute the termination of benefits.  Granted, most of these facts were not present once the case was first presented.  Only after litigation was started was the “appeals” process put in place.  The original suit claimed Kelly and others were being denied their Due Process “rights” to “life, liberty, and property” under the Constitution and the 14th Amendment.

Under ordinary conditions, while this appeals process was set into motion, the Court could have simply declared the case moot and moved on, but they did not.  Instead, in a 5-3 decision authored by Brennan, they decided to blur the lines between traditional notions of property and government benefits and entitlements.  After all, it was neither life nor liberty that was being denied Due Process, and Brennan pointed that out.

Welfare benefits are not “property” in the traditional sense that formed the Due Process Clause of the Constitution or the 14th Amendment.  If anything, they are a gratuity bestowed by the state.    They are not property at common law and do not even resemble common law property rights.  Instead, Brennan insisted that welfare recipients had a “brutal need” of assistance.  In short, “need” created a property interest.  Brennan also adopted a popular belief in 1960s legal circles which argued that society is not ordered around rights recognized at common law or found in the Constitution, but by “entitlements.”  Through legal sleight of hand, welfare benefits were placed on par with clearly protected common law property interests like stock options and private pensions.

This blurs the lines between old and new property.  If this new property is really “property,” then it follows that the government cannot take away or even lower welfare benefits any more than they can just take away your stock options or private pension.  That would be a “taking.”

The opinion further implies that all property, in effect, is an entitlement- ultimately a matter of government creation.  Some politicians make the same blithe argument as in Obama’s 2012 famous dictum: “you didn’t build that.”  It is one thing for a politician to blurt that out in the heat of a presidential campaign and quite another for a majority opinion from the Supreme Court to imply the very same thing.

Having decided that a welfare payment, or any entitlement, is property, Brennan then decided that the process for terminating benefits was “undue.”  The imposition of a quasi-judicial process, he said, with legal counsel and cross-examination would restore more “due” to the process and “promote the dignity of welfare recipients.”  Only a lawyer could come to the conclusion that cross-examination somehow magically restores “dignity.”

The Supreme Court in 1970- like the Court today- has no expertise in the efficiency of bureaucratic procedures.  There is no reason to believe that New York, in this case, struck the wrong balance.  Kelly, after all, continued to receive his welfare benefits.  States, not the Court, know more about their budget shortfalls and finances.  In his opinion, Brennan took aim at the dissenters view regarding the notion of property in the original understanding of the term for Constitutional interpretation.  He called their view, best described as originalism, as “arrogance cloaked as humility.”  In this case, Brennan felt no need to put on a cloak on his judicial activism.

Perhaps the silver lining in this saga is that the decision has been distinguished from other scenarios.  For example, three years later in Matthews vs. Eldridge the Court ruled that individuals have a statutory property right to Social Security benefits and this implies due process concerns, but a pre-termination of benefits hearing is not required.  That is, although Kelly was weakened in some aspects and cabined, it nevertheless remains and has never been overruled.

This then leads to another consideration since socialists like to beat around the issue.  Should a socialist ever get the opportunity to appoint a Supreme Court Justice, one can rest assured that Kelly vs. Goldberg will be resurrected in its full glory and the blurring of the line between property and entitlements will be obliterated.  All those things they now claim you have a “right” to- healthcare insurance, guaranteed basic income, free college education, etc.- have their roots emanating from this decision and the mindset upon which it is based.