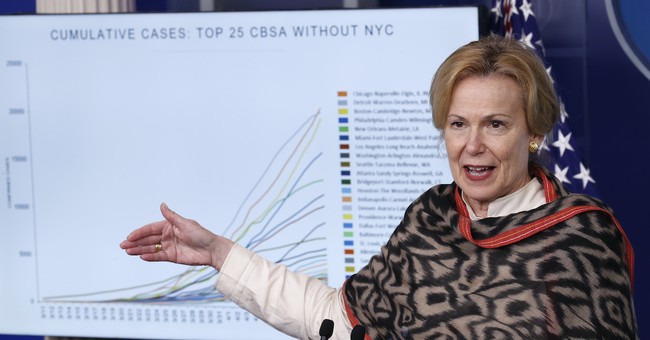 Enough! As most of you know, I’ve been producing a nightly roll-up and analysis of Wuhan Virus statistics on a very basic level. I’ve never claimed to be any sort of expert on crunching numbers. In fact, on at least one occasion that I can remember, I’ve recruited a few no-kiddin’ experts in that field…experts who actually get paid big bucks…for being right. these guys don’t get paid when they are wrong, which is unlike Dr. Fauci or COL/Dr. Birx who collect their taxpayer-supported checks, right or wrong. These guys told me what I kind of already knew, bad data was skewing the analysis.

I also remember a common acronym in data analysis and computer coding…GIGO…Garbage In, Garbage Out. That is what is going on right in front of us…and with the public, full-throated permission promotion of the Federal Government. I wrote about this earlier, chiding COL/Dr. Deborah Birx for being part and party to this.

In at least one instance, I saw COL/Dr. Birx flat out encourage providers and reporting institutions to put blatantly false information into the system and thereby preclude effective decision making.

Skewing this type of data makes it more difficult for the real decision-makers (that’s not COL/Dr. Birx (or Dr. Fauci)) to make a sober, reasoned assessment as to when and how to get America back to work. Neither COL/Dr. Birx’s commission nor mine expired the day we got handed our DD214’s. I am sincerely hoping she will reflect on that and adjust the Wuhan Virus “Cause of Death” reporting standards accordingly.

Read: Opinion: Are We Inflating the Numbers on Wuhan Virus? Of Course We Are!

Obviously, the Federal Government has publicly given leftists a license to steal. The well-known communist mayor of Gotham City has already given instructions to falsify data. As my good friend (and awesome boss!) Streiff writes:

Further down he gives the “why.”

In particular, many Democrats see the pandemic as a way of convincing the Congress to make whole state budgets that are being crushed by the lack of revenue that is, in large part, the direct result of heavy-handed police state tactics implemented by Democrat governors and mayors. What better way to prolong the crisis, both in New York and the nation, than by inflating the body count more than New York has already done so?

Streiff is spot on. The left knows the numbers and the graphs were going the “wrong way” to support their view that top-down control of our lives is necessary. They are reacting to the common sense assessment that from a logistical point of view, this war is just about over. There could be some “Battle of the Bulge” type moment, but we are well prepared to deal with such. We have won this war. But, the left won’t allow that line of thinking.

The power-hungry folks on the left can’t let this finish up too soon. A low death count inhibits their desire to ticket and fine people for attending religious services or peaceably assembling to assert their Constitutional rights. It keep them from stampeding Americans into adopting laws that dilute their liberties. It’s time for all of us to contact our representatives in DC to demand a relook on how we count China Virus Deaths. Here is the White House Switchboard number for comments: 202-456-1111. Call and make your views known.