'You Might Be a Technocrat If ...' Conservatives Must Argue Principles, Not Numbers, If We Are to Survive 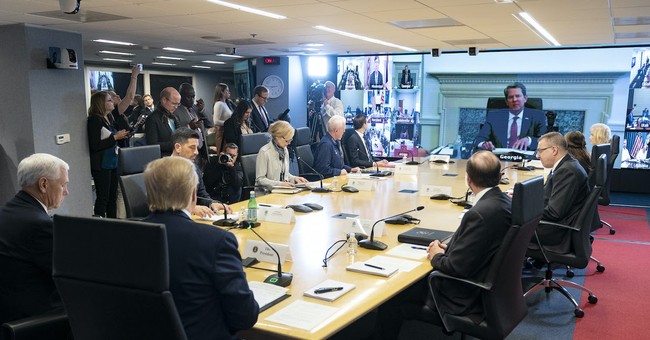 When the Founders signed their names to the Declaration of Independence, they were saying in effect: “These principles are so important to us that we will die on the gallows before we give them up.”

Few Americans, including conservatives, really think in terms of hard-core principles like that now. A case in point: the punditry, liberal and conservative, discuss the Wuhan virus almost entirely in terms of infection numbers, expert predictions, and economic statistics, rather than principles.

When the occasional commentator points out that the government, in the name of safety, is savaging Americans’ civil liberties today–the right to peaceably assemble, keep and bear arms, run a lawful business, attend church, etc.–he is met with: “But but but … the experts say people could DIE if we don’t shut people in their homes and force businesses to close, so the crisis makes it okay.”

If every decision by the country were made on metrics of safety, the United States never would have been formed in the first place. The Founders would have said: “Rebellion is NOT safe. We might all get our necks broken. Better to stomach the King’s oppression.” For that matter, no one would ever be allowed to smoke, drink, or eat a Big Mac; and skateboarding would be illegal.

Moreover, if the government can do anything it pleases during a crisis, then what good are civil liberties? Any time the government powers want to enact an unprincipled change, all they must do is declare a ‘crisis’ of one sort or another. There’s always a crisis near at hand.

Civil liberties are supposed to be a red line of principle the government may not cross, no matter the cost, so as to hold back mankind’s perennial tendency toward government tyranny and societal self-destruction.

Yet Americans today seem quite content to embrace burgeoning authoritarianism, as long as the authoritarianism is rationalized to us by experts in medicine, law, social science, and the media. Oh, and Hollywood! Because people in Hollywood are experts on EVERYTHING, and we need to listen to them, dontcha know.

THE TYRANNY OF EXPERTS

We are not in danger of ‘becoming’ a technocracy–we ARE a technocracy. The train has arrived. Citizens elect leaders and lawmakers, who promptly delegate the running of the country to credentialed mandarins: unelected technical experts, mangers, and advisors, who wield vast and ever-growing authority.

Managerial experts claim to possess technical skills that enable them to achieve (or to advise others how to achieve) whatever outcomes are worth achieving. “Expertise” is a claim to efficiency in achieving those ends. It is the basis for a manager’s authority to manipulate human beings into compliant patterns of behavior. The authority of expertise legitimates many of the institutions that dominate modern social life–government bureaucracies, psychological counseling, progressive education, and more. The claim of expertise purports to justify all kinds of social control …

Corporate bureaucracies cannot run the country; they can barely run themselves. Yet appeal to the authority of expertise is used to make the pronouncements of managers unquestionable. The experts declare non-experts incapable of deliberation, excluding ordinary human beings from debate on the grounds of their alleged incompetence.

The cancer of expert authority is so advanced in the United States that psychiatrists are now floating the idea they should have the power to impeach an elected president for what they judge to be mental unfitness, or disqualify presidential candidates they find unsuitable.

What they propose is a fundamental change in the nature of American government, with medico-experts at the top of the pyramid, dictating the limits of discourse and action within which voters may make their choices.

Much like the medical-expert field, progressive crusaders for technocracy would also like to ‘reform’ the First Amendment, anointing “news experts” to “fact-check” and oversee the news, then suppress outlets–almost always conservatives outlets such as RedState–they find to be spreading “misinformation.”

But perhaps the most heinous case of encroachment on the basic civil liberties of Americans comes from the legal profession. Over the last century and a half, progressive legal scholars and jurists have systematically deconstructed and ‘managed away’ the intuitive principles of the Founders and the Constitution, brick by brick.

When the average citizen says something like, “Wait! It very clearly says ‘shall not be infringed’ right there,” the legal experts come back with: “You aren’t an expert, and you don’t understand that the document doesn’t really say what it says. Now shut up and go back to digging your ditch.”

The legal profession has managed to build a species of priesthood within the state, guarded by magical language and credentialism, to render the citizen’s own laws and legal system almost wholly inaccessible to him; and to make their own knowledge and services so powerful as to be inescapable.

The United States today might be better called a *legitocracy*–a government by the legal priesthood for the legal priesthood. Judges, lawyers, prosecutors, regulators, law schools, bar associations, and legal-activism conglomerates like the ACLU and GLAAD use their specialized knowledge to function as gatekeepers of society’s rules, politics, and culture.

Nothing is accomplished without the involvement of the legal priesthood. Armies of lawyers draft bills for elected lawmakers, who enact their recommendations with only a vague understanding of their mandates. Then the lawmakers turn the laws *back over* to prosecutors, regulators, and jurists for implementation and enforcement …

Thus the legal priesthood operates in a closed system, disconnected from the populace and unaccountable to anyone but themselves. To be sure, the priesthood declaims with great eloquence about “democracy,” a “nation of laws,” and “the people”; but they amount to an insular social class–the card carriers in a one-party state. The rest of us are merely along for the ride.

Legal experts have so warped Americans’ thinking that they don’t even expect to understand their laws anymore, or to have their laws reflect common-sense principles. And the expert class has exploited the populace’s ignorance to turn them into techno-surfs, shut in their houses watching Netflix and fiddling on their phones until the experts tell them they can go outside and pursue life and happiness again.

America’s present class war is often styled as one between progressives and conservatives, Democrats and Republicans, red states and blue states, metropolitan and rural areas, or rich and poor.

The former are far more numerous; the latter, while a minority, hold most authority, institutional power, and wealth in the nation–ranging through medicine, law, media, government, finance, technology, entertainment, and education. In a very real sense, the managerial elite amount to a new American aristocracy.

The Wuhan virus crisis has put America’s class war into overdrive. The expert class decided to shut down the country and work from home. For them, the decision made sense. Few if any of them would lose their jobs. Many can telecommute. A great number work for the government, government-adjacent institutions, or large businesses that will weather the storm or be wholly unaffected, attached as they are to the government teat.

The American expert class looked at the numbers and dispassionately concluded that the lives worth saving are their own. The ugly feelings and class division that will be generated by this decision will probably eclipse the bad feeling generated by the financial crisis of 2008.

NUMBERS AND THE DEATH OF PRINCIPLE

To the expert class in America, it is numbers rather than the Constitution or any other set of principles that reign supreme. If ‘the numbers’ suggest fewer people–and particularly fewer of the really important and worthwhile people–will die by confining everyone and shutting down the economy, so be it.

And arrest anyone who holds a party in his own home, or tries to go to work and feed his kids, or goes to church. To hell with principles. The managers know best.

Average citizens bear blame in all this. They chose to believe the expert class when they told them that principles aren’t real, that only numbers matter. They have allowed the expert class to bamboozle and shame them with cherry-picked, spurious statistics into violating one fundamental principle after another–constitutional, religious, cultural, common sense, or otherwise–always with the promise of more money, convenience, entertainment, and virtue signaling in return.

Well, the bill has come due.

Without robust and widely agreed-upon principles to cement pubic resolve and resist the technocrats, they can do what they please. We are seeing it unfold now, with horrendous consequences to the fabric of the society. Not even a president resistant to technocratic manipulation can withstand the full might of the technocracy–not with the whole country now clamoring for technocrats to keep them safe and fix everything.

But technocrats cannot keep us safe. They pretend to predict the future, but they cannot. They pretend to have solutions to all social problems; but all they do is create new and different problems. Liberal progressives have been pushing for and expanding technocracy and coersive social engineering for a century, treating society like a math problem a few smart people could solve.

Have they solved it?

We still have roughly as much poverty, drug use, disease, crime, etc. as before we turned the nation over to technocratic managers to engineer to progressive perfection. Solutions are not what we’ve received. We’ve received leviathan and fantastically expensive bureaucracy, sprawling campuses and state buildings filled to the ceilings with technocrats all eager to manipulate the society.

If ordinary Americans do not rediscover voluntary and commonly understood principles soon to hold them together, the United States will become a nation held together entirely by coercion, both physical and legal. Count on it.