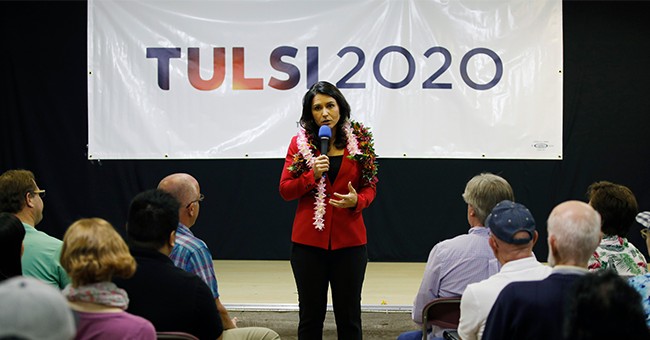 The dark horse of the Democratic primary race has officially suspended her campaign.

Hawaii Rep. Tulsi Gabbard announced in a video released on social media that is officially suspending her campaign while simultaneously acknowledging that the Democratic party has chosen former VP Joe Biden as their candidate and endorsed him.

“Although I may not agree with the vice-President on every issue, I know that he has a good heart and he’s motivated by this love for our country and the American people,” said Gabbard. “I’m confident that he will guide our country guided by the spirit of aloha, respect, and compassion and thus heal the divisiveness that has been tearing our country apart.”

“So today, I’m suspending my presidential campaign and offering my full support to vice-President Joe Biden in his quest to bring our country together,” continued Gabbard.

Judging by the comments Gabbard is receiving, not many people seem to be happy about this as they don’t feel that Biden is the right candidate. Others are wondering if Gabbard, who is not seeking reelection, is setting herself up for the position of vice-President herself.

Biden promised that his running mate would be a woman, and Gabbard checks off a lot of the boxes identitarian Democrats would like checked.

Though Sanders himself has not yet announced his own campaign’s suspension, it’s likely coming soon. Sanders recently stopped running all of his ads on Facebook and has announced that he’s reassessing his campaign.

(READ: Sanders to “Assess” His Campaign After His Loss to Biden on Tuesday)

After Gabbard’s announcement and endorsement of Biden, it’s likely Sanders will follow suit as being a holdout at this point seems silly. Biden currently holds the vast majority of the delegates with 1,100 out of the 1,991 needed. In order to win, Sanders would need to win landslides of 60% or more in every remaining primary which he hasn’t been able to do one time this election season.

So Biden is, with overwhelming probability, this primary winner. That said, despite Gabbard having dropped out of the race, she may not be done this election season yet.