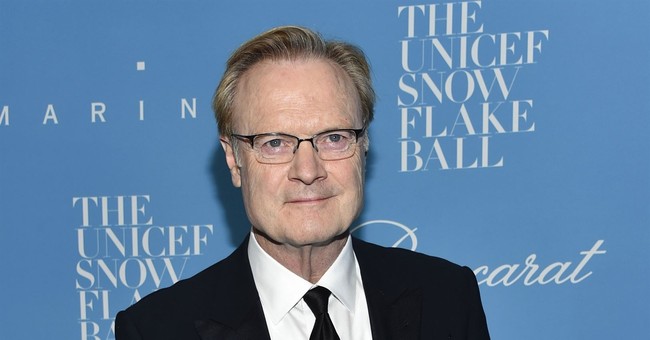 FILE – In this Nov. 29, 2016, file photo, Lawrence O’Donnell attends the 12th Annual UNICEF Snowflake Ball in New York. The MSNBC anchor apologized on Sept. 20, 2017, after clips surfaced of him profanely yelling at staffers in between segments of his prime-time program.(Photo by Evan Agostini/Invision/AP, File)

There are a lot of trends going on thanks to the outbreak of the Wuhan Virus but one of the more disgusting ones is the leftist media utilizing the Coronavirus scare as a way to make people be untrusting and hateful towards President Donald Trump.

MSNBC’s Lawrence O’Donnell is one such media figure. Instead of helping update us on the latest in terms of what’s going on with the virus and what federal and state governments are doing to limit the spread, O’Donnell decided to use it as a way to bash Trump:

The most incompetent and uninformed president in history has led the federal government into the worst emergency response to a pandemic that we have ever seen in this country. One of our guests will tell us that it’s one of the worst responses by any government in the world today. More people are sick in American tonight, because Donald Trump is president.

More people are dead and dying in America tonight because Donald Trump is president. More people are losing more of their life savings and retirement accounts because Donald Trump is president as we will discuss in this hour. The president’s ten-minute speech from the Oval Office last night provoked more loss of stock market value, which is to say, retirement funds, than any other speech by any other president in history. If Donald Trump had just said nothing last night, where would we be today?

O’Donnell is hardly alone. Washington Post reporter Jennifer Rubin is also adding fuel to the anti-Trump fire with her hot take that Republicans are in greater danger from the Coronavirus because Trump and right-wing media are downplaying the threat.

Jennifer Rubin says that more Republicans will die of coronavirus than Democrats because President Trump and right-wing media have downplayed the threat pic.twitter.com/wmzMMPc3qZ

As my colleague Brad Slager reported, everyone from CNN to The Hill is doing their part in making Trump’s handling of the virus and Fox News reports seem like the thing we’re all going to die from.