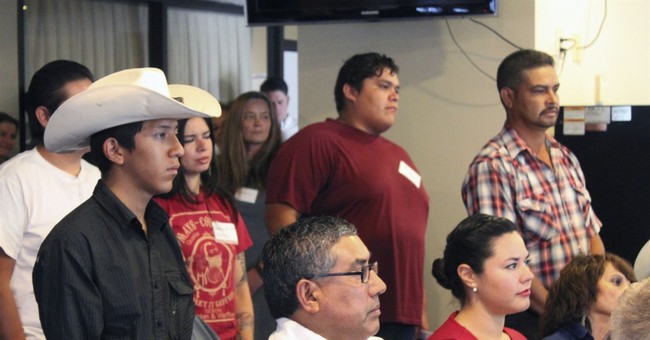 FILE – In this Sept. 30, 2015, file photo, a group of young farmers and ranchers stand up as advocates speak about discrimination and civil rights violations involving Latinos and women during a news conference in Albuquerque, N.M. A federal judge has dismissed claims by Hispanic ranchers along the New Mexico-Colorado border who allege the U.S. Forest Service ignored the social and economic consequences of limiting grazing on land that had been used by their families for centuries. The ranchers say they are disappointed, since they saw the case as a way to validate concerns about discrimination and civil rights violations that have been documented over the years. (AP Photo/Susan Montoya Bryan, File)

Social justice warriors love to create their own vernacular to force us to use, and one such word is “latinx.”

The term is used by SJWs as a way to refer to Latin people while avoiding gender qualifiers such as “Latino” or “Latina.” That way, they come off as more “inclusive” in their language, and they avoid offending anyone who may identify as a certain gender. Not using the term “Latinx” online will eventually make someone from the woke crowd angry and they may chastise you for your lack of propriety.

As it turns out, the woke crowd isn’t as woke as they think they are. As the Free Beacon reported, it turns out the Latin community, or “Hispanic” as they prefer to be called, doesn’t actually like the “Latinx” label:

Support for “Latinx” among Hispanic Florida Democrats is even lower than its support among Hispanics nationally—just 2 percent of respondents to a nationwide poll conducted last November identified “Latinx” as their preferred term.

This tells us a couple of interesting things. For one, it reminds us that the SJW/woke crowd doesn’t have its fingers on the pulse of our society like they claim to. Their position as moral arbiters isn’t as secure as they may hope.

The other is that this just more proof that the woke crowd works against the interests of the communities it claims to look out for and protect. It operates independently with arbitrary rules and codes of conduct under the guise that it’s doing so out of respect for the subjects in question without even asking if the subjects in question care for it.

As we can see, the subjects in this situation don’t. Yet, it’s likely that the SJW crowd will continue to use the phrase and proclaim they’re more socially conscious than you for doing so.