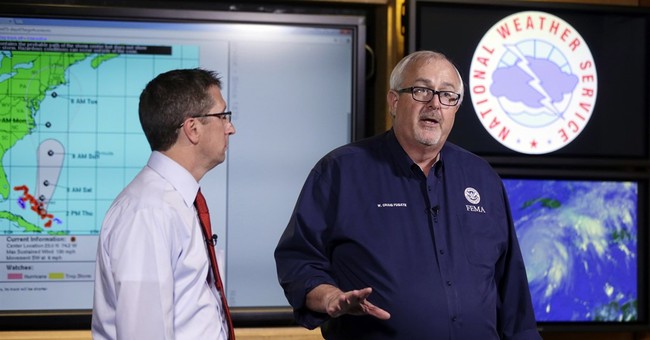 FILE- In this Oct.1, 2015 file photo, Craig Fugate, Administrator of the Federal Emergency Management Agency (FEMA), right, talks about the status of Hurricane Joaquin as it moves through the eastern Bahamas as Rick Knabb, Director of the National Hurricane Center, left, participate in a media briefing at the National Hurricane Center. The U.S. government is set to release its forecast for how many hurricanes and tropical storms are expected to form over Atlantic and Caribbean waters in the next six months. It’s an annual reminder from the National Oceanic and Atmospheric Administration that coastal living comes with significant risks. (AP Photo/Lynne Sladky, File)

Some people are apparently getting fed up with how the media are treating the Wuhan virus. One of those people is former FEMA Administration Craig Fugate. He appeared on MSNBC via Katy Tur’s show today and things went a little haywire. For some reason, they decided to put a serious professional like Fugate opposite a hack Obama official named Andy Slavitt.

Here’s how it ended.

Slavitt, whose claim to fame is managing the failure that is Obamacare, tries to lecture the former FEMA head on emergency procedures and what needs to be done. Slavitt himself has zero expertise in that area, which makes the decision to even have him on the show somewhat odd (they were no doubt looking for some anti-Trump fire).

Here’s Slavitt a week ago delivering one of the more hysterical gems of the current pandemic.

Currently experts expect over 1 million deaths in the U.S. since the virus was not contained & we cannot even test for it.

This will be recorded as a major preventable public health disaster. I will try to relate what I learned from a long day of calls about what is happening.

Meanwhile, Fugate is a veteran of disasters, resource management, and managing emergency teams. Getting lectured by Slavitt was just too much for him to bear and he stormed off the set. And to be sure, Fugate was an Obama official himself. He’s just got enough integrity to focus on his expertise instead of trying to take political shots.

Eventually, Fugate would go to Twitter to address the matter and it seems Slavitt realizes he screwed up.

Responses from all three. pic.twitter.com/DdXUfM04q1

Yes, times are tense, but that’s not an excuse for a know-nothing like Slavitt to go off an a former FEMA head when it comes to emergency management. The fact that Slavitt was even put against Fugate is an indictment of MSNBC’s bad decision making. This is the same network that touts clowns like Max Boot and Tom Nichols as “experts.” Their obsession with argumentation and partisanship is long standing.

If the media had any integrity, they’d reset and stop putting these people on the air. This is a time to hear from those who actually have something to say based on their real expertise, not hacks trying to push a narrative. Good for Fugate for letting enough be enough and taking a stand.