My colleague at Red State, Sister Toldjah, wrote a celebratory column on Adam Kinzinger’s hasty retreat from the corrupt world of Illinois & US politics entitled, “Good Riddance, Adam Kinzinger,” beating me to the punch. She did a great job.

And I was disappointed. Headed back to the drawing board, I stopped dead in my tracks.

I realized I still had a couple of points to contribute.

1. First off, this man makes a point to refer ad nauseam to his “service in Iraq.” He rode into office in a Blue district inside Chicago’s grubby, corrupt Dem machine by specifically opening almost all of his speeches with “When I returned from Iraq in 2009 …” This sounded as if he was kicking in doors in Fallujah with a special forces unit, risking his life every moment. Not our little Adam, oh no. 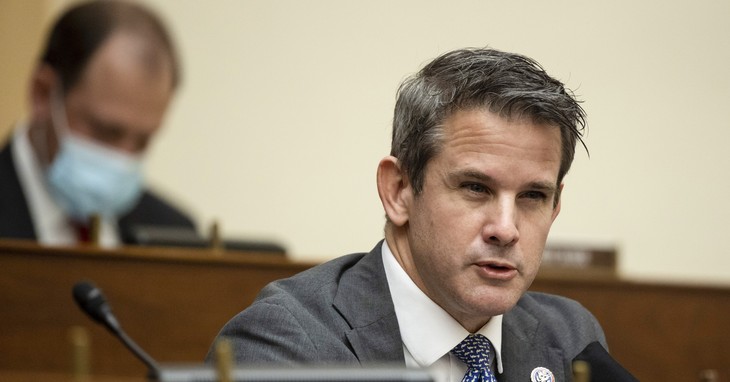 Kinzinger was flying tens of thousands of feet above and generally hundreds of miles away from any danger in a KC-135. The KC-135 is a “Stratotanker” and would refill AWACs, fighters, and other aircraft well away from any hot zones. So the only risk Kinzinger would ever face was falling asleep as he flew his bus through the sky. Can you say, battle-zone phony?

2. And this guy, who practically invented the term RINO, came to Congress riding the wave of his incomplete and false half-narrative of “being in” Iraq but mainly riding the wave of the Tea Party slaughter of Obama and the other phonies at that time. Soon he would join those phonies, in spite of deceiving Mike Pence and Sarah Palin along the way into mentoring and backing him. What kind of poser betrays people who extended a helping hand when he was nothing, helping him rise to the People’s House in our nation’s capital?

3. Of course, there’s the tiny issue of his constant snubbing, criticisms, and hatred spewed like bile on President Trump. To me, this positioned Kinzinger as Target #1 to remove — with prejudice — from our government.

In looking for YouTube videos to support my case here, I found the most extensive assortment of scolding, simple-minded and self-aggrandizing soundbites I’ve ever encountered (and that’s a lot).

In the video below, a couple of months after the fortified election of a mental defective as President and less than two weeks before the inauguration of the destroyer-in-chief, Kinzinger is in top form as a whiner and weasel-faced snitch. Talking about President Trump and relishing kicking a good man while he’s down, Kinzinger shares his deeply held fantasies about America having “to rise from the ashes” and “having a better story to tell.” This after four years of peace, zero US military personnel killed in Afghanistan for over 18 months, the unheard-of feat of America’s energy independence, the border wall raging ahead, an electrifying economy, and Black and Hispanic Americans deserting the Dems. It goes on and on.

When President Trump began his term of what would be four years of Conservative bliss and tremendous results for America, I identified three problem politicians: 1. Liz Cheney — she will be dealt with next November and be sent back to her evil dungeon in Wyoming; 2. Ben Sasse — who needs a good whoopin’ like nobody’s business and seems like Kinzinger’s brother from another mother (this similarity is alarming as having not just one or two infantile traitors to our President in Congress but three means we have to double our efforts to take out the trash and replace these sacks with people of integrity and intelligence); 3. Kinzinger. Nuff said: he’s going to crawl back under whatever rock from whence he came.

And at that time, friends, we will be one step closer to a truly Conservative, God-fearing, and decent government for all Americans.