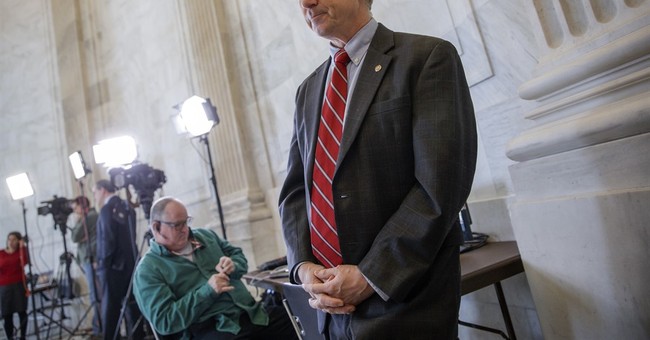 Attorney General Jeff Sessions announced this week the Trump administration’s reversal of the Defense Department’s 1033 program, an Obama administration policy that restricted the types of military surplus equipment transferred to local and state police departments.  As Streiff aptly noted yesterday, arming police with military gear and dressing them up like soldiers opens the door to blurred lines between local law enforcement and occupying forces, and is a recipe for disaster. And given the current tensions between police and minority communities, we ought to be careful with the messages we’re sending.

Senator Rand Paul tweeted his opposition to this decision yesterday:

It's one thing for fed officials to work w/ local authorities to reduce or solve crime. It's another for them to subsidize militarization.

All will be major issues this fall. Any order today still needs to be funded and I'll bring this issue to the Senate floor.

Paul also published an op-ed in the New York Post last night speaking out against the Trump administration’s decision to reverse the 1033 program:

To support our local police, we must first realize they aren’t soldiers. But today the line between the two is being eroded.

It’s no surprise you can find big government right at the heart of this problem. Washington has incentivized the militarization of local police precincts by using federal dollars to help municipal governments build what are essentially small armies — where police departments compete to acquire military gear.

Thousands of bayonets have been handed out as part of the program’s reversal (horses and bayonets, anyone?), as have armored vehicles and other such equipment in towns with relatively small populations, and over a third of this “surplus” material is new.  Passing it off as extra gear as justification for distribution sets a dangerous precedent; as Paul puts it, “When we couple militarizing law enforcement with the erosion of civil liberties and due process that allows the police to become judge and jury… we see the magnitude of the problem.”  This as a massive overreach by a federal government providing incentive for the militarization of local police departments, a move that risks further alienating the relationship between minority communities and police departments.  And as Paul notes, the Justice Department ought to be leading a national conversation about criminal justice reform that would help to eliminate race as a point of disparity in the application of justice:

Given these developments, it’s natural for many Americans — especially minorities, given the racial disparities in policing — to feel like their government is targeting them. Anyone who thinks that race does not still, even if inadvertently, skew the application of criminal justice isn’t paying close enough attention. Our prisons are full of black and brown men and women who are serving inappropriately long and harsh sentences for nonviolent mistakes in their youth.

Paul has pledged to introduce legislation that would prohibit the transfer of military equipment, such as armored and MRAP vehicles to local and state law enforcement, but would allow for the transfer of defensive equipment such as body armor. In an effort to provide more transparency about the use of such equipment, Paul’s proposal may open the door to a broader conversation about criminal justice reform that is long overdue.

Our police put their lives on the line daily to protect us, even those who wish them harm, and they deserve more thanks than they receive for the selfless work so many of them do. However, in order to properly recognize the work they do, we must also recognize what they are not responsible for doing– we cannot expect our police to become soldiers who patrol local city streets. Blurring those lines is just asking for trouble.