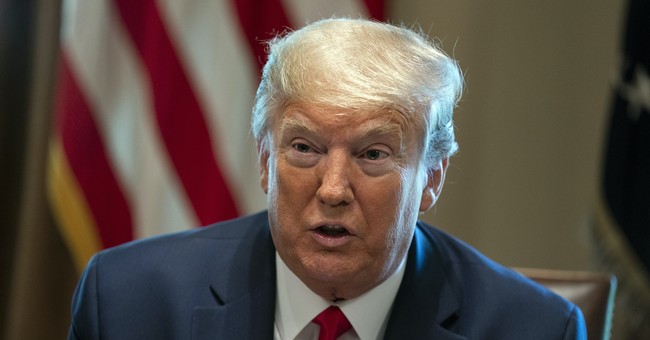 President Donald Trump speaks during a meeting with people that have recovered from COVID-19, in the Cabinet Room of the White House, Tuesday, April 14, 2020, in Washington. (AP Photo/Evan Vucci)

On Monday evening, as covered by RedState’s Jeff Charles, the President announced he’d be signing an executive order to freeze immigration temporarily:

“In light of the attack from the Invisible Enemy, as well as the need to protect the jobs of our GREAT American Citizens, I will be signing an Executive Order to temporarily suspend immigration into the United States!”

In light of the attack from the Invisible Enemy, as well as the need to protect the jobs of our GREAT American Citizens, I will be signing an Executive Order to temporarily suspend immigration into the United States!

As indicated in his tweet, the ban concerns employment, not public health. Americans are out of work, and the last thing we need is more people coming over to fill spots in a reopening economy.

Here’s how the Commander-in-Chief laid it out:

“So, the noble fight against the invisible enemy has inflicted a steep toll on the American workforce, as we all know. Millions of Americans sacrificed their their jobs in order to battle the virus and save the lives of our fellow citizens. We have a solemn duty to ensure these unemployed Americans regain their jobs and their livelihoods.”


In the President’s view, anything less than preventing an inflation of the workforce by foreign means would be unjust:

“Therefore, in order to protect American workers, I will be issuing a temporary suspension of immigration into the United States. … It would be wrong and unjust for Americans laid off by the virus to be replaced by new immigrant labor flown in from abroad.”

“This pause will be in effect for 60 days, after which the need for any extension or modification will be evaluated by myself and a group of people based on economic conditions at the time. This order will only apply to individuals seeking a permanent residency. In other words, those receiving green cards. Big factor. . As noted by the Leader of the Free World, the executive order “will not apply to those entering on a temporary basis.”

As reported by Politico, nuclear families will likely fall into exemption territory:

The order is also expected to carve out additional exemptions for so-called essential employees, including health care workers, and immigrants who come into the United States through immediate family members, according to a person familiar with the situation.

And, as also signaled during the news conference:

[T]he order will still allow the government to continue processing visas for hundreds of thousands of temporary employees, including farm workers, landscapers and crab pickers — the largest source of immigration.

Politico notes the President’s expected to sign the order Wednesday.

Let’s sit back and wait for the Democratic response. Is Trump being a megalomaniacal xenophobic racist to put limits on human imports? Or is he not doing enough and therefore crushing the soul of the nation?

Personally, I expect to hear both.

“Briefly delaying green cards for people, most of whom are already in the U.S. and working, and ignoring work visas doesn’t help U.S. workers and doesn’t ease pressure on hospitals. Can’t know for sure until there’s actually something official to read, but this looks more like a political gesture than a serious policy move.”

Brace for impact, all around.

Trump said he and others will review the situation at the end of the term and decide where to go from there:

“As we move forward, we’ll examine what additional immigration-related measures should be put in place.”

Do you think the plan goes far enough? Let us all know in the Comments section.

It’s on the House: Roughly 2 Million Americans Have Missed Their Mortgage Payments

China Is Not Happy That We Shot Down Their Spy Balloon
Townhall
SAVAGE thread exposing Rick Wilson for who he REALLY is should wake his 'fans' up (but it won't)
Twitchy
'Dark Brandon' Returns in Desperate Attempt to Gloss Over Joe Biden's Weakness
Redstate
Hot Air: No Global Warming for Eight Years
PJ Media