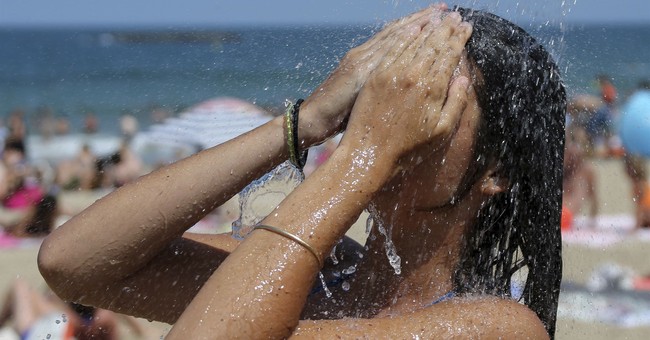 A young woman cools down under a shower at Biarritz beach, southwestern France, Wednesday, July 25, 2018 as the hot weather continues across the country. (AP Photo/Bob Edme)

There are multiple good reasons not to broadcast television from your bathroom, but perhaps none is greater than one recently discovered by a Sacramento reporter.

For a story on hairstylists and quarantine, KCRA3’s Melinda Meza videoed herself cutting bangs at her sink.

As reported by the New York Post, Melinda’s husband, Mike, evidently had stuff to do, too — like clean himself. In the shower. Naked. Right behind Melinda. On camera.

As the remote reporter trimmed her ends, back and to her left stood a figure on the other side of a thin piece of glass.

A water spout? A banana? Gonzo?

It was an unfortunate convergence of private time and public exposure.

Cutting to the studio, an anchor commented — presumably on chopping one’s own hair — “Oh, she is brave.”

The Daily Mail notes Melinda is bureau chief for Joaquin County, but according to some, Mike showed himself to be quite the chief as well.

One social media reactor posted, “Damn, why she wanna work when she’s got all that at home?”

A dad in Louisville remarked, “As a man, I highly doubt he is in any way mad at her lol. She just gave him free publicity. He doesn’t have to use it, but all his female friends and co-workers know the truth.”

It was definitely the naked truth — the cold….well, the truth.

“Omg please let that not be her husband.”

“If she’s married it only gets worse if that isn’t her husband.”

“Ding ding ding! We have a winner!”

“He is either going to hide under a rock, or will become instantly in high demand.”

One tweeter apparently thought Mike had a cucumber soaked in vinegar:

“…the Brad Pitt of pickles!”

Let’s hope it was Mike.

The silhouette is believed to be that of Meza’s husband…

The pair have been married since 2004.

You can view the unedited shot here.

Now more than ever, news is a competitive business. And if you want ratings, you’ve gotta dangle a carrot for viewers. But I think it’s safe to say Mike and Melinda making headlines was completely — and terribly — accidental.

Let it be a reminder to outlets everywhere: Don’t make the same mistake they made in Sackramento.

Hilarious: Viral Video Captures a Groundhog Chowing on a Piece of Pizza – It’s the Quarantined Life We All Should Be Living