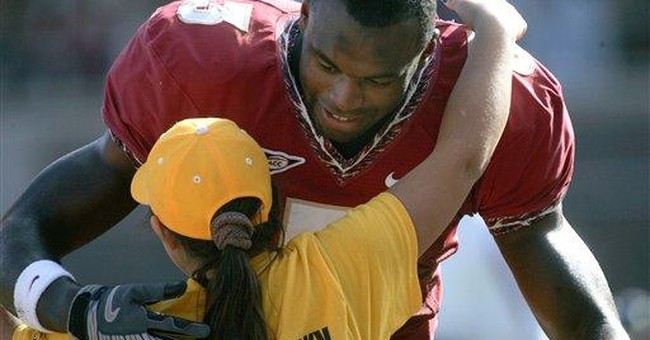 Florida State safety Myron Rolle reaches over to hug one of the children who won a health and fitness challenge at the Brighton Reservation School during half time of an NCAA college football game, Saturday, Oct. 25, 2008, in Tallahassee, Fla. He might not be the best football player in the country, but he’s certainly among the smartest. Florida State’s Myron Rolle will interview Saturday for a Rhodes Scholarship, just hours before the Seminoles play a key game against Maryland. (AP Photo/Phil Coale)

Then a few years later, you’re at Massachusetts General Hospital with a bad case of COVID-19. You look up at your attending physician, and it’s Myron.

Amazingly, it could happen.

The former NFL player left sports for the medical field, and now he’s a neurosurgery resident in Beantown — at the largest teaching hospital of Harvard Medical School.

Coming off a 24hr shift. Our hospital has enacted a mandatory “mask on” at all times policy. Future already told us to keep our “mask on” and give out prescription pills when indicated lol. For real though..stay safe, everyone. Do your part. #2% #RepTheSetGottaRepTheSet #FlattenTheCurve

As reported by People magazine, Rolle recently spoke to ESPN on video about saving coronavirus patients among a frenetic pandemic.

He explained that the hospital’s been reorganized in order to handle the heavy load of patients:

“Our neurosurgical floor has been transformed into a floor just full of COVID-19 patients. It is hectic, that’s for sure.”

“I was seeing so many individuals with respiratory distress and respiratory compromise, and the numbers are staggering.”

The demand is such that they may give up operating space:

“Our bed space, our operating rooms may even be turned into ICUs because there are so many people that are either positive with COVID-19 or suspected of having it.”

As for masks, they’re being reallocated as needed:

Pointing to an empty shelf, he noted, “So here’s, typically, where our masks would be for surgery. But because they’re needed elsewhere, there are no masks right now.”

But as he indicated on Instagram, at Mass General, covering oneself is a way of life:

“Coming off a 24hr shift. Our hospital has enacted a mandatory ‘mask on’ at all times policy. Future already told us to keep our ‘mask on’ and give out prescription pills when indicated lol. For real though..stay safe, everyone. Do your part.”

In case you’re wondering how a guy goes from suiting up and knocking people down on the gridiron to suiting up to save lives at the hospital, Myron — who was picked up in the sixth round of 2010’s NFL draft — left Nashville’s Nissan Stadium three years later to enroll in medical school. His mission: to become a brain surgeon.

From potentially causing head injuries, to healing them.

But it wasn’t that unpredictable of a move.

Before football, he was a Rhodes Scholar pursuing a Master’s degree in medical anthropology at Oxford University.

Rolle’s path to the NFL was unprecedented. He graduated from Florida State in just 2.5 years, then postponed playing professional football while he studied at Oxford University. When he returned, there were questions of whether he was more committed to football or being an academic, which some believe hurt his draft stock.

Well, we’re glad to have him on the front lines today, battling away.

As he expressed to ESPN, the former athlete’s applied what he learned in professional sports to his doctoring duties:

“Football has never left me. I still wake up in the morning and think of the operating room like a game. Like it’s showtime — let’s perform. I gotta do what I gotta do because people are counting on us right now.”

He’s one of so many changing the world right now.

“This is our time to help very sick people,” he said. “And so that motivation continues to drive me every single day.”

Thank you to Myron, and to all those who are serving in our hospitals amid this pandemic.