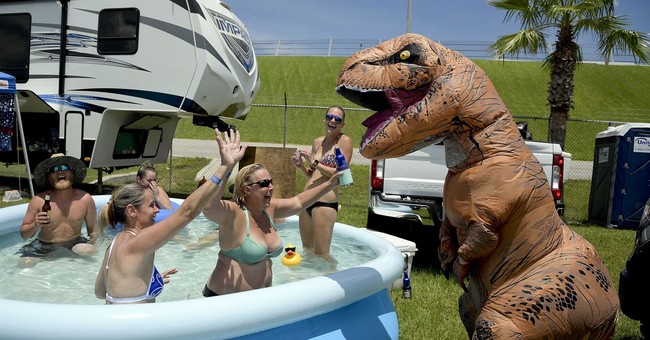 I’m sure you were all waiting for it.

In Spain, police have urged people to stay indoors in light of the COVID-19 state of emergency.

As reported by Newsweek, Prime Minister Pedro imposed a 15-day restriction on movement aside from travel for work, food, medicine, or caregiving.

Another exception: Pets can be taken for short walks.

It appears a savvy citizen was game to utilize the animal exemption.

I give you the mid-pandemic stroll of a T-Rex:

Even dinosaurs need to take out the trash.

And personally, I feel sorry for the big guy — if you think about it, who’d be more frightened of an extinction-level event than a Tyrannosaurus?

He probably can’t even sleep at night, saying to his theropod wife at 3 a.m., “This is it, Edna. I just know it.”

But as seen above, the police aren’t in an empathetic mood.

“During state of alarm, walking of pets is allowed if accompanied by one person, always short walks so they can relieve themselves. Having a Tyrannosaurus rex is not covered. #stayathome.”

Prime Minister Sánchez would likely likewise be unimpressed by the reptile’s rambling.

He tweeted the following Monday:

“Remember that you can go outside during the ESSENTIAL TIME so that our pet meets his needs and do not forget to collect their droppings. Do not use your pet as an excuse to break the rules.”

The PM’s particularly close to the illness — literally.

The country’s on lockdown:

Sports and arts events have all been suspended, as have schools.

Nevertheless, while announcing a state of alarm at a conference Friday, the Prime Minister said the country will make it through:

“We will overcome this emergency by relying on advice from science and with support from all of the resources of the state. But it is also undeniable that we will manage it sooner, and with the least human, economic and social damage possible if we do it together.”

I’m sure that will comfort a certain ancient short-armed creature in the city of Murcia.

Man Punches Cop in the Face, Doesn’t Realize the Officer’s Partner is a German Shepherd. He’ll Be Lucky if the Dog Ever Lets Go