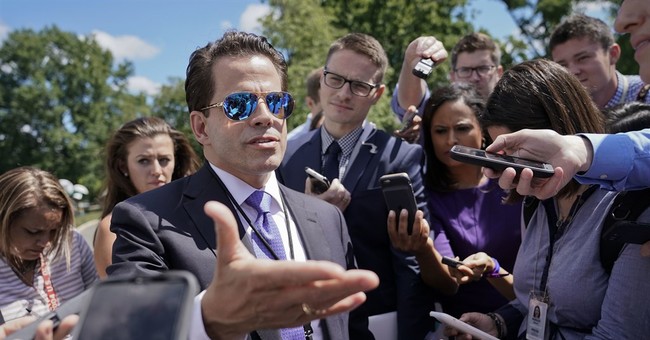 He only has himself to blame.

He overestimated his own value to the Trump camp, shot off his mouth – to a reporter, no less – and then balked when told he’d have to answer to the new chief of staff, John Kelly.

It really was a swift ending to what looked to be a gold mine for late night comedians.

They can take heart, however. He’s not just going away.

No, instead of taking time with the family he neglected, in order to act like President Trump’s shadow, he’s still on social media, sulking over losing his grip on that brass ring, and blaming the reporter who put him on blast, the New Yorker’s Ryan Lizza.

In fact, he’s comparing Lizza to another teller of secrets – Linda Tripp.

.@RyanLizza is the Linda Tripp of 2017. People know. And he is up at night not being able to live with himself.

Yeah. I doubt Lizza is losing any sleep over your emotional breakdown, Mooch.

And for anybody who needs a reminder, it was Linda Tripp who befriended Monica Lewinsky when they both worked in the Pentagon public affairs office in the mid-90s, then taped conversations between she and Lewinsky, as Lewinsky revealed details of her affair with President Bill Clinton.

Tripp even convinced Lewinsky not to wash the blue dress.

Yes. He absolutely taped the call without my permission. #lowlife https://t.co/fTDcBw4vcT

Keep fuming, Mooch. Wallow in it, as a matter of fact.

And while I’m thinking of it, if Ryan Lizza is Linda Tripp, would that make you Monica Lewinsky?

We all await your blue dress moment, Mooch.

Let Them Drink Margaritas: Here’s What Psaki Said to Americans Who Are Angry About the State of the Country
Townhall
Nick Searcy calls out Texas Dem Gene Wu for his thread on Meat Loaf's death and vaccinations
Twitchy
Aaron Rodgers Goes There on Joe Biden in Shocking Interview
Redstate
WATCH: Matt Walsh Destroys Woke Gender Narrative With One Simple Question
PJ Media