The opinions expressed by contributors are their own and do not necessarily represent the views of RedState.com.

The Republican-controlled Iowa House of Representatives is getting down to the brass-tack stage of perfecting that state. A bill making its way through that legislative body will limit the foods purchased using the U.S. Department of Agriculture Supplemental Nutrition Assistance Program (SNAP) to the foods authorized under the Women, Infants, and Children (WIC) supplemental food program. This is because the diets of a family with kids in school are exactly the same as that of expectant mothers and infants. If this were all the bill did, it would merely be stupid and abusive. The idea that you can’t buy fresh meats but can buy canned meat makes no sense economically or nutritionally. But that is not all the bill does.

But SNAP users would no longer be able to purchase with the aid many other foods, including meat, poultry, fish, canned fruits and vegetables and items commonly used in food preparation like butter, flour, spices and seasonings, sugar, and vegetable oil, and ketchup, mustard, mayonnaise and other condiments.

According to House Speaker Pat Grassley (hmmm…Grassley…but, as they say, it’s not nepotism if it’s your nep):

“Our goal is not just to eliminate swaths of things,” Grassley said in response to a question about cutting meat and other categories of food out of the SNAP program. “But I think there needs to be some level of accountability, and make sure that they’re really things that should qualify. If you don’t lead a healthy lifestyle, that leads to more use of the (government-funded) services.”

This is the worst kind of state-directed nannyism. It is the same mentality that made you take a COVID shot and provide documentation before you could use a restaurant. It is the same type of hunger to control other people that made it okay to attend a BLM riot while closing churches.

Some people think this is fine because it seems that people who are down on their luck should be made as miserable as hell. As an example, this is from a fairly prominent conservative.

For years when we were young struggling parents who worked for a living I remember going to the store with my $30 for the week and buying beans and rice. I would almost always find myself in line behind someone buying ribs, steak, chicken, and shrimp with food stamps.

I’m not even mad about it. Those people will never get to feel the profound gratefulness I felt once we could finally afford fresh meat. To them, it’s always been an entitlement.

I’d just offer that your decision to forego SNAP out of principle is your decision; not everyone is bound by it or even respects it. This could easily be flipped to question why someone would restrict their family’s diet as an exercise in virtue signaling. I’d also hardly consider buying chicken or ribs as living in the lap of luxury.

I’d be the last to say there isn’t abuse of SNAP, but the majority of people on SNAP are working; it’s just that their jobs don’t move them above the eligibility threshold. 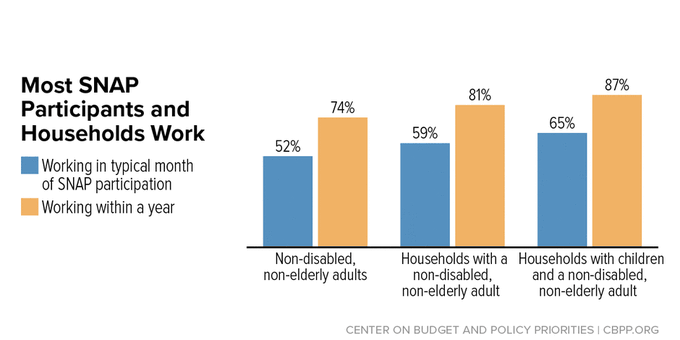 In my view, this is stupid policy and stupid politics. If you want to reduce the outlays for SNAP as a cost-saving measure, then reduce the entitlement. There is nothing fiscally prudent or politically conservative about telling people using SNAP why they can buy bread and not buy the ingredients to bake biscuits. No purpose is served by inflicting whole wheat pasta on anyone but Gitmo residents. It is sheer stupidity to force people onto a diet high in processed foods while forbidding the purchase of fresh meat and then appealing to a “healthy lifestyle.” Speaker Grassley’s argument that this bill will help save money is just mendacious bullsh**. The state treasury can’t tell the difference between me buying a pound of hamburger and a pound of crap, mass-produced, preservative-laden bread. More importantly, it shouldn’t care.

This is the kind of legislation that, rightfully, gets conservatives labeled as hypocrites when we talk about liberty and personal responsibility and wanting to help the poor. It is what makes the argument that conservatives are pro-life up until the moment of birth so powerful. It is petty and meanspirited and does nothing but give some people a temporary rush by f***ing with people just because they can.

Years ago, back when Saturday Night Live was funny, there was a short skit by Peyton Manning titled “Mentor.” The setup is that a high-strung, hyper-competitive Peyton Manning mentors an after-school group with predictable results. At one point, he confronts a kid who isn’t measuring up, “What’s wrong with you, do you like to lose?”

This is where the Iowa House, and Ronna McDaniel’s RNC, have shouted, “Yes! We love to lose because we are losers!”

What Grassley and his cohorts are up to will do nothing to save money. It won’t even make poor people live a healthier lifestyle. What it will do is remind anyone who ever had a run of bad luck, and their friends and relatives, that the Iowa GOP had nothing better to do than enact a stupid, vengeful bill to punish people who happen to need assistance to buy food.