Two days ago, Fox News personality Tucker Carlson used his opening monologue to announce that he had been targeted for surveillance by some part of the US Intelligence Community. The ostensible purpose of this surveillance was to force the cancellation of his show. Here is that segment.

It’s not just political protesters the government is spying on, yesterday, we heard from a whistleblower within the US government who reached out to warn us that the NSA, the National Security Agency, is monitoring our electronic communications and is planning to leak them in an attempt to take this show off the air.

Now, that’s a shocking claim and ordinarily would be skeptical of it. It’s illegal for the NSA to spy on American citizens. It’s a crime. It’s not a third-world country. Things like that should not happen in America. But unfortunately, they do happen, and in this case, they did happen. The whistleblower who is in a position to know repeated back to us information about a story that we are working on that could have only come directly from my texts and emails. There’s no other possible source for that information, period.

My RedState colleague shipwreckedcrew covered the story (REPORT: Whistleblower Told Tucker Carlson Biden Admin’s IC is Illegally Monitoring His Electronic Communications). I followed that with Tucker Carlson’s Spying Claim Matches What We Know About an out of Control Intelligence Community.

To me, the facts all point towards Carlson being truthful. He is the only media figure giving serious pushback to the Biden bunch on their conduct and policy. He has been particularly tough on this bunch pushing Critical Race Theory and on the abject failure of Biden’s border security plan. Carlson has nothing to gain and a great deal to lose by making a false accusation. Plus, there is nothing he is alleging that was not done by the Obama administration to the Trump campaign and transition team.

The NSA denied it.

A statement from NSA regarding recent allegations: pic.twitter.com/vduE6l6YWg

Dhillon enumerated how intelligence agencies can spy on Americans, and the online reaction again convinced me that Carlson’s complaint is legit.

Let’s start with the NSA answer.

One thing I learned in my time in the federal government is that the longer and more specific the answer, the greater the chance you are being lied to. Let me give you an example. In the aftermath of Operation JUST CAUSE (or just ’cause as it was known by cynics), the commander of XVIII Airborne Corps, General Carl Stiner, gave an interview in which he claimed, “without evidence” as the press was so fond of describing every utterance by President Trump, that the invasion was compromised.

Stiner said that word of the impending invasion leaked out at least three hours before H-hour, 1 a.m. on Dec. 22. He said the Army was investigating three possible sources of the leak:

— A State Department official called a friend who worked for the Panama Canal Commission, saying that the invasion was set for that evening, and warned him to “get your kids off the street.” It is not known whether the warning then circulated.

— The National Security Agency, which handles all communications intercepts, detected a high-speed “burst broadcast” from Cuba to Nicaragua several hours before the U.S. troops landed in Panama. Officials are still trying to decipher the message.

— Broadcasts on American television at 10 p.m. the evening of the invasion said that the 82nd Airborne Division had left Fort Bragg and was headed for Panama.

The fact is that Stiner was right, but on the most explosive allegation, that a State Department official called a friend on the Panama Canal Commission, he muffed a detail. I was working in the Army Ops Center at the time. I, personally, read a copy of the intercept summary from NSA. The real story was someone in State called a friend on a business trip in Panama and gave him a warning along the lines of “they are coming tonight, don’t tell anyone.” The contact in Panama immediately called his closest associates. They called. etc., etc. Needless to say, Stiner blowing NSA capabilities energized some hair follicles in The Building. Some of us were waiting for the Pentagon news briefing the next day to see how Pete Williams, now of NBC but at the time he was Assistant Secretary of Defense for Public Affairs, was going to handle it. I was amazed. Reporters knocked themselves out trying to pin Williams down on various permutations of the story but as none of them guessed correctly what happened, he, with a straight face, denied them all. If anyone had asked the macro question, that is, did anyone in the US call anyone in Panama and alert them to the invasion, I suspect Williams would have fibbed, but at least he would have had to work. I tried to find the video of that presser, but all I have is this:

In one of the most puzzling corrections issued by the Pentagon in some time, chief spokesman Pete Williams last week released a statement saying that the front-line commander of the Panama invasion, Lt. Gen. Carl W. Stiner, was wrong in just about everything he said to reporters about how leaks had “compromised’ the operation.

Pentagon officials were besieged with news media inquiries, and Williams, on March 6, issued a statement that said:

“To our knowledge, there was no radio transmission from Cuba to Panama containing data that might have tipped off the PDF (Panama Defense Forces). There was no intercepted telephone call between any State Department official and a friend at the Panama Canal Commission. And there is no evidence that Panamanian military radio channels carried a warning that, ‘They’re coming,’ or ‘The ball game is at 1 a.m.’ ‘

Williams’s statement went on to say that Stiner had forewarned reporters that he “had no direct knowledge of any U.S. government tip-offs which may have compromised the operation.’

The NSA statement reminded me of that incident. Too much emphasis was placed on denying specific things, like trying to have Carlson taken off the air, rather than simply saying, “this did not happen. This is what the NSA response looks like when marked up by lawyers (courtesy of our sister publication, Townhall, see Katie Pavelich’s Attorneys Pick Apart NSA Statement About Tucker Carlson). 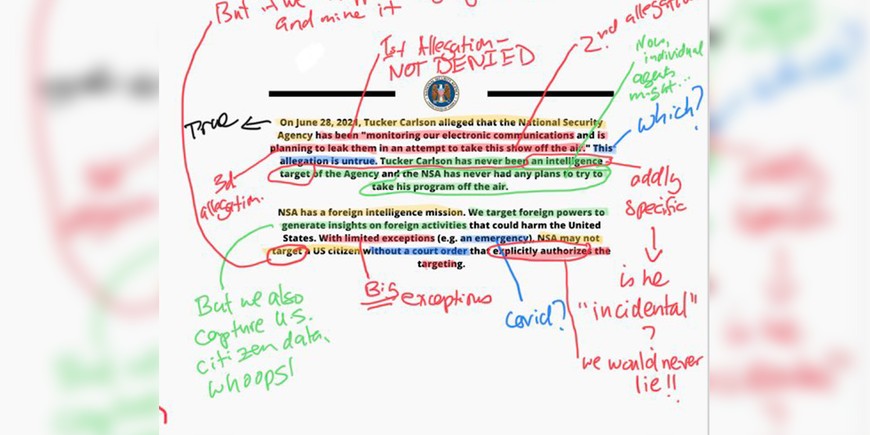 The bottom line here is that NSA denies “targeting” Carlson. That is caveated so that you are left with the impression there is much, much more to the story. What is not ruled out is an operation that is being run off books…I know, I know, the NSA would never lie to us…or that an NSA contractor is working under the guise of some bullsh** “white nationlist,” “domestic violent extremist” investigation is targeting him. We know that the official rules of the NSA don’t give one a lot of confidence:

At least a dozen U.S. National Security Agency employees have been caught using secret government surveillance tools to spy on the emails or phone calls of their current or former spouses and lovers in the past decade, according to the intelligence agency’s internal watchdog.

Kevin McCarthy has directed Devin Nunes to get to the bottom of this, but this is just theater. Nunes doesn’t have subpoena power and will just be ignored.