Dr. Fauci Decides He Is Galactic Commander and Warns That Protests Will Delay Reopening the Country 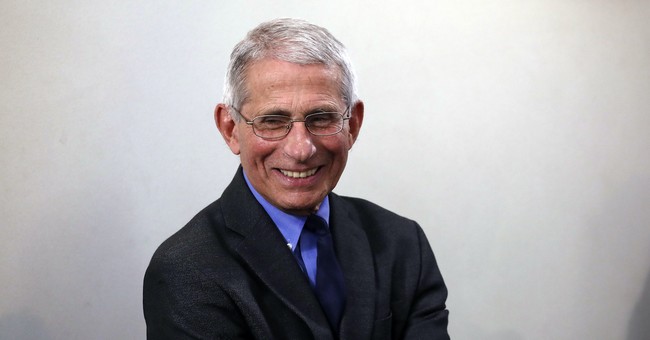 Dr. Anthony Fauci, director of the National Institute of Allergy and Infectious Diseases, stands before President Donald Trump arrives to speak about the coronavirus in the James Brady Press Briefing Room at the White House, Monday, April 13, 2020, in Washington. (AP Photo/Alex Brandon)

The advent of the Wuhan virus pandemic has the potential to mark a sea change in our relationship with government. Never before have we seen black letter Constitutional rights, not mere emanations and penumbras, violated on such a magnificent and heroic scale as we have experienced in the past two months. Never before has our government tried to force us to remain in our homes, told us what we can and cannot buy, and even told us what we must wear if we go into public. What was not forced upon us by two world wars, the Great Depression, and the Carter administration is now being foisted upon us as vital to our health and safety for fear of a virus.

For once, the driving force behind this nonsense is not elected officials impelled by circumstances to make tough decisions…like suspending Habeas Corpus. This time, the decisions are being made by public health gurus and deranged mathematical model developers working hand-in-hand with a media that is perfectly willing to burn the US economy to the ground to destroy President Trump to stampede people who should and probably do know better into imposing illegal policies that do little-to-nothing to make us safer and a great deal to curtail our freedom both now and in the future.

This morning, Dr. Anthony Fauci of the National Institute for Allergies and Infectious Diseases was interviewed by aging Clinton muppet, George Stephanopoulos, on Good Morning America. He’s asked about the protests.

Fauci has a distinguished history of being a reasonable voice on public health crises, I’m just not sure that the current sh**show is his finest hour. The ‘guidelines’ issued by the federal government last week are just that. Guidelines. And they are guidelines for exactly as long as, to use the Tea Party vernacular, “We, the People,” decide they make sense, that the trade-offs are reasonable, and the damage done to the nation by the cure is not orders of magnitude greater than the disease.

The fact is, that there is no evidence, outside of the bullsh** being slung about in New York, that Wuhan virus is a problem. When one state has half of the nation’s fatalities, then you are left with one of three explanations: New York’s medical system more closely resembles something you’d expect to find in a rural area of Outer Mongolia than in the United States; New Yorkers are just very weak and disease-prone and die like flies; or, New York is juicing their death totals to try to get the federal government to underwrite the $6 billion-and-growing hole in the state’s budget.

There will be no ‘backfire’ to opening the country because the only ‘fire’ of any kind was inflicted upon us by people like Dr. Fauci, who have no actual skin in the game, using models by Imperial College and IMHE cranks who, likewise, can shut down the economy for sh**s and grins. Protests will only delay reopening the country if the citizens of this country, not unelected bureaucrats, decide that is the case.

Fauci has rendered his best advice, advice that has changed from ‘meh, no biggie’ to ‘Armageddon!!!’ in the space of 60 days. That is the end of his role. He has no role to play in making the decision on when and how the country reopens because that is a decision that is made by people we elect and people we have the right to petition for ‘a redress of grievances.’ Likewise, governors and the people are not bound by guidelines that seem more focused on aggrandizing power to public health bureaucrats than to actually protecting the health and well-being of Americans.

The time has passed for us to meekly go along with people who really aren’t, knowingly or otherwise, placing the best interests of the nation at the top of their list of priorities.