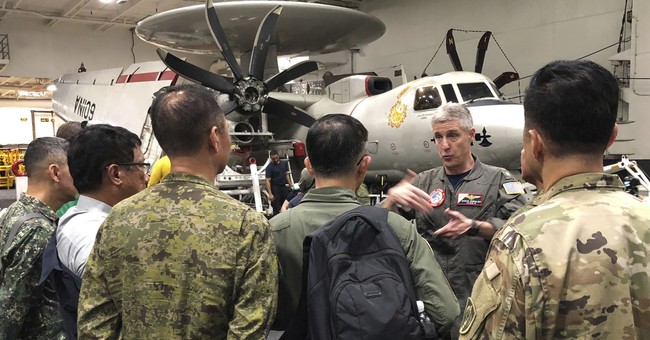 A lot of the current state of affairs brought on by the Wuhan virus pandemic is driven by models that have been shown to be wildly inaccurate. The models, such as they are, are driven by assumptions made by the modelers…in some cases, like the Imperial College study that kicked off this hysteria, the modelers refuse to let anyone see their assumptions or their model calling into question whether it even exists…which seem to be more closely akin to wild-assed guesses than sober estimates. How, then, do we know what to believe about the virus?

On April 2, Navy Secretary Thomas Modly relieved the commander of the USS Theodore Roosevelt from command. Coming from a generation of Army officers where readiness ratings were actually classified and talking about your vehicle deadline rate to the media would get you shown the door, I found the extraordinary lack of judgment exhibited by the Roosevelt’s commander to be little short of stunning. Right now, the Roosevelt is essentially a ghost ship and, thanks to her captain, everyone knows it. Still, the Roosevelt, as a basically closed system, provides us with a lot of useful data points.

The official story is that the Roosevelt was on a port call to Da Nang, Vietnam, from March 4 to March 9. Some sailors stayed at a hotel where other guests had contracted Wuhan virus. The sailors displayed some superficial symptoms of the disease, they were tested and cleared. On March 22, the first sailor tested positive. On March 24, three members of a flight crew assigned to the Roosevelt tested positive. Right now, the working assumption is that the virus came aboard ship via the air wing.

Navy Surgeon General now appears to be walking this back: "I do not personally have knowledge about the initial individuals." https://t.co/xB5ZcWXKdv

To be clear, the two first positive cases of on USS Theodore Roosevelt were sailors assigned to Carrier Air Wing 11. The third was in ship's company. I think I said aircrew before and could be misleading. HOWEVER, Navy officials (2) say they may not be the first infected.

Wouldn't be the first time the airwing brought something back from the Philippines to infect the crew with.

From the timeline and what we know about the disease so far, the first sailor infected probably encountered the virus no later than March 17 and no earlier than March 8 with the later date having a higher likelihood.

Based on recent reports, we know that at least 94% of the ship’s complement of more than 6,000 sailors has been tested. As of yesterday, 655 had tested positive. Six were hospitalized, one of whom was in intensive care and has since died.
.
We don’t know what the Roosevelt’s captain did after the first cases were confirmed, other than change into his brown trousers, but what we do know is that ‘social distancing’ was literally not possible until the ship docked in Guam on March 27; at that time, about 100 sailors tested positive for the virus.

The most interesting fact is that over 60% of the sailors who tested positive show absolutely no symptoms of the disease.

Here is what it shows.

The Roosevelt was a closed system where the presence of 6,000 people on the ship and the necessity of carrying on at-sea operations meant that retreating to the fainting couch and binge-watching Netflix was not an option. From the time the virus probably came aboard until the vessel docked in Guam, 13 days elapsed. At the end of 13 days, about 100 sailors were showing sufficient symptoms to warrant testing. Now, two weeks after quarantine went into effect, and mandatory testing implemented, we know that 655, or about 10% of the Roosevelt’s crew carried the virus. Less than 1% of those with the virus (6) required hospitalization.

I won’t pretend to be an authority on R0 but the rate of transmission was nothing near an exponential one, in fact, it was barely arithmetic. In the time elapsed between the introduction of the virus and the first man testing positive, there were at least five days in which some 6,000 odds and sods on the USS Theodore Roosevelt lived and worked and socialized in very close quarters with no options to avoid personal contact…they probably didn’t even wear face masks to go about their work. From this experiment, we know that Wuhan is nowhere nearly as virulent as many of the alleged models have told us.

The fact that less than one percent of people infected required hospitalization explains both why certain governors were howling for the Army Corps of Engineers to build them brand new hospitals, and why the hospital facilities deployed to those states returned basically unused.

Also of note is that under a mandatory testing regime, some 60% of the population infected showed no symptoms. We don’t know what percentage of the 40% had symptoms that were so mild that they would never have bothered to seek medical care. If that number is extrapolated to the United States, it means that millions and millions of people have been infected and recovered without even knowing it.

The story of the Roosevelt and the Wuhan virus is much bigger than one Navy captain with a rather bloated sense of self-importance. It shows us that the virus is not as virulent as we’ve been led to believe. It shows that in a population that is relatively healthy (we don’t know anything about the health history of the only fatality, 41-year-old Chief Petty Officer Charles Robert Thacker Jr.) the number of people requiring hospitalization is very small. Rather than use bullsh** models to drive public policy, we should consider using actual facts.

Note: I’ve received multiple emails informing me that while the ship’s company of the Roosevelt is about 4,800, when afloat, there are nearly 2,000 additional personnel assigned to the carrier air group on board so the count on Roosevelt was over 6,000.

Actually, There Was a 'Red Wave' in the 2022 Midterm Election
The Heartland Institute