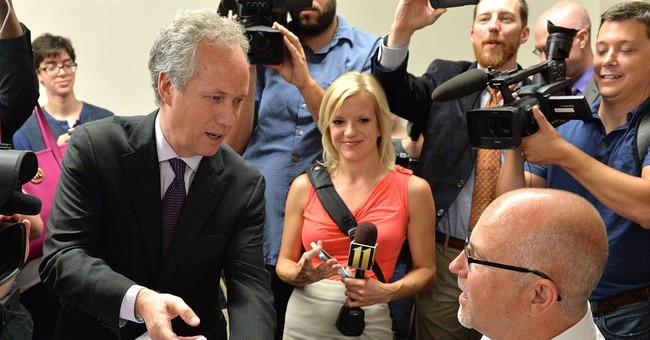 Louisville Mayor Greg Fischer left, hands Larry Ysunza a bottle of champagne after he and his partner Tim Love became the first same sex couple in Jefferson County to receive their marriage license at the Jefferson County Court House Friday, June 26, 2015, in Louisville, Ky. The U.S. Supreme Court on Friday ruled that there is a right to same-sex marriage in all 50 states across the country. (AP Photo/Timothy D. Easley)

Yesterday, I posted on the extent to which state ‘shelter-in-place orders’ (seriously, f*** these people, I decide when I shelter-in-place, no one else) have gone out of their way to target churches and synagogues during Holy Week-Easter-Passover. A couple of the most egregious examples come from Kentucky (by the way, all you dumbasses who danced to the teachers’ union tune and voted against Matt Bevins, I hope you’re happy). The fascist Democrat Governor Andy Beshear has ordered the highway patrol to take down license plates numbers at Easter services, track down the drivers, and place them under a 14-day quarantine. In Louisville, fascist Democrat mayor Greg Fischer has forbidden even “drive through” services. Neither of these orders makes any sense in any epidemiological way. People in cars don’t pass a virus to other people in cars. It just doesn’t work that way. The only plausible reasoning is simple hostility to religion.

The On Fire Christian Center in Louisville went to court to fight this grotesque overreach of power and a federal district judge, Justin Walker, handed down a temporary restraining order blocking Commissar Fischer from carrying out his order outlawing Easter services.

A federal judge has granted a restraining order against @louisvillemayor who promised to record the license plates of Easter church goers.

“The Mayor’s decision is stunning,” Judge Justin Walker said, “And it is,’beyond all reason,’ unconstitutional.”https://t.co/R4b6UqgisC

The decision is correct in all respects, right to the point of noting that if drive-up beer is an essential service, then so is drive-up Easter.

As you might expect, there are folks interested in using Wuhan virus as a bludgeon to Americans into accepting their status as serfs rather than citizens with actual God-given rights.

Trump judge Justin Walker holds that churches have a right to gather for drive-in services so long as parishioners remain in their cars.

On the merits, I think that is correct, but the opinion is so partisan and over-the-top it discredits itself.https://t.co/OMRKn2Nmg5

Terrifying. Read the start of this opinion by one of Trump’s nominees rated “unqualified” by the American Bar Association. Justin Walker. A week ago, Trump indicated his intent to nominate him for the DC Court of Appeals. The second most consequential court short of SCOTUS. https://t.co/0kQyI8q9O2

And then there are the Virtue Signalers:

The rhetorical flourishes in this opinion do not inspire confidence even if the decision is correct. https://t.co/BJwj6YjNUe

We need a lot more of this and we need a significant level of civil disobedience of these idiot restrictions of liberty by fiat. It is shameful that only one church in Louisville attempted to go to court to enforce black letter Constitutional law.

Expect to hear a lot more about this decision. Walker has been nominated for a seat on the DC Circuit.