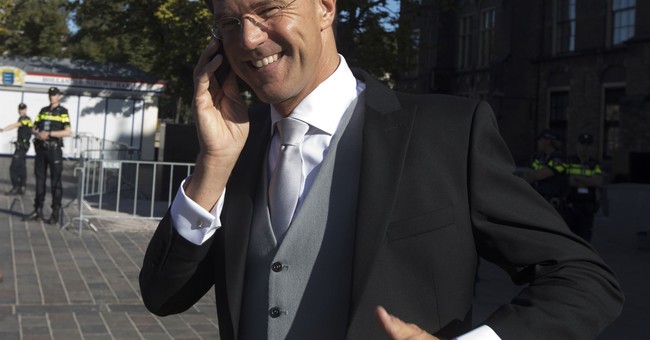 Dutch Prime Minister Mark Rutte flashes a thumbs up as he talks on in his phone in The Hague, Netherlands, Tuesday, Sept. 18, 2018, prior to a ceremony marking the opening of the parliamentary year with a speech by King Willem-Alexander outlining the government’s budget plans for the year ahead. (AP Photo/Peter Dejong)

Today, President Trump encouraged the country to come to a screeching halt for a couple of weeks to combat the spread of Wuhan virus. I have a lot of doubts that this will work–our neighbors to the north are still accepting flights from China–or can work. Wuhan virus is a part of our ecosystem. It, like influenza, will be something we just have to deal with until the end of time. The gamble is that this initial burst of the pandemic burns itself out, aided by increasing temperatures and humidity, before the economy craters. If we gamble wrong and Wuhan virus surges back after the informal lockdown periods cease, then all we’ve done in the long term is nothing. The flip side of the coin is that people who survive Wuhan…and here I’m talking about virtually everyone who gets it, are left with some degree of immunity but people who got through it by self-quarantine will be just as vulnerable 4 or 5 weeks or 4 or 5  months from now as they are today.

The other strategy available is to say f*** it, we can’t stamp this out, it’s going to be with us perpetually, let’s let it run its course, try to isolate the highest risk citizens, and rely upon what is known as herd immunity for protection. Herd immunity is defined by the CDC as “a situation in which a sufficient proportion of a population is immune to an infectious disease (through vaccination and/or prior illness) to make its spread from person to person unlikely.” That is what childhood vaccinations try to accomplish. If you can vaccinate 80% of the population, then the ability of a disease to spread approaches zero. That’s because most of the population can’t carry the disease and that protects the part of the population that cannot or will not vaccinate.

This latter strategy has been selected by the Netherlands.

In a rather historical speech, the first national address by a prime minister since the 1970s, Dutch Prime Minister Mark Rutte addressed the country on live TV from The Hague.

The prime minister started his speech by giving his condolences to the families of the people who have died of Covid-19 and acknowledging the concerns of the Dutch people. “Tonight, my message is a difficult one. The coronavirus is here to stay. There is no quick escape out of this situation. A large part of the population will get infected by the virus.”

In his speech, Rutte mentioned that there were three possible scenarios:

The Dutch government has chosen to go with the first scenario, to limit the spread of the virus as much as possible. However, the prime minister also stated that there is always a possibility that extra measures will be taken if the experts deem it necessary.

Last week, it seemed like the British government was also about to choose herd immunity but after a high profile article published to that imagined a death toll as high as 250,000, the government changed course.

No one knows how this will play out. Will the Dutch be considered prescient or buffoons? Will the aggregate death toll in the country go up? Or will deaths from Wuhan virus consist of elderly, sick, and immune-compromised people who would have died of influenza or pneumonia or some other infection? What I do think we know is this: The self-quarantine/lockdown regime we’re trying is a very expensive band-aid. The disease is here to stay and the real challenge is not how we manage this outbreak but how we manage to live with it. With herd immunity, or with a widely available vaccine, it is manageable. What we don’t know, and won’t know for many months, is if a vaccine for Wuhan virus is even practicable. Will it be like measles or whooping cough? Or will it be moving target like influenza? Or will it be like AIDS and the common cold and be totally resistant to efforts to develop a vaccine? If it is the first situation, then we may have the luxury of snickering at the Dutch and their fatalism. If it is the latter scenario, we have spent months in panic and billions of dollars in lost productivity and next winter we’ll have to do what the Dutch did.