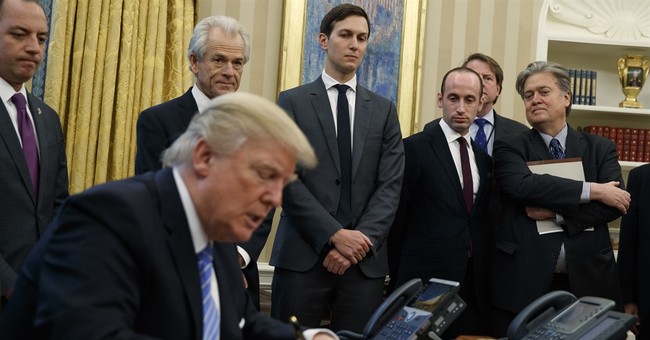 Last night, the President imposed a moratorium on flights to and from the European Union in response to the growing number of Wuhan virus cases reported there. This is a bookend, perhaps belated, to the prescient ban on travel to and from Communist China that was imposed shortly after the Chinese government lost control of the information flow about the epidemic and undoubtedly bought the US significant time to study and prepare for its appearance here. (BTW, as I’m not on the editorial board of National Review and I don’t make a living fluffing for Pierre Omidyar, I’ve not declared the national response a failure when we have a total of ten people in serious or critical condition from Wuhan virus in the entire nation.)

Waiting in the wings, though, is a more important measure. President Trump is poised to sign an executive order that will require federal agencies to purchase all pharmaceuticals and medical items from domestic sources.

The administration has been preparing an executive order, which could be released in the coming days, that would close loopholes allowing the government to purchase pharmaceuticals, face masks, ventilators and other medical products from foreign countries. The hope is that increasing government demand for American-made drugs and medical products will provide an incentive for companies to make their products in the United States, rather than China.

To help facilitate such production, the White House is also pushing for streamlined regulatory approvals for American-made products and more detailed labeling of the origin of products made offshore, these people said.

A watchdog report last month by the U.S.-China Economic and Security Review Commission and a recent congressional hearing warn that China hopes of surpassing the United States as the world’s biggest producer of pharmaceutical products.

As much as 80% of the world’s production of face masks and surgical gowns lies in China.

It is a mistake to think this dominance is benign.

“China has managed to dominate all aspects of the supply chain using the same unfair trade practices that it has used to dominate other sectors — cheap sweatshop labor, lax environmental regulations and massive government subsidies,” Mr. Navarro said in an interview. “As President Trump has said, what we need to do is bring those jobs home so that we can protect the public health and the economic and national security of the country.”

This, like all Chinese economic activity has to be seen through the lens of a long term strategic plan to position China as an indispensable part of the world’s economy and use that economic power to gain diplomatic advantage without having to resort to force.

What the Wuhan virus pandemic has demonstrated is that China is a rogue state, an unreliable actor in international affairs and a rapacious trading partner. Earlier in the week, the official mouthpiece of the Chinese Communist party, Xinhua News Agency, said that China might impose an embargo on pharmaceutical and medical supply exports to the United States if we continued to highlight China’s central role in turning this disease into a worldwide epidemic.

If the Trump is bloody minded enough about carrying out this executive order, and Navarro just might be, then it signals a sea change in this particular market segment. While federal agencies, themselves, purchase a smallish amount of these items, those agencies have the ability to place those terms and conditions in all contracts and grants funded by federal dollars. This literally means that eventually university biomedical research programs receiving federal grants, Medicare and Medicaid and the Veterans Administration and Tricare could be barred from purchasing Chinese products. Down the supply chain, this would mean pharmacies who want to do business with those entities would have to ensure their suppliers are not Chinese.

The Wuhan virus epidemic is just one of many events that has transformed me from a committed globalist on economic issues (this was during the Bush administration) to an economic nationalist. I’ve become convinced that free traders, particularly those of the libertarian variety, know the cost of everything and value of nothing. That they are perfectly willing to trade away our actual sovereignty in the demonstrable false hope that economic ties can modify the behavior of totalitarian regimes. Cheap consumer goods are fine and dandy but when the nation’s capacity to defend itself quite literally depends upon being supplied by the only nation in the world who is close to being a peer-competitor with us, you’ve plumbed the depths of stupidity.