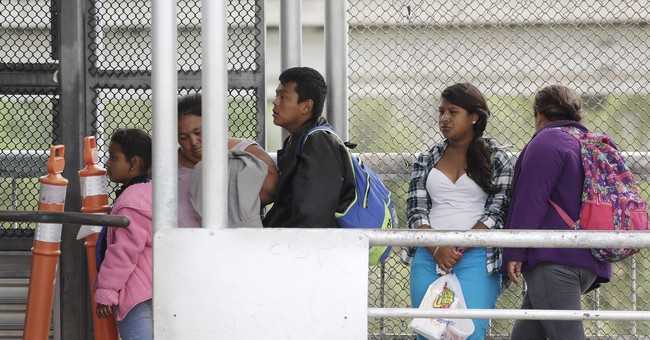 FILE- In this Saturday, Nov. 3, 2018, file photo immigrants seeking asylum in the United States wait on the the International Bridge in Reynosa, Mexico. Asylum seekers already camping at border crossings worry that how the Trump administration responds to the caravan of some 4,000 Central American migrants and three much smaller ones hundreds of miles behind it could leave them shut out. (AP Photo/Eric Gay, File)

Last week, the Ninth Circuit continued its program of LawFare and obstruction directed against the Trump administration in general and the enforcement of immigration laws in particular.

A year ago, the Department of Homeland Security instituted it Migrant Protection Protocols, or MPP. The overall purpose was to disincentivize human trafficking in illegal immigrants along our southern border. Thanks to policies instituted during the last couple of years of the Obama administration and the actions of a handful of federal judges who seem hellbent on ensuring that our immigration laws are impossible to enforce, we have seen the character of illegal immigrants along the border change from predominantly single Mexican adults to family units that are mostly not from Mexico but use Mexico as their staging point for their attempt to cross the border. When they are apprehended, because of court decisions, the family unit is released on parole within the United States and are on the honor system to show back up for their immigration hearing.

One feature of the program is that illegals of any nationality are returned to Mexico to await their court date:

Certain aliens attempting to enter the U.S. illegally or without documentation, including those who claim asylum, will no longer be released into the country, where they often fail to file an asylum application and/or disappear before an immigration judge can determine the merits of any claim.  Instead, these aliens will be given a “Notice to Appear” for their immigration court hearing and will be returned to Mexico until their hearing date.

While aliens await their hearings in Mexico, the Mexican government has made its own determination to provide such individuals the ability to stay in Mexico, under applicable protection based on the type of status given to them.

There has been a flurry of court action, as to be expected, but late yesterday the Ninth Circuit decided to impose an injunction barring the policy from being carried out.

A federal appeals court has decided to block the Trump administration’s “Remain in Mexico” plan in two states along the U.S. border, following back-and-forth rulings over the program.

In its order late Wednesday, the 9th Circuit Court of Appeals in San Francisco said that next week the administration will have to stop making asylum-seekers wait in Mexico for the U.S. to process their claims, but that the court ban applies only to areas in its jurisdiction, Arizona and California.

The decision comes less than a week after the appeals court briefly blocked the program, then quickly suspended that order.

On Wednesday, the court said it remains “very clear” that a lower court was correct in ruling that the Trump administration program — technically called the Migrant Protection Protocols, or MPP — may violate the law. “It is equally clear,” the court added, “that the MPP is causing extreme and irreversible harm to plaintiffs,” many of whom are asylum-seekers themselves.

In the current environment this has as much to do with illegals as a public health risk as it does with combating illegal immigration. Over the last two months well over 300 Chinese have been apprehended crossing into the US from Mexico. Where these illegals had to return to Mexico to await processing, now they will be released on parole into the interior of the United States. Wuhan virus has been detected in the Dominican Republic and Honduras. Given the public health capacity in those countries as well as Guatemala and El Salvador, we can anticipate that in a very short period of time a significant number of illegals will be carrying Wuhan virus.

The Trump administration immediately appealed to the Supreme Court and just a short while ago that court reversed the decision by the Obama judges on the Ninth Circuit and allowed the government to enforce the policy. Only one justice dissented, that would be the wise Latina, herself, Justice Sonia Sotomayor. The very fact that the injunction was removed despite that hyperbolic opinion authored by Judge William A. Fletcher signals that the Supreme Court will uphold the MPP when this case finally arrives in the Supreme Court.

The Elites Move to Save the Hedge Funders from Reddit, and People Have Thoughts
Bonchie

Quadruple Murderer Is NYT’s Profile in Courage
Townhall
'This is insane': Man charged with election interference over memes that fed 2016 voters disinformation, but this video's still up
Twitchy
NAILED IT: Ben Shapiro Comes Right Out and Says It About Biden: 'This Is Not Normal'
Redstate
Biden DHS Issues Domestic Terror Alert Warning of 'Objections' to 'Governmental Authority'
PJ Media