Redstate’s own ColdWarrior and Ron Robinson invited several precinct activists from around the country to sit on a panel at the recent RightOnline conference, put on by Americans for Prosperity. Our topic was the “Importance of Precinct Activism”. Below the fold you will find some more details that I didn’t include in my portion of the event, and get to see me talking.

Gordy Hulten is the former Illini Pundit (site now dark), former Congressional campaign manager, and a long-time Precinct Committeeman in Illinois.  When a vacancy opened for Champaign County Clerk, he was present at the meeting at which a successor was chosen. The reason he was at the meeting is that such replacements are typically handled at the County Executive Committee meeting of the party of the former incumbent. That is, the Precinct Committeemen decide who gets the office, and they often pick someone from their own ranks.

Gordy told me that after all the years of working on campaigns, even running them, he learned as never before how elections work when he became County Clerk.

Brian Milleville (Redstate’s anacreon) and Stephanie Rieman are tea party leaders in Effingham, Illinois. Both are PCs. Brian got elected to the City Council for on a shoestring budget, his greatest expense being shoe leather.

Your first job as a PC is to recruit a replacement

You are engaged in a multi-level qualification process, not a system of accepting or rejecting people. You are looking for assistants, candidates, conservatives, Republicans, and right-leaning moderates. You should also be identifying people who will always vote Democrat, but on single issues, like abortion or gun control, can be counted on as temporary allies.

Your main job is to recruit allies, both entire groups and individuals within the group.

Some local chapters of national groups are liberal, some are conservative. You have to identify which is which. That is why you, as the local person, are doing it.

A.k.a “gentleman’s agreement” or “combine”

The typical result is phone banking for GOTV, with an election eve “72 hour program” focused on swing areas.

What Is Wrong With Victory?

Voters age, growing more conservative as their youthful silliness is replaced by wisdom born of experience. Liberal excesses and the obvious failure and hypocrisy of their policies slowly turn leftists into conservatives. Societal changes, demographic shifts, and economic ups and downs make for political

By ceding districts to the left, we allow them with their smaller numbers and energetic activists to focus on battlegrounds. We have more widespread, but usually less energetic, support. We need to fight them everywhere, and make them defend everywhere.

By ceding territory, we lose areas we might not, and interest of the local activists fades. That leads to voters who think we don’t care — even that we don’t care because of what they look like.

Finally, the biggest reason we need to compete everywhere is that a vote is a vote. The 10 votes we gain in an area that usually votes 90% the other way are the same 10 votes we might gain in a “swing” area.

What Is Wrong With Victory?

Instead, we need to have a local Precinct Committeeman in each precinct, who builds an ongoing relationship with the voters in it. He or she should have a team of people who will call their neighbors and knock on doors, and be advocates for conservative values in the convenient store and the church parking lot. By doing that we can try to win everywhere, all at once.

Are You Humble Enough?

Going around knocking on doors, instead of attending a fund-raiser a candidate, requires humility. Speaking as a blogger to other bloggers:

Have You Served Your Country?

Why Are You Doing This?

I introduced what I not-quite-cynically called The Reagan Quadrant. Reagan never explicitly used this chart, of course, but in all of his speeches you can see it. He wanted people to adopt his conservative values, and that is what drove him.

The horizontal axis of the chart is simply Left versus Right, in the usual sense that we all recognize. I’m not trying to say anything profound with the labels, though books have been written doing so.

The vertical axis indicates motivation. Is your motivation for what you do in politics the ideals and principals you want to see furthered, or is it the acquisition and retention of political power?  Everyone has a mix of these motivations, and sometimes it’s difficult to decide how we ourselves are motivated. Do we want to win some election because it will advance our cause, give us a job, or will make us more powerful so that we can further our ideals? 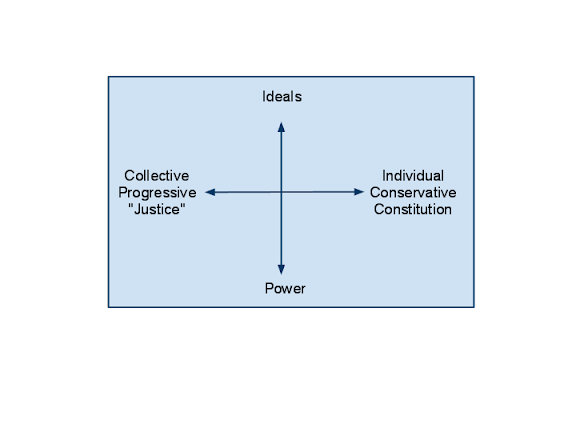 That is the real question: do you want political power to advance your agenda, or do you mouth the words about advancing some set of ideals to gain power for yourself? As I said, everyone has mixed motivations.

In the video I assert that RNC chair Reince Priebus is a conservative motivated to power. I’ve never met Reince, so I judge only by what I hear and see. The caveat that everyone has mixed motivations applies especially here.

Another example of the application of this chart is the the tough time Barack Obama is having. We on the right don’t like him because he’s a committed leftist. But on the left, they are growing disillusioned with him because his motivation is the retention of his own power, more than furthering the ideals they share.

In the precinct movement, we want people who are motivated by constitutional conservatism to enter the political party of their choice and turn them all slowly back to conservative principles. It will take a long time. We’re not going anywhere.

The second video above doesn’t make it clear, but people kept coming down in waves to indicate that they will become PCs.

A growing number of Redstaters have realized that the way to influence the parties is on the ground, as precinct committeemen. If you are ready to join us, say so in the comments.

To learn more about Precinct Activism and turning out the vote for conservative candidates, visit The Precinct Project.

Bad News, Republicans, Joe Scarborough Says He Won't Come Back to the GOP Even if We Beg
streiff

The Re-Rise of the Sycophant Media Is Upon Us

Trump Legal Team Scored a Big Win in Nevada. Could It Lead to a 2020 Bombshell?
Townhall
Alyssa Milano extends an olive branch to Trump supporters – It doesn’t go well.
HotAir
Denver mayor humbly asks you to forgive decisions 'borne of my heart' after he flies for Thanksgiving
Twitchy
Obama Mocks Pro-Trump Hispanics, Pro-Lifers, and Evangelicals in One Statement
PJ Media