Tales From the Mid-Western Front - Missouri vs. Coronavirus in Mid-April 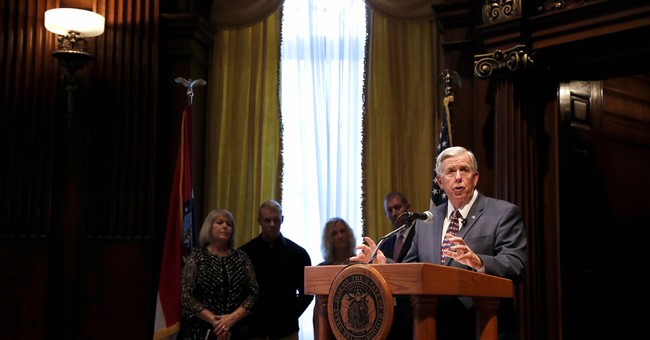 Missouri Gov. Mike Parson speaks after being sworn in as the state’s 57th governor following the resignation of Eric Greitens Friday, June 1, 2018, in Jefferson City, Mo. Parson moved from lieutenant governor to governor after Greitens stepped down Friday amid investigations of his political and personal life.(AP Photo/Jeff Roberson)

Yesterday, Missouri’s Governor, Mike Parson, announced that Missouri’s Stay-at-Home order was being extended and would remain in effect through May 3rd, as reported here. So, now seems like a reasonable time to examine how Missouri doing in terms of “bending the curve”.

Missouri’s first confirmed case was announced on March 7th. Per Worldometers, as of today, April 17th, at 3:30 pm CDT, with 51,545 people tested, Missouri has 5,283* confirmed cases of COVID-19, with 168 deaths attributed to it. (This puts the current Mortality Rate at 3.2%, recognizing that this is a rough approximation and obviously doesn’t take into consideration undiagnosed/unconfirmed cases.)  This places Missouri 21st (among the states) in total number of cases, 21st in total deaths, 28th in cases per million people, and 26th in deaths per million people. So, basically, in the middle of the pack.

The Missouri Department of Health & Senior Services provides a breakdown of the cases and deaths by county, along with a breakdown by age range and race/ethnicity. By the looks of the “new cases reported” per day, the curve appears to be beginning to bend in Missouri. (But see note below.)  Not surprisingly, the counties with the highest case and death totals are the most populous ones: Jackson County, Kansas City, St. Charles County, St. Louis City, St. Louis County. 23 of Missouri’s 114 counties have zero confirmed cases. 58 others have fewer than 10.

Per IHME, Missouri has implemented 4 of the 6 “government-mandated social distancing” measures, including closed schools, mass gathering restrictions, and the aforementioned stay-at-home order. Some counties and cities (largely those with the higher case and death totals) have issued more stringent restrictions. While the St. Louis region is predicted to reach its peak in cases on April 25th, the IHME model is predicting Missouri is already three days post-peak in daily deaths. And what initially was predicted to be a significant shortage in hospital beds and ICU beds has since been revised down significantly.

On the anecdotal side, in the St. Louis region, many businesses and parks are closed. The streets aren’t deserted but traffic is considerably lighter. Most people at the grocery store/Target these days are sporting masks, some are sporting gloves, and most are at least attempting to maintain a six-foot distance from others. Even while I’ve been out on walks, people are making a point to step off to the side or momentarily out onto the street in order to avoid passing too closely on the sidewalk.

If Missouri’s number continue to move in the right direction, I’m hopeful that by the time May 3rd rolls around, we’ve begun a measured, rational, data-based re-opening. (Frankly, I think it should be before then for minimally-affected areas.)

Let us know what you think in the comments!

*Per KMBC, Johns Hopkins University Coronavirus Resource Center is reporting a significantly higher number (5,560), which, if accurate, would represent the largest one-day jump (over 400) in total cases for Missouri. Given the significant disparity, I will be following up on this aspect of the story to see how it shakes out.