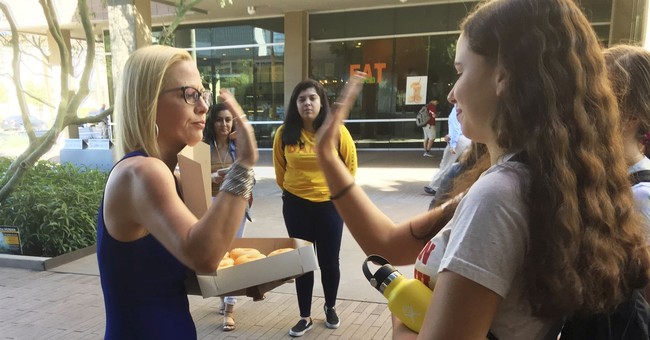 Democratic Senate candidate Kyrsten Sinema, left, high-fives an Arizona State student who said she voted for her on the Arizona State University campus in Tempe on Monday, Nov. 5, 2018. Sinema, a congresswoman who teaches at the school, closed out her campaign against Republican Rep. Martha McSally with a dash across the Phoenix metro area. (AP Photo/Nicolas Riccardi)

In the never-ending slap-fight that is D.C. politics these days, the PPP portion of the CARES Act — the Paycheck Protection Program that provides loan assistance for small businesses to help with payroll and other critical expenses during the economic chokehold placed on them compliments of COVID-19 — has hit a snag.

Though the package initially allotted $350 billion for the program, that well’s already run dry and efforts to inject additional funding into it have been met with resistance by Democrats focused on satisfying their own agendas. As my colleague, Nick Arama, has reported previously, Nancy Pelosi and her cohorts have signaled they’re in no hurry at all to approve additional funding:

Republicans asked for $250 billion more to keep the program going and helping people. Nothing else. Simple clean bill. Democrats had already agreed to all the terms of the program in the original bill. But they refused to refund it and blocked passing it this past week. That will likely throw millions more Americans out of work and cause countless businesses to go under unless they change their minds immediately.

Meanwhile, Democratic House Majority Leader Steny Hoyer announced that the House wouldn’t be meeting again until May 4, “absent an emergency.”

The kicker? Here’s House Speaker Nancy Pelosi, bragging about how proud she is that Democrats blocked the bill, she congratulated the Senate Democrats for blocking it.

Nancy Pelosi: “I congratulate the Senate Democrats” for objecting to $250 billion in small business reliefhttps://t.co/IdRmdfgYwx pic.twitter.com/KDT9tZZ8b3

Not surprising, I suppose. Infuriating, though. Particularly when you consider the plight of small business owners trying to hang on by a thread while nonchalant Nancy serves up delicious designer ice cream out of her high-end freezer.
Thankfully, there are still some lawmakers more focused on getting the needed assistance to the American citizenry. Krysten Sinema (D-AZ) has been vocal in her support of the PPP — including the additional funding which now appears needed.
A week ago, she tweeted:

I support providing additional funding to the PPP to help AZ businesses keep workers employed during this public health crisis. The Senate should act this week to further fund the PPP by unanimous consent.

Today, she followed that up with this:

The PPP program is going to run out of funding soon – the Senate should approve add’l funding by unanimous consent ASAP. Small businesses need our help to survive during this emergency. https://t.co/kYTbjGHCXM

So, while Nancy’s exhorting her fellow Dems in the Senate to block this added relief, Sinema is calling on them to approve the funding ASAP via unanimous consent.
Yes, she’s a politician. But Sinema seemingly appears capable of placing people above politics.
Refreshing. And all too rare these days.
Share
Tweet

Why the 'Power Grab' Case That's Heading to the Supreme Court Could Give the Left Fits
Townhall
Alrighty then: Jim Carrey is leaving Twitter … we say goodbye with some Jim Carrey movie quotes
Twitchy
Biden COVID 'Lead' Inadvertently Says the Quiet Part out Loud on Censorship
Redstate
4 Reasons Police Haven't Arrested or Named a Suspect in the Idaho 4 Murders
PJ Media